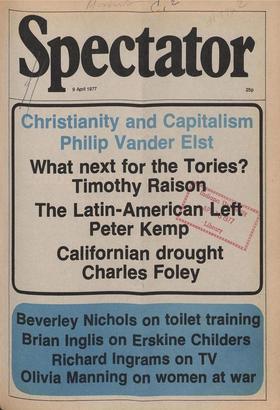 Wounds in the SALT

I s detente at an end ? Is the collapse of the latest talks on sdtrategic arms limitation only a temporary setback, or „ D es it mean that a new period of acute tension between...

After Stechford John Grigg Stechford was indeed a blockbuster— psychologically even more than psephologically. It came at a time when Labour badly needed an electoral fillip,...

The most exciting place to spend Easter in is Rome, despite the charabancs of pilgrims and tourists which jam and pollute the s r ,treets around Saint Peter's Square. Easter D...

Left against left in Latin America

Peter Kemp On the left bank of the river, about a hundred yards ahead, the jungle fell away to a small clearing, from which a wooden jetty protruded into the water; the pilot...

Boer War on the box

Richard West The Soweto riots, the Russian threat and the economic recession have all during the last year stirred the emotions of white South Africans, but perhaps none has...

Charles Foley San Francisco It isn't really funIV, but Californians are doing their best to laugh about the two-year drought which is re-introducing them to toilet-training,...

David Levy Moscow Imagine being in the middle of reading The Day of the Jackal, Jaws and The Godfather, then suddenly having all three novels snatched away from you, with...

The present of knowledge

Christopher Booker There is a strange mood abroad in Western civilisation at the moment—a general sense that, after the frenzied forward rush of the 'sixties, we have suddenly...

Beverley Nichols Now that Nancy Mitford has left us and Evelyn Waugh is communing with the Saints and John Betjeman is busy with royal occasions. . now that these leading...

A dose of garlic Marika Hanbury Tenison There must be more stories about garlic and its magical properties than about any other ingredient used in the kitchen. Look through...

Sir: Journalists, with all due respect to the Profession, do sometimes tend to get the wrong end of the stick when they stray off the familiar ground of reportage. Journalists...

S ir: When an obvious know-nothing like C. Cummins (5 March) has a piece of ones work 'come to his attention' that is one s in g . But when Mr William F. Buckley (6 March)...

Sir: Mr Davey (Letters, 26 March) is either indulging in subtle republican propaganda or in hideous mixed metaphors. If the Queen is indeed 'the cornerstone of the arch of the...

Sir: Antonia Martin's article under this heading (5 February) struck me—a Welshman who understands the language—as true, singularly well-informed, and, above all, necessary. The...

Sir: According to the story handed down in my family, Wild Dayrell's curse on the Pophams stated that 'no eldest son will ever succeed the father.' It might be of interest to...

A patriot for me Brian Inglis The Riddle of Erskine Childers Andrew Boyle (Hutchinson £6.95) The riddle is simply stated how did it come about that Erskine Childers, English...

Olivia Manning When Miss Emmie Was in Russia: English Governesses Before, During and After the October Revolution Harvey Pitcher (John Murray £5.95) Women at War 1914 - 1918...

Peter Ackroyd Blind Ambition John Dean (Simon and Schuster £4.95) This book, if it were accurate. wou ld repiesent one of the most astonishing fea ts of memory since the days...

Collecting or investing? Eugene Victor Thaw The relationship to works of art of those fortunate enough to possess them has changed radically over the last thirty years. At...

Script-itis Clancy Sigal Silver Streak (Odeon Leicester squa re) The Eagle Has Landed (Empire) Jabberwocky (Columbia) It never ceases to amaze me how much talen t ' energy and...

Double take Ted Whitehead Present Laughter (Royal Exchange, Manchester) In the Red (Whitehall) It's a nuisance if someone insists on loving you when you don't want them to or...

Sleep awakes Jan Murray Members of the Royal Opera House audience looked somewhat battered as they stumbled out into the rain, the hands of the clock approaching eleven. It...

More boredom Richard Ingrams A nY public-spirited attempt 1 make to Pursue my researches into the medium more dili gently seems always to lead to frustration and...