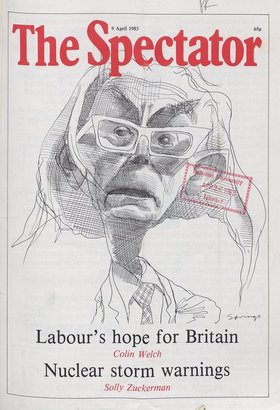 Excess baggage Now is the time for policy-making. The parties are mustering or, rather inventing the arguments which they will put in their election manifestoes. This is much...

Political commentary Labour's hope for Britain Colin Welch A 34-year-old teacher with no medical training whatsoever recently got six years for carrying out at his 'private...

Notebook Lx Africa there is always something new, the saying goes. What comes from Africa today is rarely novel, just grim. The latest murders in Matabeleland add to the...

Another voice Gay Resurrection Auberon Waugh On Good Friday Roman Catholics still hold a service called the Mass of the Presanctified which includes a passage normally...

A tale of two Germanies

A tale of two Germanies Timothy Garton Ash Berlin She was dressed much like any other West German girl. But as soon as she spoke I knew she was from the East. The...

Birth and death on the Nile

Birth and death on the Nile Henry Porter Luxor I remember now that the large girl from Lancashire made several trips across the top floor of the Horus Hotel to the communal...

Up the pole Sir: Your correspondent Mr John Evans (Letters, 26 March) is of course correct in his reference to the technical naval use of the term Union Jack. However, this...

Literally yours Sir: I notice that P. J. Kavanagh (19 March) places the blame at the typesetter's door for the misspellings in the Times. There appears to be a widely-held...

Hard to place Sir: The Revd Donald Reeves of St James's Rectory, Piccadilly, states (Letters, 2 April) that 'we certainly are liberal and left.' Who are (or is) the 'we'? Is it...

Letters Ornithosociology Sir: Colin Welch (26 March) asks about the principle used by Labour MPs to criticise government policy which is based on the majority at work at the...

I Sir: Ian Waller's article, 'The great hotel robbery' (26 March) wholly misses the point. The reason the sale price is low is due to the appalling managerial neglect of the...

The recruit Sir: I was interested to hear that Lord Shawcross has joined the SDP at the ripe old age of 81. During his heyday after the war when, as Sir Hartley Shawcross, he...

Sir: My sympathy lies with P. J. Kavanagh's 'Trifles' (19 March). Maybe he should start his crusade with the Spectator's typesetter who egregiously printed GrEnadian as...

Off the rails I Sir: Ian Waller on railway hotels (26 March) does not appear to have seen the design for the new Edinburgh Hilton. It is emphatically not a 'concrete...

Monarchs, Rulers, Dynasties and Kingdoms of the World Compiled by R. F. Tapsell

Books The captains and the kings A. N. Wilson Monarchs, Rulers, Dynasties and Kingdoms of the World Compiled by R. F. Tapsell (Thamnes and Hudson £18) In the middle of a...

History debagged Eric Christiansen The History Men John Kenyon (Weidenfeld and Nicolson £16.50) On History Michael Oakeshott (Blackwell £12) There are not many great...

The Monsters and the Critics and Other Essays J. R. R. Tolkien edited by Christopher Tolkien

Misconceptions Gillian Avery Dream Babies Christina Hardyment (Cape £9.95) I was a Truby King baby. My mother's sufferings under this tyrant were so extreme that she...

Professional, foul Francis King Rates of Exchange Malcolm Bradbury (Secker & Warburg £7.95) Like myself and like the emotionally anaemic hero of this novel, a linguist called...

Music Blind spots A. S. Henry Why is it that the majority of musiclovers assume, as if it were an ineluctable truth, that German Classical and Romantic music uniquely...

Television Venerable Richard Ingrams Tmhe oldest hath borne most: we that 'Tare young Shall never see much nor live so long.' The last weeks seem to have been a good time for...

Radio Fanciful Maureen Owen I have only one illusion left, and that is the Archbishop of Canterbury,' said Sydney Smith before his death in 1845. Illusion was the dominant...

Postscript Grown-up P. J. Kavanagh Reading George Orwell's letters and journalism with admiration, I came across this notebook entry (he was planning a piece on Evelyn...