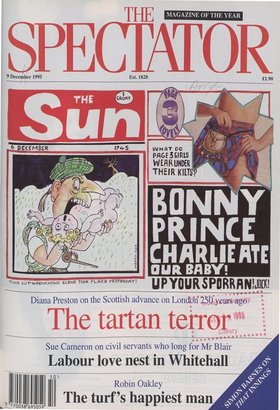 THE SCOOPER POOPERS Bill Hagerty on tabloid hacks who sell their own paper's exclusives; but he says it's still unusual DESPITE what I, as editor, thought was maximum...

IN DEFENCE OF THE AMERICAN WOMAN

IN DEFENCE OF THE AMERICAN WOMAN Cosima von Bulow admits that her compatriots have emasculated their menfolk - but insists it is only temporary AS ONE of Britain's many...

[Sir: I agree wholeheartedly with Digby...]

Sir: I agree wholeheartedly with Digby I Anderson that the English people are an impatient bunch. I, for one, could not wait to finish his article. Please, no more 'buffet car'...

Delaying delight Sir: Digby Anderson is right to point out ('Christmas comes but once a week', 2 December) that many delinquents have an 'inability to defer gratification'....

Invasion of privacy Sir: With reference to the Princess of Wales's interview, your leading article (25 November) was fair and objective, but I take exception to two of the...

L E T T E R S All rather rum Sir: I was rather surprised (though after some of your earlier range-finding shots from the editorial chair I suppose one should be surprised by...

Sir: Frank Johnson's outrageous anti-Di I piece (Leader, 25 November) must have been written with the sole intention of swelling your post-bag. Well, you're not catching me out...

Sir: I understood Goering kept it (cyanide) in his commodious navel. If so, it could have heen there for some time undetected. Dr Ross Watkin Pigeonhouse Cottage, Rectory...

Price war Sir: Some of the more illustrious men's outfitters who place regular advertisements with The Spectator will find little cheer in the fact that, having received a fat...

Dej'avu Sir: Your article comparing the Princess of Wales with Catherine the Great is a reminder of other past similarities ('Diana: weakness up in arms', 2 December). In 1682...

Funny peculiar Sir: David Starkey implies that a central argument in my recent book, Virtually Normal, is that homosexuality is genetic ('Tis in ourselves that we are hetero or...

Storage problem Sir: John Kinsman (Letters, 2 December) is wise to disbelieve the 'explanation' that Goering's fatal dose of cyanide was stored by him, throughout a full year...

Sir: Surely Goering stuffed his cyanide cap- sule up his rectum every morning? To swallow it even with a 'protective lining' and try lto recover it when it came out would have...

Space holidays and better sex John Michell THE NEXT 500 YEARS: LIFE IN THE COMING MILLENNIUM by Adrian Berry Headline, £16.99, pp. 338 Looking from my window at the...

A writer and her work

A writer and her work Julian Mitchell IVY: THE LIFE OF IVY COMPTON-BURNETT by Hilary Spurling Richard Cohen Books, £30, pp. 621 I first met Ivy Compton-Burnett in 1962, when...

Funny Christmas books Richard Ingrams No one ever sold anything like as many funny books at Christmas time as the late Carl Giles with his succession of cartoon annuals. So it...

The west yet glimmers

Theatre Break of Day (Royal Court) Hysteria (Duke of York's) So what? Sheridan Morley V V e drama critics are an ungrateful lot: we complain, with some justification, that,...

Opera and vocal records Playing safe Rupert Christiansen N ot a vintage year, but there were a few nice surprises among the dross. Philips deserves a special accolade for its...

Salerooms All I want for Christmas ... Alistair McAlpine F licking idly through Christie's catalogue of their New York sale '100 Years of the Cinema' (11 December), I began...

Television Mmm's the word James Delingpole Ts the season to knock Delia. But I'm not going to. Not her culinary legacy, anyway. She may be a frump; she may have an annoyingly...

Motoring Counting the cost of love Alan Judd JLong ago, when Exchange & Mart introduced the category called Collectors' Cars, I felt I was being done. I bought old cars...

The turf Quality will out Robin Oakley T he first time I met Graham Bradley, one of the most stylish and durable of National Hunt jockeys, was at Newbury two or three years...