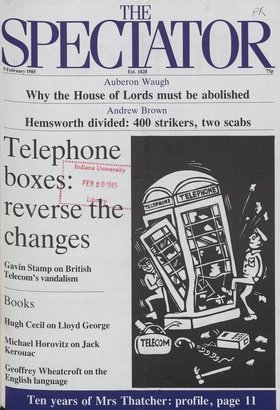 Politics The threat from Thanet Those who have followed the 'SueEllen' libel case may imagine that it is a freak. They may think that the plaintiff, Mrs Hazel Pinder-White, of...

Oxford, revenge! Just as it was generous of Lord Stockton to defend Mrs Thatcher, or rather to reproach the dons of Oxford for their despicable vote of ten days ago, so it was...

Antisocial disease Socialstyrelsen is a mysterious and probably untranslatable organ of the Swedish government previously known, if at all, to Spectator readers for its...

The Pope in Peru

The Pope in Peru Sendero Luminoso, the Peruvian guerrilla band, has this week demonstrated how difficult it is for churchmen to have the Political effects they intend, by...

[Mr Terry Waite, whose attempt to...]

Notes | 4r Terry Waite, whose attempt to M secure the release of four Britons detained in Libya was on Tuesday crowned With success, had earlier bought the cartoon which...

Another voice The big lie Auberon Waugh Various conclusions have been drawn from the appalling spectacle of the House of Lords on television. I find myself "I agreement with...

India spies a record Dhiran Bhagat Delhi In a country where even exceptions run into millions it is hardly surprising that the people are obsessed with records, with the...

Where babies go to

Where babies go to Christopher Hitchens Washington In October 1930, Evelyn Waugh turned in a review of a wonderful book called Sins of New York. Written or at least compiled...

Death and birth of Julia

Death and birth of Julia Charles Glass St Julia began and ended her life as both a virgin and a noble. Her road to canonisation started in 439 when pagan soldiers kidnapped...

Return to Hemsworth Andrew Brown The strike is still solid in Hemsworth, a small town between Barnsley and Pontefract in the heart of Arthur Scargill's territory but the mood...

Jobbing forwards W hile Threadneedle Street leads intO Memory Lane, you might care to remember or guess which Governor had this to say about sterling and markets: 'Finance...

City and No, Sir John Sir John Nott was a merchant banker before he was a minister. When, with the Falklands war concluded, he stood down as Secretary of State for Defence, he...

Good Tax Guide? Champagne and oysters at Scotts Restaurant, where the gentlemen's lavatory once made the Good Loo Guide on the nomination of the Spectator's Miss Jennifer...

A touch of snakebite

A touch of snakebite That old Snake is rearing his seductive head again. As sterling struggles along, barely responding to dear money and official support, it is tempting to...

Free quotation Sir: I write with reference to the item in Notes (2 February) on the 1985 London Conference on Communism and Liberal Democracy. I regret that a mistake was made...

Merger Sir: How satisfying to see the Spectator and Guardian's women's page combine. Poor Beryl Bainbridge (Diary, 2 February), and her dear friend Laurie and her baby by her...

Major-General Gordon I Sir: In his interesting article about Gordon and Gessi (26 January) Roy MacGregorHastie wrote that 'unlike David and Jonathan they were divided in...

English tea Sir: Ausonius (Wine, 2 February) need have gone no farther than Brown's Hotel for a proper English tea. This time last year, when the weather was cold and...

Home life Sir: Not knowing him, I wish Taki no ill. However, if it allows us to continue reading Alice Thomas Ellis's 'Home life' for a long future, I would wish him a...

Letters Wife's earnings Sir: One way of bringing down the level of unemployment among young people would be to abolish the Wife's Earned Income Allowance. This was introduced,...

Jargon Sir: Paul Johnson referred (The press, 19 January) to a left-wing article, recently published in the Guardian, as 'written in the most appalling jargon throughout'. On...

Books A bounder of genius Hugh Cecil Lloyd George: From Peace to War, 19121916 John Grigg (Methuen £19.95) He is a wonderful person in some ways J but is totally devoid of...

Bugbears Geoffrey Wheatcroft The English Language Robert Burchfield (Oxford £9.50) The Kiwi contribution to English': a resonant title, and no doubt someone 4working on it...

Lies, all lies Gillian Greenwood Star Turn Nigel Williams (Faber £9.95) There is a refreshing exuberance in the style and subject matter of Nigel Williams's Star Turn, a...

The Laughter of Carthage Michael Moorcock

A Holiday in a War

A Holiday in a War The dell was mushroom-dotted; white, to snowy-blue where trees cast deep leaf-shadows. Who cried, 'Glorious fungi!'? Whose sneeze made me jump as if scalded?...

Rights Monkey rights are monkey business, Simply simian. We cook our geese And settle our hash. We are Primates inter pares, Our grunts are full of grace. We don't ape others....

Theatre Black on white Kathy O'Shaughnessy The Government Inspector (National: Olivier) Gogol had a deep and dark vision, and a magnificent sense of the comic absurd at the...

Music Lecturing Peter Phillips Venice Venice famously contains within its boundaries the artefacts of many different periods. Outstanding in several ways are those of the...

Gardens An open season Ursula Buchan iving in the country has certain grave disadvantages: the serious shortage of ice-cream parlours and bottle-banks, the inability to...

Television The Day Before Alexander Chancellor It is just over a year now since the American nuclear horror film, The Day After, was shown on British television. It...

Home life School report Alice Thomas Ellis Our youngest child recently started at secondary school but has refused to attend for the past few days for fear of being beaten...

Postscript Nick's Law P. J. Kavanagh A Law operates in the world which is A not exactly Murphy's Law, or Sods' Lav; it is more important. It seems to be a a\wv whereby things...

Z-10 . 1--f Not for the feast Candlemas, the Purification, yesterday, such a lovely feast day, all children should be taken to it. I remember as a child being delighted to...