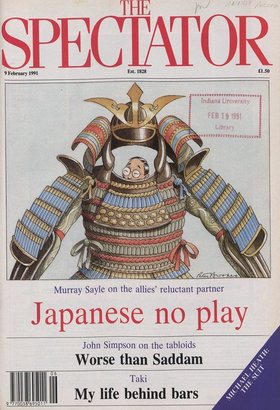 If symptoms persist . . . THE first casualty of the Gulf War was not Truth, but a 16-year-old girl who, on the evening hostilities broke out, took a small overdose of...

SPECTATORS FOR RUMANIA, POLAND AND EASTERN EUROPE Dominic Lawson writes: Two years ago we appealed to our readers to buy half-price subscriptions to The Spectator which we...

[The good news is that the cash squeeze...]

CITY AND SUBURBAN I I The streams of cash dry up - here come the casualties of drought CHRISTOPHER FILDES |I he good news is that the cash squeeze on business cannot go on...

Arms and the City man

Arms and the City man | I WORRY about the market's champagnebar generals, who now expect to see Saddam Hussein knocked for six right out of Arabia. One of them told me that the...

Hoppy's big stick DAVID 'Hoppy' Hopkinson takes up the cudgel on dividends. They are (as I was saying here) a particular obsession of his old shop, the M & G Group, and Paddy...

Mercenary calling BOOSTING our invisible exports is all very well, but Edward Heath, who thinks we have gone into the hired-gun business in the Gulf, has got the wrong end of...

Leith police Sir: I am no strategist either of the armchair or the other variety so cannot comment on Mr White's criticism of Mr Waugh's opinion of Arab affairs (Letters, 2...

Lavender's blues Sir: This is the story of David D. Whenever the telly's on so is he, At the risk of annoyance to you and me. He was born to impeccable ancestry, Though his...

L E T T E R S Counsel of war Sir: Theodore Dalrymple has come away bewildered from a gathering of counsellors preparing for clients from the Gulf (If symptoms persist . . . ,...

Off the rails Sir: The leading article of 25 January ('Guns before BR') must win the prize for the most improbable in a long list of Gulf waffle (guffle?). Your connection...

Sir: If Mr Menhinick wants an acknow]ede- ment of his generosity, he would be better off writing to the head of the local grammar school, not Spectator readers. E. Creak Old...

Coram's children Sir: Some months ago you published an article of mine on Captain Thomas Coram ('A foundling father to our children', 21 October 1989) to mark the 250th...

Chorister Kingsley Sir: It may seem churlish to pick a hole in such a kind review as Roger Lewis's of my gathering of journalism, The Amis Collection (Books, 26 January), but...

Word of war Sir: Propaganda is a recognised weapon in war-time. The continuing abuse of prisoners of war by Saddam Hussein is surely impropaganda. Diana Heimann Hcrtfordshire...

Disgruntled Sir: Are you not aware that your metaphor (Leading article, 5 January) regarding 'popular vested interests with their snouts in the pork-barrel' is not only mixed...

Not a very special relationship Ross Clark FRANCESCA by Roger Scruton Sinclair-Stevenson, £13.95, pp, 236 All over London, and some way into the shires, there are journalists...

Shrove Tuesday That evening, over pancakes, when you told me it was not for love, not even for money but just for the children, then ran through those several other women; I...

Since Such Beauty Since such beauty on the air From a leaf was wafted here, Of a sudden you stood still, And the talk began to pall. You who tread the earth, be sure Even now,...

Not the luckiest of generals John Grigg FIELD-MARSHAL AUCHINLECK by Alexander Greenwood I The Pentland Press, £l7.50, pp. 320 O f the five men with Ulster connections who...

JEAN BATTEN: THE GARBO OF THE SKIES by Ian Mackersey

Romance above the clouds but not beneath Montagu Curzon JEAN BATTEN: THE GARBO OF THE SKIES by Ian Mackersey Macdonald, £14.95, pp. 396 Gigantic technical developments tend,...

Song to the Skinhead

Song to the Skinhead 'Ginger, you are going to die.' I am, but was that what you meant that summer night you cycled by as I was on my steady way home and watched you pedal away...

Television Conflicting conflagrations Martyn Harris The South Bank Show (LWT, 10.30 p.m., Sunday) devoted itself this week to a rambling essay on the film of Tom Wolfe's...

e l New life Maternal joys Zenga Longmore 'ou know my friend Amanda,' said my sister Boko on the phone last week, 'the one who thinks you're politically naive, and that your...

Low life Social history Jeffrey Bernard I bought a new toy yesterday which hopefully may turn out to be a moneyearner. It is a neat little tape recorder which I shall place...

- aIeeo ...... I Lambs to the slaughter i I A &J& , YI A I A PLETHORA of interesting feasts and saints this past week. The Purification of the Blessed Virgin Mary (Candlemas)...

SPECTATOR SPORT Confidence trick Frank Keating IF IT can happen, as Tommy Cooper used to say 'just like that', to prime ministers. then why not to lesser 'supremos of the...