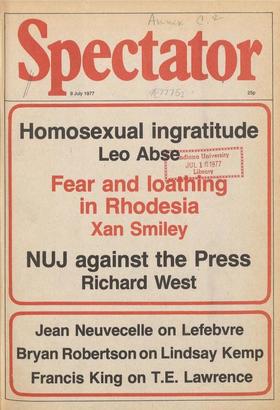 A time for ruthlessness

The fundamental Rhodesian fact of life that no Western leader has yet been prepared to admit in public is that there can never be a political settlement that can accommodate...

Callaghan's last hope John Grigg The Prime Minister survived last Monday evening with his salary intact (the SNP's move to reduce it by half -in effect a vote of no confidence...

I have tried to discover whether anybody has complained to the Press Council about The Times smear story on the late Donald Beves, for which it has now apologised without...

Fear of fascism Auberon Waugh One of the more enjoyabre of the leisurely debates being conducted in this country is on the point whether we have reached, or are about to...

Fear and loathing in Rhodesia

Xan Smiley A year or so ago the Rhodesian government published a booklet entitled Harvest of Fear It contained many gruesome photographs of 'victims of terrorism'. One picture...

Jean Neuvecelle Rome Econe is a nice place, clinging to the side of a Swiss mountain where the Rhone is still a turbulent stream and the vines, in the hot summer, are so...

Leo Abse New crimes and stiffer penalties are often speedily approved by legislators; but the abolition of ancient offences, however otiose, meets stubborn resistance. When,...

Who needs the NUJ?

Richard West Newspaper and TV reporters at Grunwick, the factory besieged by pickets, are only too well aware that their own National Union of Journalists is involved in the...

Timothy Raison When Anthony Crosland was Secretary of State for the Environment he initiated two major studies in his department — into transport and housing finance. The last...

Momentous Nicholas Davenport One must have some sympathy for Lord Ryder. It was no fault of his that he found himself caught up in two unpleasant incidents — the Bewbush land...

Aid to the Third World

Sir: Peter Bauer and John O'Sullivan (25 June) are to be congratulated on their timely and devastating demolition of the case for the New International Economic Order, and in...

Eire and the Empire

Sir: Mr. Ewart Milne is confused (Letters, 25] une). We were in the Commonwealth in the 'thirties. We did not leave until 1949. The headline in the Daily Express said: 'The...

Sir: Ian Davidson, in last week's article on Labour and the Common Market, refers to my assertion that electing a European Assembly does not necessarily make it democratic, but...

Sir: I hope it is not churlish of me to dispute some of Christopher Booker's statements in his kind mention of my book Fight Blight (4 June) but I feel that his negative view of...

Sir: 'Contrary to what most Victorians feared, the coming of democracy has brought into public usage not the language of the people, which was at least vigorous, but the...

Sir: I enjoy the Spectator, not only for its content, but also for its generally high standard of English. I was, therefore, appalled to read in Notebook (2 July) that George...

Sir: I am grateful to you and to Mr Levy for carrying further and with greater authority (2 July) some of the impressions in my Times article. I am only puzzled that Mr Levy,...

Sir: In a recent article (18 June) spinach is given undeserved nutritional eminence, although, since the facts have never been widely publicised, the author can be excused. For...

Sir: I am engaged in writing a biography of Subhas Chandra Bose (1897-1945) for Quartet, London. I would be particularly interested in hearing from his contemporaries at...

Fact and fantasy Francis King T.E. Lawrence Desmond Stewart (Hamish Hamilton E7.50) Writing of 'the little fellow who is labelled for posterity as Lawrence of Arabia', his...

The red and the white

Terence Prittie The Wines of Germany Cyril Ray (Allen Lane £4.25) Cyril Ray needs no introduction to lovers of wine. France may be his first love, but he has a remarkable...

Christopher Kininmonth Sicilian Carousel Lawrence DurrelF(Faber and Faber £5.25) With this book Lawrence Durrell returns to the Mediterranean islands. 'Islomane' and...

Peter Ackroyd If You Could See Me Now Peter Straub (Jonathan Cape E3.95) Ghosts and spirits are now solely the property of realistic fiction; what else does it have, in its...

Benny Green Cheyney's Law Patrick Cosgrave (Macmillan £3.25) In the old Spectator building in Gower Street there was a subterranean dining room at whose table a group of us...

Bruce, Kemp (and Lorca) Bryan Robertson This week saw the start of a new season by the Ballet Rambert and the world premiere of a new work (commissioned by the John Player...

Screaming Ted Whitehead Singles (Greenwich) Much Ado About Nothing (Aidwych) On Approval (Vaudeville) In 1971 a friend of mine was approached via an intermediary to see if he...

Kneale John McEwen In the catalogue to the jubilee exhibition of contemporary sculpture in Battersea Park, one of the most noticeable things is the difference between the work...

Solutions Helen Smith The architectural partnership of Darbourne and Darke extend their characteristic modesty, which runs throughout their design work, into the display of...

Mammon Richard lngrams To become a TV star at the age of ninetythree is unusual but it is the lot of Commissioner Catherine Bramwell Booth the grandaughter of the Salvation...

Eclipsed Jeffrey Bernard Eclipse day at Sandown Park last Saturday was fascinating. Lester Piggott proved once again and for the umpteenth time that he's just as about as...

Women at play Hans Keller We won't ever have another Wimbledon without the issue of women's tennis being raised, one way as well as another: Women's Lib has seen to that. This...