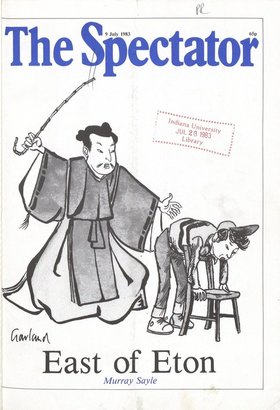 Hidden meanings E' xtra-Parlianilentary acltion' is a useFul phrase for Labour. When people complain that in advocating it, politicians and trade union leaders are questioning...

Political commentary The wromance of Mr Pym Charles Moore According to Sellars and Yeatman, the Cavaliers were 'wrong but wromantic'. If you insist on being wrong, it is...

Notebook People often ask ine what happened to the doctor about whom I once wrote in this Notebook - the one who cut off his wife's toes. Now that cancer has claimed him I can...

IhAnother voice Suitable case for treatment Auberon Waugh Perhaps we should be more alarmed than we seem to be by the fact that within an hour of Parliament's reassembling...

Apartheid of the tribes

Apartheid of the tribes Richard West In one of the most expensive bars of Johannesburg, I found the black barman talking about his family life with a well-dressed black...

Ranting at the Palace

Ranting at the Palace Roy Kerridge Is there a personality in our times whose influence in England can compare with that of Karl Marx? Yes, I believe there is. His name - Elvis...

Dead or alive? Colin Welch When the Emperor Menelik of Abyssinia died, full of years and honour, his advisers thought it injudicious prematurely to announce the fact. IFron...

Variations on a theme

Variations on a theme Sir: Reviewing my book, Under the AMSk, in the Sulnday Telegra-ph on 27 February, Richard West began: 'The left-wing author, Neville Dreadberg, who...

Black Fred Sir: There is in fact a sculpture of Frederick Courtenay Selous (Letters, 2 July), in safari: gear with rifle, in the Natural History Museum. Camdenites need not...

Beyond the bounds Sir: Nigella Lawson has overstepped the bounds of constructive criticism in your colulims when reviewing (11 tIune) the score of real-life crime tales...

[Sir: Those who complain that the Belgrano...]

Sir: Those who complain that the Belgrano was attacked and sunk whilst clearly on a course for an Argentinian port seem to forget that in March 1941 the Bismarck was on course...

The shaddock Sir: The shaddock (Elizabeth Berridge, 2 July) is a coarse grapefruit brought from the East to the West Indies by Captain Shaddock nearly 300 years ago. Its thick...

Sic et non Sir: I quote Alexander Chancellor (Notebook, 25 June): 'The Sunday People organised an opinion poll which showed that 90 per cent of the population would like...

Letters Etonian problems Sir: In your Notebook of 25 June you refer to the absence of Etonians from the Cabinet. No doubt the school will be looking at ways to counter this...

The Belgrano incident Sir: How does Simon Jenkins (Letters, 2 July) reply to this question: Why was the Foreign Secretary not informed immediately the Prime Minister...

Sir: As the (CO (t a gunboat in World War I Iwo, Ima-ty I be plermitlred to make olle furIlher comniltCi on the Belgran;o incident. In wart thie top priority is to will. 1I'...

Negrification - - - Max Egremont The Lasl Summer Kirsty McLcod (Collins £10.95) The suminner of 1914. Golden youths about to be cut dowvn in their prime. A world ignorant of...

Gruesome Peter Levi The Collected Stories Dylan Thomas (Dent £8.50) D ylan Thomas might have been alive today. He never lived to be 40; he died 30 years ago- of playing a...

Promising Francis King The Windsurf Boy Bel Mooney (Cape £7.95) Telling Tales Sara Maitland (Journeyman Press £3.75) Nothing is more destructive of promise than to have it...

The Crimes of Vautrin (Almeida) The Perfectionist (Hampstead) Woza Albert! (Criterion) Fiddler on the Roof (Apollo Victoria) Theatre of the Film Noir (Tricycle)

Television No change Richard Ingrams One of the pleasures for the television critic of being on holiday is to look at the television schedules in the newspapers - in Malta...

High life Breast-beating Taki New York Thank God Wimbledon is over; tlhe matches I watched seemed like war, as if the participants had lost the idea that tennis, after all,...

Low life Bucking broncho Jeffrey Bernard Last Tuesday was as nasty a day as I call remember. I had a bronchoscopy at the Brompton Chest Hospital and it made my eyes water I...