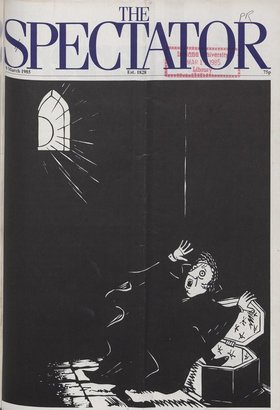 I Portrait of the week The miners' strike ended. Delegates at a special conference voted 98-91 for an official return to work, knowing that otherwise men would continue to...

Politics What about the workers? It was the South Wales miners who first devised the formula of an organised return to work without an agreement. It is a characteristically...

Jenkin: save the City

Jenkin: save the City Mr Patrick Jenkin is keeping us all on tenterhooks as we await the verdict of last year's mammoth Mansion House Square public inquiry. The Inspector's...

[Whatever could be wrong with running...]

Notes W hatever could be wrong with running _up a budget deficit? The Treasury always does so. And why make a distinction between income from the sale of capital assets and...

Grace and favour The Government wishes to let many of the rooms at Hampton Court. It is said that several of the 'grace and favour' residences are empty, and that there is...

Nicaragua The Sandinistas have reacted with unusual forebearance to President Reagan's threat to get rid of them if they don't 'shape up'. Daniel Ortega promised to send home a...

Hating the abortionists Michael Bywater San Francisco While Christopher Hitchens was in Washington wondering 'Where babies go to' (9 February), I was wandering around San...

Lessons of history Bob Houston While the Kent Apaches are being rounded up after their last desperate breakout, the mopping up operation goes on. Betrayed by the TUC, the...

Britain's defence Strategic senility Michael Chichester W hen faced with the need for fundamental change in an historic policy mllnisters are confronted by what Professor...

Letters For the record Sir: The coda of your unsigned Lenten silly season 'profile' (with its solemn 'survivors' euphemism for the expression 'wrinklies' nowadays more often...

Near miss Yet I suppose that if I had not been narrowly missed by the bomb aimed by a low-flying Luftwaffe pilot at Fort Cumberland outside Southsea, which did for the writer...

White tie I may well once have mentioned tO someone that there had been one single week in my life, in 1948, when I could recall having had to wear white tie and tails (but not...

Index of civilisation Sir: I am happy to say that Beryl Bainbridge is wrong about her native Liverpool (Diary, 23 February). I know of at least three secondhand bookshops in...

Budd's books Sir: It is not true, as Beryl Bainbridge suggests (Diary, 23 February), that there were never any secondhand bookshops in Birmingham. In the late 1940s, at least,...

In a cool climate

In a cool climate Sir: It is not reasonable of Wilfred De'Ath to reinforce his loathing for mass murderer Dennis Nilsen (Books, 23 February) with a personal aversion to the...

Chesterton and the Jews

Out of context Sir: May I have the courtesy of your columns to point out that the selected extracts from my book (Dear Church, What's the Point?) quoted in Auberon Waugh's...

Artistic bark Sir: I appreciate Rodney Milnes's image of the arts ('Neatly ringed', 16 February) as a doomed forest all the more because I came across 'the old German laws for...

Books The Great Dictator Sarah Bradford Chaplin: His Life and Art David Robinson (Collins £15) Was Chaplin really that funny? In 1925 the BBC devoted no less than ten...

Magic without a god Ferdinand Mount Alien Powers: The Pure Theory of Ideology Kenneth Minogue (Weidenfeld £16.95) A nasty little word. Or rather a nasty, daunting...

Hannah and Caroline Francis King Other Women Lisa Alther (Viking £8.95) Whenever some American confides in me that he or she is 'in' analysis, I shrink away as from a...

Able to astonish Peter Levi The Brandon Papers Quentin Bell (The Hogarth Press/Chatto & Windus £8.95) There is something frightening about the attempt to command attention...

Too prickly to be true Ronald Hingley Solzhenitsyn: A Biography Michael Scammell (Hutchinson £18) 'though Solzhenitsyn has become less Tnewsworthy with time, he still seems...

Song Others shall live instead of me The old say, with a silly grin. What pleasure in a withered skin! The real life is all within. And then the others? God, they stink, They...

The Road to Mecca The Caine Mutiny Court Martial

Records Interference Peter Phillips All this talk of new orchestral music by Schubert (for instance his 'Tenth') has set EMI vibrating in sympathy. Last month saw the release...

Dance with a Stranger

Cinema Dance in the dark Peter Ackroyd Dance with a Stranger ('15', selected cinemas) Those who see this film will no doubt be aware of its sad conclusion and, since the air...

High life Acknowledged Taki s I was saying before I was so rudely interrupted, one never knows who one's true friends are until one is safely ensconced in a 7x14-foot cell in...

Low life Man of letters Jeffrey Bernard I used to think that one of the nicest and cosiest things about the Spectator, apart from the contributors, was the sort of person who...

Home life Spectral Alice Thomas Ellis The many-toed or arboreal cat is on heat again. Each evening there are frightful screams from the garden and we rush out to rescue her...

, ,A Lenten layers Here we are well into Lent, the withdrawals are withdrawing, dear Father Ignatius of the Oratory is giving us straight from the hip stuff about gin and sin,...