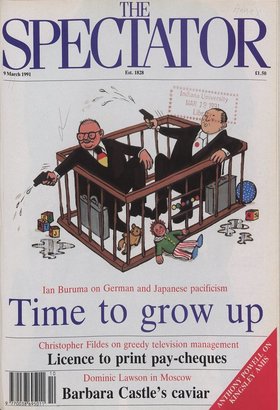 P O L I T I C S Michael the Magpie takes a shine to a guaranteed flop NOEL MALCOLM B y the end of this week, all the working parties of the next Conservative manifesto will...

ANOTHER VOICE _ The hungry sheep look up and get their coffee C H A R L E S M OO R E It is a well known feature of life in the Church of England that one cannot abide one's...

NOT JUST THE MAXIM GUN

NOT JUST THE MAXIM GUN John Simpson on the contribution of Iraqis to the allied victory THE scorched tanks on the road back to Iraq, the bodies sprawled under blankets, the...

If symptoms persist . . . ALL professions, except medicine, are conspiracies against the laity, but one is worse than all the others put together. I refer, of course, to the...

The last to learn

The last to learn THESE licences are not exclusive to the television companies. Many other boards took the view that their members needed special encouragement. Burton is a...

[The directors of Thames Television...]

Cut from the top

Cut from the top I NOTE with amusement that another television company has taken a different approach to the franchise affair. This is HTV, which now has the franchise for...

LE TTER S British convictions I Sir: Like Virginia Utley ('Jury in the dock', 23 February) I recently served on juries at an inner London Crown Court, and like her I found...

Paying for science Sir: As one of the organisers of the letter to the Prime Minister which inspired your leading article ('The brainless drain', 23 February), I would like to...

[Sir: Virginia Utley does not name the court...]

I Sir: Virginia Utley does not name the court where she did jury service: it seems a rum place where a defendant can face a jury trial for the theft of a single inexpensive...

Sir: Congratulations on Mr Keegan's arti- I cle. This is something which really had to be written and I am sure that most of the country agrees with him. M. Fooks 5...

[Sir: John Keegan's commentaries on the...]

Sir: John Keegan's commentaries on the I Gulf war were superb. His praise of the British army is well merited. But he is wrong to lay into the Dimbleby brothers and Jeremy...

Sir: John Keegan is as entitled to his I expressions of contempt towards me and the Dimblebys as he is to his extraordinary musings on the relative cost of the BBC and the...

The BBC's war Sir: As an admirer of John Keegan over many years I was somewhat taken aback by his diatribe last week against the television opinion makers who, he says, have...

Taking the piss Sir: Auberon Waugh still lacks compassion. In his 2 March essay, he makes tremendous fun of Anna Raeburn - 'the agony auntie or whatever' - because she took...

Far, far away Sir: I see, according to a small article in the Times (February 18, page 8), that John Major will not meet the Dalai Lama of Tibet, because, in his own terms, 'It...

Whigging Sir: Ludovic Kennedy's dislike of Margaret Thatcher (Letters, 2 March) is inexorable. What would he have had instead - the consensus of the Heath and Wilson years that...

Sneezed at Sir: If Charles Truman (Eighteenth Century Gold Boxes, Books 2 March) really considers a book costing £125 to be invaluable to those with only a 'passing interest'...

Jowett redivivus Sir: Mr Christopher Fildes is rightly regarded as one of the more knowledgeable financial writers. Those of us who work in the money markets fondly believe...

Sonnet Time was when you and I would lie at night As in our graves - a stone-faced, silent pair Of effigies, the lady and her knight Grown thin with all the years of shared...

BIOGRAPHERS AND THE ART OF BIOGRAPHY by Ulick O'Connor

In fear of their lives Rupert Christiansen BIOGRAPHERS AND THE ART OF BIOGRAPHY by Ulick O'Connor Wolfhound Press, £12.95, pp. 120 For no very obvious reason, the reading...

NOTHING TO DECLARE by Taki

A sentence need not end in a full stop Rosie Johnston NOTHING TO DECLARE by Taki Viking, £15. 99, pp. 216 Is Taki a victim of society? After reading his book I should say so....

Watching 'Twin Peaks' While There's a War On

Watching 'Twin Peaks' While There's a War On So we see the rock line and the waterfall and the marvellously pretty young girls lie on their backs with their twin peaks...

Television Formula fatigue Martyn Harris Like a punchy old boxer, the BBC can still rise to the big occasion: the one-off film, or prestige drama series. It is the breathing...

Low life Party piece Jeffrey Bernard M y daughter was 35 minutes late for the 21st birthday party surprise I laid on for her in an upstairs room in the Groucho Club. It was...

New life A disposable invention Zenga Longmore No trace of last month's great snowfall can now be seen in Brixton. Until the other day, however, one obstinate heap of frozen...

/j = 47a r . 7=--, om?? Joyful refreshments La E I I IT'S 'THINK PINK' time again this Sunday. Laetare, Mothering or Refreshment Sunday at it is called in countries that...