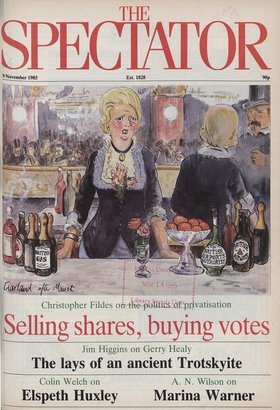 [In earlier and more primitive times,...]

THE SPECTATOR SUMMIT PRIMITIVISM In earlier and more primitive times, great battles were preceded by an indiVidual contest between the leaders or champions of each side....

TOO MUTCH READING the letters page of the Guardian or the Observer, one sometimes wonders whether correspondents are running a competition, using pseudonyms, to see who can get...

P O L I T I C S Not so much a pendulum, more a sort of hair dve FERDINAND MOUNT Is it imagination, or does the Queen's voice alter, ever so fractionally, when she finishes...

The fact of life

The fact of life Sir: Your new habit of offering a precis of articles is very helpful to those who do not have time to read them. But it can also be misleading. Last week you...

L E T T E R S --- I Master Aryee Sir: In attempting to enlist 'Ghana's attache to the UN' in his 'Cast of Villains' (High life, 5 October), Taki makes an allegation which...

Imported seconds Sir: In his admirable review of ENO's Don Carlos (26 October), Rodney Milnes aomadverts on the Royal Opera's failure to use the talents of Jonathan Summers...

Sod the public Sir: Your picture shown on the cover of the 19 October Spectator illustrating KingsleY Amis's excellent 'Sod the public' article lacks one person I really think...

OUT IN THE MIDDAY SUN: MY KENYA by Elspeth Huxley

XB O OKS Explaining blacks and whites Colin Welch OUT IN THE MIDDAY SUN: MY KENYA by Elspeth Huxley Chatto & Windus, £12.95 You could say of Mrs Huxley, as Johnson said of...

MONUMENTS AND MAIDENS: THE ALLEGORY OF THE FEMALE FORM by Marina Warner

Mindless, prolix and pretentious A. N. Wilson MONUMENTS AND MAIDENS: THE ALLEGORY OF THE FEMALE FORM by Marina Warner Weidenfeld & Nicolson1 £16.95 One can imagine the...

Clay pipes Here is the box with the pieces of clay pipe, stems like twigs, bowls swagged and ribbed, all cracked and chipped, but neatly docketed in your schoolboy hand. They...

The monstrous boy Sarah Bradford ORSON WELLES: A BIOGRAPHY by Barbara Leaming Weidenfeld & Nicolson, £14.95 Orson Welles was 18 months old and in his cradle when he first...

ARROWS OF LONGING by Virginia Moriconi

The Avenue (after Hobbema)

The Avenue (after Hobbema) This land is so flat the people who till these fields still secretly refuse to believe the world is round. They plant cabbages and potatoes. They...

Gardens Grass roots opinions Ursula Buchan There are times when I wish no one knew that I was a gardener for there is scarcely a party when I am not pinned against a wall to...

High life Hammer and sickle Taki New York | A .rmand Hammer is a billionaire, all art collector, a friend of Prince Charles, an intimate of Gorbachev, and the greatest...

Home life Potbound Alice Thomas Ellis I have far too much kitchen equipment, most of it seldom used, and I am never going to buy any more so I should like to advise the...

Low life Childabuse Jeffrey Bernard Just one final word about the Booker Prize. Talk about money for old rope. As soon as I heard that The Bone People had first been...

Postscript A dry time P. J. Kavanagh The Italian writer Primo Levi was asked on television, rather surprisingly, whether his experience in the concentration camp had affected...