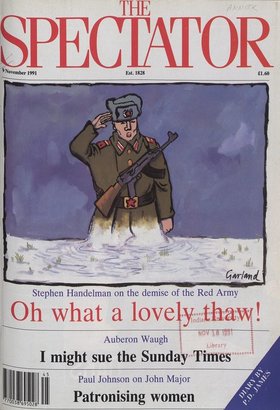 P OLI TICS Mr Major prepares to don his tweeds for England SIMON HEFFER In that difficult period before the Conservative leadership was prepared to admit that large sections...

ANOTHER VOICE The temptation of St Auberon AUBERON WAUGH The verdict in Roache v. Irwin, Mackenzie and News Group Newspapers, publishers of the Sun, where Bill Roache, an...

If symptoms persist. ... EVERY week I receive through the post several invitations to medical conferences. meetings, seminars and colloquia. Someone somewhere is under the...

Getting and spending POOR Norman Lamont - how tired he must be of whistling to keep other people's spirits up. First it was his party (all those green shoots), then the IMF...

The man who was Tiger

The man who was Tiger I ONCE wrote of Robert Maxwell that if British business was the House at Pooh Corner, he was the bouncy Tigger. None of the other animals could cope with...

CITY AND SUBURBAN High-pitched hoots from the top of the tree Telecom needs a wise owl CHRISTOPHER FILDES It is not for me to complain of lain Vallance's fondness for the...

Hospital reform Sir: James LeFanu's article on the hospital reforms ('The doctors' dilemma', 12 October) introduces a welcome note of reality into the NHS debate. The...

Noble Constantinople Sir: In his review of John Julius Norwich's Byzantium: The Apogee (Books, 26 October), Frederic Raphael seems to delight in flippant denigration of one of...

Cosy net book agreement Sir: Would anyone drive 20 miles to save 15 per cent at any pub or bookshop? Such dedication is reserved for far weightier purchases. What counts, with...

J. C. Mottram Sir: I would be grateful for any information your readers may be able to provide about J. C. Mottram 1880-1945, radiologist, flyfisher extraordinary and author of...

Queen's linen Sir: I couldn't but notice that the Queen, when giving the Queen's Speech, rhymed the word enhance with manse. If this is now the fashion, are such words, as:...

Two-faced Sir: I saw Anthony Blunt quite often between the spring of 1952 and the autumn Of 1954 while I was secretary of the National Art-Collections Fund which then had a...

Erring on caution's side Sir: Mr Waugh seems to me to exercise an admirable caution (Another voice, 26 October). By demanding that a Royal Commission be set up to investigate...

Bedroom scenes Sir: Following the decision of the House of Lords on 'marital rape', may I offer this suggestion? A video 'camcorder', supplied with tripod and remote control,...

L' Inconnu I looked in the mirror. I didn't recognise who looked at me. It was a man unshaven, dirtied and bloodied, frail and fatigued, Whose gaze at once was lowered as I...

NO FULL STOPS IN INDIA by Mark Tully

This Train Does Not Stop Here

This Train Does Not Stop Here Blink. There's a bin-yard with NO BALL GAMES. Three weasely lads cup their smokes like lookouts. One kicks a wall slowly, with deliberation. Blink...

A Nice Old World for T.H. Some of us drove to Arachova, to eat at Kyria Panagiotis' flame-lit cave: tables muffled with rugs, a long stone seat part of the wall: a comfy...

Thinking of Politics Land of my fathers, you escape me now And yet I will in no wise let you go: Let none imagine that I do not know How little sight of you the times allow....

THE AUGUST COUP by Mikhail Gorbachev

Hit me one more time

Pop music Hit me one more time Marcus Berkmann I n these uncertain times there's something curiously reassuring about Greatest Hits packages. After all, many of us now know...

Television Camera-shy in N16 Martyn Harris Stamford Hill is a mile down the road from where I live, and when visitors come from out of London we often point out the Orthodox...

Low life Warts and all Jeffrey Bernard A n antique and art dealer I have known for some years through mutual connections in the racing world has just commissioned someone to...

New life Sauce for the gander Zenga Longmore M y dear friend Hey Big Gita has been telling me how lucky she is, husband-wise. TWo years ago, a marriage was arranged for her....

SPECTATOR SPORT From little acorns... Frank Keating WE shall not know till next week whether ITV managed its targeted 12 million viewers in the United Kingdom for Saturday's...