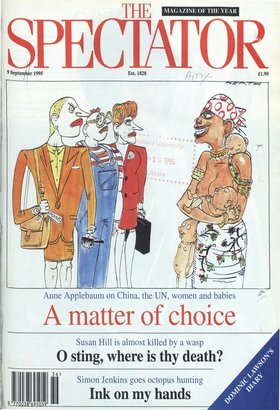 L E T T E R S The Amis letters Sir: Auberon Waugh writes (Another voice, 19 August) that inflated communications might be 'a grand idea if we had anything to communicate, but...

Clear? Sir: Paul Johnson's piece (And another thing, 26 August) is less than generous both to Billy Hughes and my father, John Davenport. John's affair with Mary McCarthy was...

Sir: I see from your book review pages (26 August) that Kingsley Amis is still baffled by the success of the book The Day of the Jackal, which, he says, 'showed at great length...

Vulgar existentialism Sir: As someone who has suffered from cancer and treatment for it, and been cured of the former and crippled by the latter, I feel sympathetic towards...

Studd-u-like Sir: Whilst I welcome the opportunity given to Mr John Studd (Letters, 26 August) to clarify that he has never had a car registra*tion of 'HRT 1', as the solicitor...

We were farsighted Sir: 1laving read your article 'The Lambeth of the North' (5 August), I wish to make it clear that Tameside Council does not deny that the company then known...

Misinformed Penguin Sir: Mr James Bates, a Penguin editor, who has, it seems, 'the task of ensuring that Salinger's books are republished here in strict accordance with the...

Surreal humour Sir: Emma Freud (Arts, 26 August) was interviewing Billie Holiday 'about theatre and Beckett'? This must be one of Ian Hislop's best jokes. I love it. Pamela...

After the Wall was over

After the Wall was over Michael Hulse A PATRIOT IN BERLIN by Piers Paul Read Weidenfeld, £5.99, pp. 309 The end of the Soviet Union created a vacuum for racketeers,...

Web Overnight, the spade I used Just yesterday has been crossstitched Against the fence. I drag it free and feel the whiplash hawsers Break as though the universe Had caught...

A plateful of blessings

The caliph and the discontented concubines

Portrait of a a lady and little else

Portrait of a a lady and little else Philip Glazebrook KISS & TELL by Alain de Botton Macmillan, £9.99, pp. 257 This engaging and delightful book is the history of a love...

Corruption and cynicism Anthony Sampson RULING BRITANNIA by Andrew Marr Michael Joseph, £16.99, pp. 320 kAndrew Marr of the Independent has written an important guide to the...

From a Sonnet History of Modern English Poetry The Wild Good Lookers The wild good-lookers - Thom in biker's leather Has crashed his Harley on the Freeway twice. Ted keeps on...

AR TS Opera Bring down the curtain Rupert Christiansen detects unhappiness behind the scenes at the ENO and fears for the company's future A Dennis Marks opens his third...

Dance All brawn and no brain Jann Parry Darren Disney, tanned pecs gleaming with sweat, shirt sleeves knotted suggestively around his waist, spins round on himself in a...

Cinema La Separation ('PG' selected cinemas) Love without the action Mark Steyn Billy Crystal has a film out this month called Forget Paris which is more or less what...

Television Power play Ian Hislop At a time when President Milosevic of Serbia is being presented as a peacemaker in the Yugoslav conflict, it was instructive to watch an...

Not motoring Don't go off the rails Gavin Stamp )Vhat do Nantes and Manchester have in common? The answer is that each city has reintroduced that most elegant and urbane form...

Low life Missing out on the side-effects Jeffrey Bernard I have been hankering after one of those stationary steam engines whose boiler is heated by a methylated-spirit...

Half life Red in the face Carole Morin A doctor is usually the last person you want to see when you're sick. Staying in bed with a good book is more soothing than queuing in...

Long life English my English Nigel Nicolson In my time I have learnt French, German and Italian, but none of them well enough to save me from mentally rehearsing a sentence...

SPECTATOR SPORT Thanks, Frank, for the HP Simon Barnes FRANK BRUNO'S great victory reminds me of the day Tewin Irregulars beat the British Council. Afterwards, a handful of...