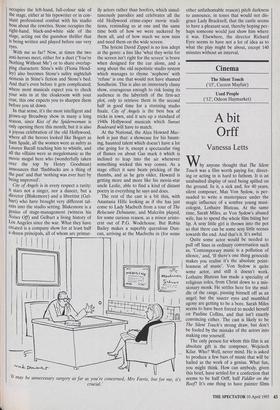 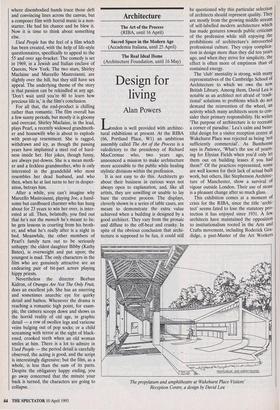 Why anyone thought that The Silent Touch was a film worth paying for, direct- ing or acting in is hard to fathom. It is an unabashed display of seed being spilled on the ground. In it, a sick and, for 40 years, silent composer, Max Von Sydow, is per- suaded to write a masterpiece under the magic influence of a sombre young musi- cologist, Lothaire Bluteau. At the same time, Sarah Miles, as Von Sydow's abused wife, has to spend the whole film biting her lip. A sexy little girl is thrown into the pot so that there can be some sexy little scenes towards the end. And that's it. It's awful.

Quite some actor would be needed to pull off lines in ordinary conversation such as, 'Contemporary music is a pollution of silence,' and, 'If there's one thing genocide makes you realise it's the absolute point- lessness of music'. Von Sydow is quite some actor, and still it doesn't work. Lothaire Bluteau has made a speciality of religious roles, from Christ down to a mis- sionary monk. He settles here for the mid- dle of the range, passing himself off as an angel; but the saucer eyes and mumbled agony are getting to be a bore. Sarah Miles seems to have been forced to model herself on Pauline Collins, and that isn't exactly convincing either. The cast is likely to be The Silent Touch's strong draw, but don't be fooled by the mistake of the actors into making one yourself.

The only person for whom this film is an absolute gift is the composer, Wojciech Kilar. Who? Well, never mind. He is asked to produce a few bars of music that will be hailed as the work of a genius. What fun, you might think. How can anybody, given this brief, have settled for a confection that seems to be half Orff, half Fiddler on the Roof? It's one thing to have painter films where disembodied hands trace those deft and convincing lines across the canvas, but a composer film with horrid music is a non- starter. He had his chance and he blew it. Now it is time to think about something else.

Used People has the feel of a film which has been created, with the help of life-style questionnaires, specifically to appeal to the 55 and over age-bracket. The comedy is set in 1969, in a Jewish and Italian enclave of Queens, New York. The two stars, Shirley Maclaine and Marcello Mastroianni, are slightly over the hill, but they still have sex appeal. The underlying theme of the story is that passion can be rekindled at any age. 'Don't wait until you're 80 to learn how precious life is,' is the film's conclusion.

For all that, the end-product is chilling rather than romantic. The film overall has a few sunny periods, but mostly it is gloomy and overcast. Shirley Maclaine, in the lead, plays Pearl, a recently widowed grandmoth- er and housewife who is about to explode with pent-up resentment. She is ragged, withdrawn and icy, as though the passing years have implanted a steel rod of hard- ness inside her. Her jokes, though funny, are always put-downs. She is a mean moth- er and a feckless grandmother, who is only interested in the grandchild who most resembles her dead husband, and who then, when he at last turns to her in desper- ation, betrays him.

After a while, you can't imagine why Marcello Mastroianni, playing Joe, a hand- some but cardboard charmer who has hung about for 23 years to win her over, is inter- ested at all. Then, belatedly, you find out that he's not the mensch he's Meant to be: he gets lessons in courting from his broth- er, and what he's really after is a night in bed. Meanwhile, the other members of Pearl's family turn out to be seriously unhappy: the eldest daughter Bibby (Kathy Bates), is overweight and put upon; the youngest is mad. The only characters in the film who are genuinely attractive are an endearing pair of bit-part actors playing hippy priests.

Nevertheless the director Beeban Kidron, of Oranges Are Not The Only Fruit, does an excellent job. She has an unerring and sometimes anarchic eye for quirky detail and bathos. Whenever the drama is reaching a romantic high point, for exam- ple, the camera scoops down and shows us the horrid reality of old age, in graphic detail — a row of swollen legs and varicose veins bulging out of pop socks; or a child screaming with terror at the sight of black- ened, crooked teeth when an old woman smiles at him. There is a lot to admire in Used People — the period detail is carefully observed, the acting is good, and the script is interestingly digressive; but the film, as a whole, is less than the sum of its parts. Despite the obligatory happy ending, you go away concerned that the minute your back is turned, the characters are going to collapse.