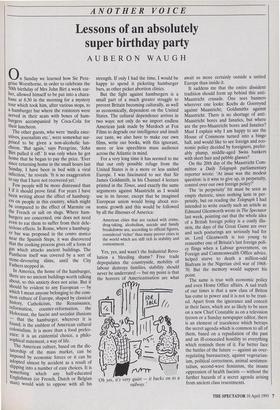 On Sunday we learned how Sir Pere- grine Worsthorne, in order to celebrate the 50th birthday of Mrs John Birt a week ear- lier, allowed himself to be put into a chara- banc at 8.30 in the morning for a mystery tour which took him, after various stops, to a hamburger bar where the roisterers were served in their seats with boxes of ham- burgers accompanied by Coca-Cola for their luncheon.

The other guests, who were 'media exec- utives, journalists etc.', were somewhat sur- prised to be given a non-alcoholic lun- cheon. 'But again,' says Peregrine, 'John Bin pulled it off.' It was only when he got home that he began to pay the price. 'Ever since returning home in the small hours last Sunday, I have been in bed with a viral Infection,' he reveals. 'It is no exaggeration to say that I have not recovered yet.' • Few people will be more distressed than I if it should prove fatal. For years I have been writing about the effect of hamburg- ers on people in this country, which might be compared to the effect of Marmite on the French or salt on slugs. Where ham- burgers are concerned, one does not need even to eat them to suffer from their dele- terious effects. In Rome, where a hamburg- er bar was proposed in the centro storico near the Spanish Steps, it was discovered that the cooking process gives off a form of gas which attacks ancient buildings. The Pantheon itself was covered by a sort of stone-devouring slime, until the City Fathers stepped in. In America, the home of the hamburger, there are no ancient buildings worth talking about, so this anxiety does not arise. But it should be evident to any European — by Which I mean anyone belonging to the com- mon culture of Europe, shaped by classical history, Catholicism, the Renaissance, reformation, counter-reformation, the Holocaust, the fascist and socialist illusions — that the hamburger, wherever it is found, is the emblem of American cultural Colonialism. It is more than a food prefer- ence: it is an existential choice, a philo- sophical statement, a way of life. The American culture, based on the dic- tatorship of the mass market, can be Imposed by economic forces or it can be adopted almost by accident as a result of Slipping into a number of easy choices. It is something which any half-educated Englishman (or French, Dutch or Belgian man) would wish to oppose with all his strength. If only I had the time, I would be happy to spend it picketing hamburger bars, as other picket abortion clinics.

But the fight against hamburgers is a small part of a much greater struggle to prevent Britain becoming culturally, as well as economically, dependent on the United States. The cultural dependence arrives in two ways: not only do we import endless American junk made by Murdoch at Fox Films to degrade our intelligence and insult our taste, we also have to make our own films, write our books, with this ignorant, more or less speechless mass audience across the Atlantic in mind.

For a very long time it has seemed to me that our only possible refuge from the United States is in a more or less united Europe. I was fascinated to see that Sir James Goldsmith, in his Channel 4 lecture printed in the Times, used exactly the same arguments against Maastricht as I would use in its favour, except that he imagined European union would bring about eco- nomic growth and this would be followed by all the illnesses of America:

American cities that are racked with crime, drug-taking, alcoholism, suicide and family breakdowns are, according to official figures, considered 'richer' than many poorer cities in the world which are still rich in stability and contentment.

Yes, yes, and wasn't the Industrial Revo- lution a bleeding shame? Free trade depopulates the countryside, mobility of labour destroys families, stability should never be underrated — but my point is that the horrors of Americanisation are what 'Oh yes, it's very quiet — it backs on to a railway.' await us more certainly outside a united Europe than inside it. It saddens me that the entire dissident tradition should form up behind this anti- Maastricht crusade. One sees banners wherever one looks: Kochs de Gooreynd against Maastricht; Goldsmiths against Maastricht. There is no shortage of anti- Maastricht bores and fanatics, but where are the pro-Maastricht bores and fanatics? Must I explain why I am happy to see the House of Commons turned into a bingo hall, and would like to see foreign and eco- nomic policy decided by foreigners, prefer- ably plump, middle-aged Swiss bankers with short hair and pebble glasses?

On the 20th day of the Maastricht Com- mittee a Daily Telegraph parliamentary reporter wrote: 'At issue was the modest question: is it wise to give up, in perpetuity, control over our own foreign policy?'

The 'in perpetuity' bit must be seen as empty rhetoric, since nothing lasts in per- petuity, but on reading the Telegraph I had intended to write exactly such an article as Edmund Glentworth wrote in The Spectator last week, pointing out that the whole idea of a British foreign policy is a costly illu- sion, the days of the Great Game are over and such posturings are seriously bad for us. Lord Glentworth is too young to remember one of Britain's last foreign poli- cy flings when a Labour government, on Foreign and Commonwealth Office advice, helped starve to death a million-odd Biafrans in the Nigerian civil war of 1968- 70. But the memory would support his point.

The same is true with economic policy and even Home Office affairs. A sad truth of our times is that a new class of Briton has come to power and it is not to be trust- ed. Apart from the ignorance and conceit in their faces, which are as likely to be seen on a new Chief Constable as on a television tycoon or a Sunday newspaper editor, there is an element of truculence which betrays the secret agenda which is common to all of them, based on a repudiation of the past and an ill-concealed hostility to everything which reminds them of it. Far better face the battles of the future — against an over- regulating bureaucracy, against vegetarian- ism, political correctness, animal sentimen- talism, second-wave feminism, the insane oppression of health fascists — without the further hazards of a secret agenda arising from ancient class resentments.