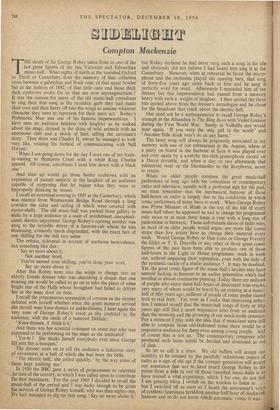 THE death of Sir George Robey takes from us one of the last great figures of the late Victorian and Edwardian music-hall. What nights of mirth at the vanished Oxford or Tivoli or Canterbury does the memory of that collarless cross between a gaberdine and frock coat, of that squat bowler hat in the fashion of 1892, of that little cane and those thick dark eyebrows evoke for us that are now septuagenarians 1 It was the custom for many of the old music-hall comedians to sing their first song in the eccentric garb they had made their own and then hurry off into the wings to assume whatever character they were to represent for their main act. Robey's Prehistoric Man was one of his famous impersonations. I have seen an audience helpless with laughter as he walked about the stage. dressed in the skins of wild animals with an enormous club and a shock of hair, telling the caveman's story. Then there was Charles II, whom he managed to look very like, relating his method of communicating with Nell Gwynn: 'When I am going down for the day 1 send one of my lords- in-waiting to Hampton Court with a white King Charles spaniel. Of course, sometimes I send him down with a black one.'

And then up would go those bushy eyebrows with an expression of pained surprise at the laughter of an audience capable of supposing that he meant what they were so improperly thinking he meant.

I recall an autumnal evening in 1905 at the Canterbury. which was entered from Westminster Bridge Road through a long corridor the sides and ceiling of which were covered with oyster-shells. The old music-hall was packed from gallery to stalls by a huge audience in a state of uninhibited, unsophisti- cated, electric enjoyment. George Robey's opening number was sung to the invisible driver of a hansom-cab whom he was dismissing, evidently much disgruntled, with the exact fare of one shilling for the full two miles.

After this Robey went into the wings to change into an elderly female dresser who was cherishing a dream that one evening she would be called to go on to take the place of some bright star of the Halls whose brougham had failed to deliver her at the stage door on time.

I recall the preposterous expression of coyness as the dresser debated with herself whether when the great moment arrived she should wear knee-dresses or ankle-dresses, I hear again the very tone of George Robey's voice as she confided to the audience, with the smile of a battered Delilah: 'Knee-dresses, I think-k-k.'

And there was her scornful comment on some star who was supposed to be performing on the stage as she meditated : ' Yer-ss 1 She thinks herself everybody ever since George III sent her a bouquet.' The dresser went on to tell the audience a ludicrous story pf adventures at a ball of which she had been the belle. ' The electric bell.' she added quickly, 'by the way some of them kept pushing me.'

In 1950 the BBC gave a series of programmes to celebrate lie turn of the century, to which I was called upon to contribute the first instalment. For the year 1905 I decided to recall the music-hall of the period and I was lucky enough to be given the services of George Robey himself, who was then eighty-one. We had managed to dig up that song, 'Say no more about it,' but Robey declitred he had never sung such a song in his life and obviously did not believe I had heard him sing it at the Canterbury. However, when at rehearsal he faced the micro- phone and the orchestra played the opening bars, that song of forty-five years ago came back to him and he sang it perfectly word for word. Afterwards I reminded him of the dresser but this impersonation had passed from a memory heavy with such a weight of laughter. I then quoted the three bits quoted above from the dresser's monologue and he chose for the broadcast that crack about the electric bell.

One need not be a septuagenarian to recall George Robey's triumph at the Alhambra in The Bing Boys with Violet Loraine during the First World War. Surely in Valhalla one would hear again, 'If you were the only girl in the world' and 'Another little drink won't do us any harm.'

The latter song will always be poignantly associated in my memory with one of our submarines in the Aegean, where at a party on board in the harbour at Syra it was played over and over again by a scratchy ten-inch gramophone record on a Decca portable, and when a day or two afterwards that submarine went up the Dardanelles to the Bosphorus, never to return.

When we older 'people compare the great music-hall performers of long ago with the comedians of contemporary radio and television, usually with a profound sigh for the past, we must remember that the mechanical humour of those half-hours on radio is largely due to the conditions in which comic performers of today have to work. When George Robey was Prime Minister of Mirth at the top of the bill of every music-hall where he appeared he had to change his programme only twice or at most three times a year with a long run of pantomime in between. Those unfortunate slaves of radio who. as most of us older people would argue, are more like comic strips than live artists have to change their material every week. Would George Robey or Dan Leno or George Formby the Elder or T. E. Dunville or any other of those great comic figures of the past have been able to produce one of those half-hours in the Light or Home programme, week in week out, without impairing their reputation, even with the help of the synthetic cackle of a studio audience ? It may be doubted. Yet, the great comic figure of the music-hall's heyday may have seemed lacking in humour to an earlier generation which had revelled in almost continuous punning. Today there are millions of people who enjoy these hall-hours of desiccated wise-cracks, very many of whom would be bored by an evening at a music- hall of fifty years ago; millions of people of today prefer tinned fruit to real fruit. Yet, even as I make that depressing reflec- tion I remind myself that the music-hall songs of forty or fifty years ago still find a more responsive echo from an audience than the moaning and the groaning of our mock-turtle crooners.

For a moment I play with the idea that if musicians were still able to compose those old-fashioned tunes there would be a responsive audience for them even among young people. And of course that is not so. 'The contemporary composer who produced such tunes would be derided and dismissed as out of date.

So let us call it a draw. We old buffers will accept our inability to be amused by the painfully industrious comics of radio as a sign of old age if the younger generation will accept our assurance that not to have heard George Robey in his prime from a seat in one of those vanished music-halls is to have missed a vital experience, which I for one, do not feel I am gaining when I switch on the wireless to listen to . . • but I switched off as soon as I heard the announcer's voice of synthetic heartiness heralding another half-hour of clockwork humour and so do not know which automatic comic it was.'..,