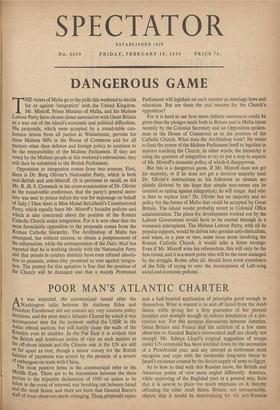 THE voters of Malta go to the polls this weekend to decide for or against 'integration' with the United Kingdom. Mr. Mintoff, Prime Minister of Malta, and his Maltese Labour Party have chosen closer association with Great Britain as a way out of the island's economic and political difficulties. His proposals, which were accepted by a round-table con- ference drawn from all parties at Westminster, provide for three Maltese MPs in the House of Commons and for all matters other than defence and foreign policy to continue to be the responsibility of the Maltese Parliament. If they are voted by the Maltese people at this weekend's referendum, they will then be submitted to the British Parliament.

Opposition to integration comes from two sources. First, there is Dr. Borg Olivier's Nationalist Party, which is both anti-British and anti-Mintoff. (It is pertinent to recall, as did Mr. R. H. S. Crossmah in his cross-examination of Dr. Olivier at the round-table conference, that the party's general secre- tary was sent to prison before the war for espionage on behalf of Italy.) Then there is Miss Mabel Strickland's Constitutional Party, which equally fears Mr. Mintoff's Socialist policies and Which is also concerned about the position of the Roman Catholic Church under integration. For it is now clear that the most formidable opposition to the proposals comes from the Roman Catholic hierarchy. The Archbishop of Malta has attempted, but without success, to obtain a postponement of the referendum, while the correspondent of the Daily Mail has reported that he is working closely with the Nationalist Party and that priests in country districts have even refused absolu- tion to peasants, unless they promised to vote against integra- tion. The pretext for this agitation is fear that the position of the Church will be damaged and that a mainly Protestant Parliament will legislate on such matters as marriage laws and education. But are these the real reasons for the Church's opposition?

For it is hard to see how more definite assurances could be given than the pledges made both in Britain and in Malta (most recently by the Colonial Secretary and an Opposition spokes- man in the House of Commons) as to the position of the Catholic Church. What does the Archbishop want? He wants to limit the power of the Maltese Parliament itself to legislate in matters touching the Church. In other words, the hierarchy is using the question of integration to try to put a stop to aspects of Mr. Mintoff's domestic policy of which it disapproves.

But this is a dangerous game. If Mr. Mintoff does not get his majority, or if he does not get a decisive majority (and Dr. Olivier's instructions to his followers to abstain are plainly dictated by the hope that simple non-voters can be counted as opting against integration), he will resign. And who is then to replace him? Dr. Olivier has no majority and no policy for the future of Malta that could be accepted by Great Britaih. The island would probably revert to Colonial Office administration. The plans for development worked out by the Labour Government would have to be carried through in a worsened atmosphere. The Maltese Labour Party, with all its popular support, would be driven into genuine anti-clericalism, and when, in a year or two, some issue arose involving the Roman Catholic Church, it would take a bitter revenge. Even if Mr. Mintoff wins his referendum, this will only be the first round, and it is a moot point who will be the most damaged by the struggle. Rome, after all, should have some experience of the folly of trying to veto the development of Left-wing social and economic policies.