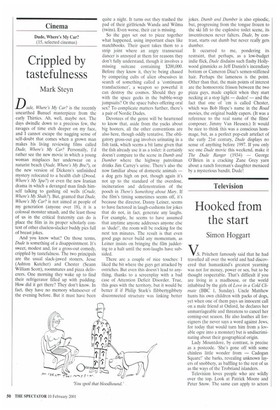 Dude, Where's My Car? is the recently unearthed Bunuel masterpiece from the early Thirties. Ah, well, maybe not. The days dwindle down to a precious few, the ravages of time etch deeper on my face, and I cannot escape the nagging sense of self-doubt that comes when a grown man makes his living reviewing films called Dude, Where's My Car? Personally, I'd rather see the new movie in which a young woman misplaces her underwear on a naturist beach (Nude, Where's My Bra?), or the new version of Dickens's unfinished mystery relocated to a health club (Drood, Where's My Spa?) or even the new Iranian drama in which a deranged man finds himself talking to gushing oil wells (Crude, Where's My Shah?). But, granted that Dude, Where's My Car? is not aimed at people of my generation (anyone over 18), it is a colossal monster smash, and the least those of us in the critical fraternity can do is place the film in its proper scholarly context of other clueless-slacker buddy pies full of breast jokes.

And you know what? On those terms, Dude is something of a disappointment. It's sweet, modest and, for a gross-out comedy, crippled by tastefulness. The two principals are the usual slack-jawed stoners, Jesse (Ashton Kutcher) and Chester (Seann William Scott), roommates and pizza deliverers. One morning they wake up to find their refrigerator filled up with pudding. How did it get there? They don't know. In fact, they have no memory whatsoever of the evening before. But it must have been quite a night. It turns out they trashed the pad of their girlfriends Wanda and Wilma (twins). Even worse, their car is missing.

So the guys set out to piece together what happened, using important clues like matchbooks. Their quest takes them to a strip joint where an angry transsexual dancer is annoyed at them for reasons they don't fully understand, though it involves a missing suitcase containing $200,000. Before they know it, they're being chased by competing cults of alien obsessives in search of something called a 'continuum transfuctioner', a weapon so powerful it can destroy the cosmos. Should they go with the space geeks in the bubble-wrap jumpsuits? Or the space babes offering oral sex? To complicate matters further, there's a pair of Nordic Dudes.

Devotees of the genre will be heartened to know that, aside from the yucks about big hooters, all the other conventions are also here, though oddly tentative. The obligatory gross-out gag involves urinating in a fish tank, which seems a bit lame given that the fish already use it as a toilet: it certainly doesn't compare to the scene in Dumb and Dumber where the highway patrolman drinks Jim Carrey's urine. There's also the now familiar abuse of domestic animals — a dog gets high on pot, though again it's not up to the standard of the overdose, incineration and defenestration of the pooch in There's Something about Mary. If the film's timing sometimes seems off, it's because the director, Danny Leiner, seems to have factored in laugh-cushions for jokes that do not, in fact, generate any laughs. For example, he seems to have assumed that anytime anyone addresses anyone else as 'dude, the room will be rocking for the next ten minutes. The result is that even good gags never build any momentum. as Leiner insists on bringing the film juddering to a halt until the non-laughs have subsided.

There are a couple of nice touches: I liked the bit where the guys get attacked by ostriches. But even this doesn't lead to anything, thanks to a screenplay with a bad case of Attention Deficit Disorder. True, this goes with the territory, but it would be better if if Philip Stark's flibbertygibbety disconnected structure was linking better jokes. Dumb and Dumber is also episodic, but, progressing from the tongue frozen to the ski lift to the explosive toilet scene, its inventiveness never falters. Dude, by contrast, starts out dumb but never really gets dumber.

It occurred to me, pondering its restraint, that perhaps, as a low-budget indie flick, Dude disdains such flashy Hollywood gimmicks as Jeff Daniels's incendiary bottom or Cameron Diaz's semen-stiffened hair. Perhaps the lameness is the point. Other than that, the main points of interest are the homoerotic frisson between the two pizza guys, made explicit when they start necking at a stop light — dudes! — and the fact that one of 'ern is called Chester, which was Bob Hope's name in the Road movies, the original buddy capers. (It was a reference to the real name of the films' composer, Jimmy Van Heusen.) It would be nice to think this was a conscious hornmage, but, as a perfect pop-cult artefact of the early 21st century, Dude displays no sense of anything before 1997. If you only see one Dude movie this weekend, make it The Dude Ranger (1934) — George O'Brien in a cracking Zane Grey yarn about a ranch foreman's daughter menaced by a mysterious bandit. Dude!