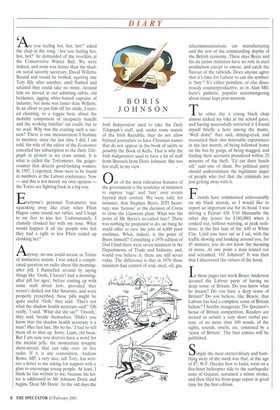 Are you feeling hot, hot, hot?' asked the chap in the song. 'Are you feeling hot, hot, hot?' he demanded of the revellers at the Conservative Winter Ball. We were indeed, and none was hotter than the shadow social security secretary, David Willetts. Round and round he twirled, squiring one Tory filly after another, until flushed and satiated they could take no more. Around him we moved in our admiring orbits, old beldames, jigging white-haired captains of industry, but none was faster than Willetts. In an effort to put him off his stride, I started chanting, to a reggae beat, about the mobility component of incapacity benefit and the working families' tax credit, but to no avail. Why was the evening such a success? There is one measurement I hesitate to mention, since the last time I did, I am told, the wife of the editor of the Economist cancelled her subscription to the Daily Telegraph in protest at my crass sexism. It is what is called the Tottometer, the geigercounter that detects good-looking women. In 1997, I reported, these were to be found in numbers at the Labour conference. Now — and this is not merely my own opinion — the Tories are fighting back in a big way.

Everyone's personal Tottometer was squeaking away like crazy when Ffion Hague came round our tables, and I leapt to my feet to kiss her. Unfortunately, I clumsily clonked her with my nose. What would happen if all the people who felt they had a right to kiss Ffion ended up clonking her?

Anyway, no one could accuse us Tories of instinctive sexism. I was asked a complicated question on radio about the morningafter pill. I flannelled around by saying things like 'Gosh, I haven't had a morningafter pill for ages', before coming up with some stuff about how, provided they weren't dished out like Smarties, and were properly prescribed, these pills might be quite useful. 'Ooh,' they said. 'That's not what the shadow health secretary said! Oh really,' I said. 'What did she say?' 0000h,' they said, beside themselves. 'Didn't you know that the shadow health secretary is a man? Hee hee hee. Ho ho ho.' I had to tell them all to shut up. Sorry, Liam, old bean. But I am sure you doctors have a word for the mental jelly, the momentary synaptic short-circuit, that can take over on live radio. If it is any consolation, Andrew Rowe, MP, a very nice, tall Tory, has written a letter to me asking for support with a plan to encourage young people. At least, I think he has written to me, because his letter is addressed to Mr Johnson Doris and begins 'Dear Mr Doris'. In the old days the

Irish Independent used to take the Daily Telegraph's stuff, and, under some statute of the Irish Republic, they do not allow bylined journalists to have Christian names that do not appear in the book of saints or possibly the Book of Kells. That is why the Irish Independent used to have a lot of stuff from Brussels from Doris Johnson. She was hot stuff, in my view. .

0 ne of the most ridiculous features of the government is the tendency of ministers to express 'rage' and 'fury' over events beyond their control. We were told, for instance, that Stephen Byers, DTI Secretary, was 'furious' at the decision of Corus to close the Llanwern plant. What was the point of Mr Byers's so-called fury? There was nothing he proposed to do, no bung he could offer to save the jobs of 6,000 poor steelmen. What, indeed, is the point of Byers himself? Consulting a 1976 edition of Dod I find there were seven ministers in the Departments of Trade and Industry, and, would you believe it, there are still seven today. The difference is that in 1976 those ministers had control of coal, steel, oil, gas,

telecommunications, car manufacturing and the rest of the commanding depths of the British economy. These days Byers and his six junior ministers have no role in steel production except to emote, and catch the flavour of the tabloids. Does anyone agree that it's time for Labour to can the synthetic 'fury'? It's either pointless, or else disastrously counterproductive, as in Alan Milburn's pathetic, populist scaremongering about tissue kept post-mortem.

The other day a young black chap almost nicked my bike at the school gates, and having successfully retrieved it I found myself briefly a hero among the mums. 'Well done!' they said, shining-eyed, and recounted their own miserable experiences in the last month, of being followed home on the bus by gangs, of being mugged, and finding their accounts plundered within 25 minutes of the theft. 'I'd cut their hands off,' said one of them. No political party should underestimate the legitimate anger of people who feel that the criminals are just getting away with it.

Friends have commented unfavourably on my black anorak, so I would like to report an important use for its hood. I was driving a Ferrari 456 V10 Maranello the other day (yours for £180,000) when it conked out, without warning, at peak rushhour, in the fast lane of the A40 at White City. Until you have sat as I sat, with the traffic slewing and honking around you, for 45 minutes, you do not know the meaning of stress. At one point a man leaned out and screamed, ‘Oi! Johnson!' It was then that I discovered the virtues of the hood.

In these pages last week Bruce Anderson accused the Labour party of having no deep sense of Britain. Do you know what he means? Do you have a deep sense of Britain? Do you believe. like Brucie, that Labour has had a complete sense of Britain failure? I hereby inaugurate The Spectator's Sense of Britain competition. Readers are invited to submit a very short verbal picture, of no more than 300 words, of the sights, sounds, smells, etc. connoted by a 'sense of Britain'. The best entries will be published.

Simply the most extraordinary and humbling story of the week was that, at the age of 87, W.F. Deedes flew to India, went on a five-hour helicopter ride to the earthquake zone of Gujarat, sustained a minor stroke, and then filed his front-page report in good time for the first edition.