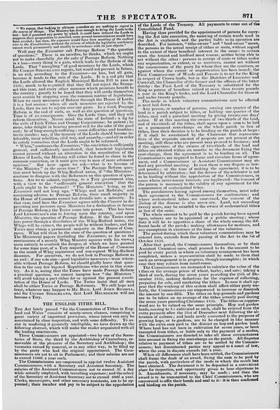 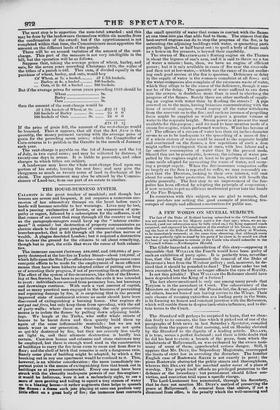 THE Act lately passed "for the Commutation of Tithes in Eng- land and Wales consists of ninety-seven clauses, comprising a great variety of important provisions' whose intent can only be ascertained by close inspection, and with some difficulty. To as- sist in rendering it generally intelligible, we bare drawn up the following abstract, which will make the reader acquainted withal! the leading enactments. Three Commissioners are appointed—two by one of the Secre- taries of State, the third by the Archbishop of Canterbury, re- moveable at the pleasure of the Secretary and Archbishop ; the vacancies caused by removal, or in any other way, to be filled up by the party who had the original appointment. The Coin- missioners are not to sit in Parliament; and their salaries are not to exceed BOW. a year each. The Commissioners are empowered to appoint twelve Assistant Commissioners, with a Secretary and Assistant Secretary. The salaries of the Assistant Commissioners not to exceed 3/. a day while actually employed, with travelling expenses • and the salary of the Secretary or Assistant Secretary not to exceed 800/. a year. Clerks, messengers, and other necessary assistants, are to be ap- pointed; their number and pay to be subject to the approbation of the Lords of the Treasury. All payments to come out of the Consolidated Fund.

Having thus provided for the appointment of persons for carry- ing the Act into execution, the meaning of certain words used in the Act is explained, and the parties liable to its operation are described. For instance, " tithe-owner " and " land-owner " mean, the persons in the actual receipt of tithes or rents, without regard to the extent of their beneficial interest in the same: in certain cases the tenant and landlord must concur, neither being able to act without the other : persons in receipt of rents or tithes under any sequestration, or extent, or as receivers, cannot act without the concurrence of the party for whom they are the receivers, or against whom the extent or sequestration has been issued : the First Commissioner of Woods and Forests is to act for the King in respect of Crown lands, but in the Dutchies of Lancaster and Cornwall, the Chancellor of the former and the officers of the latter dutchy : the _First Lord of the Treasury is substituted for the King as patron of benefices valued at more than twenty pounds a year in the King's books, and the Lord Chancellor, for those at and under twenty pounds.

The mode in which voluntary commutations may be effected is next laid down.

Any person, or number of persons, owning one quarter of the land in a parish subject to tithes, or holding one,quarter of the tithes, may call a parochial meeting by giving twenty-one days' notice. If at this meeting the owners of two-thirds of the land, and of two-thirds of the tithes, shall agree upon a sum to be laid as a permanent rent-charge on the whole parish in lieu of tithes, then their decision is to be binding on the parish at large : if it shall be ascertained by the Chairman that representa- tives of the requisite amount of property are not present at the meeting, still those who are present may proceed to business; and if the sigmqures of the owners of two-thirds of the land and tithes are obtained within six months to the document fixing the rent-charge, then the agreement is to he binding on all. The Commissioners are required to frame and circulate forms of agree- ment, and a Commissioner or Assistant Commissioner may at- tend any parochial meeting. In case there is any dispute or law- suit pending at the time of making the agreement, it is to be determined by arbitration ; but the decree of the arbitrator is not to be binding without the approbation of the Commissioners, in cases where reversionary interests are implicated: the Consent of the patron is necessary to the validity of any agreement for the commutation of ecclesiastical tithes.

The parishioners having agreed among themselves, must refer their agreement to the Commissioners for confirmation; and where ecclesiastical tithes are concerned, the consent of the Ilishop of the diocese is also neeesqtry. Land, not exceeding twenty acres, may be awarded to the owner of ecclesiastical tithes in lieu of the same.

The whole amount to be paid by the parish having been agreed upon, valuers are to be appointed at a public meeting ; whose duty it will be to apportion a share of the whole among the dif- ferent lands of the parish ; making allowances for moduses, and any exemptions in existence at the time of the valuation.

The period during which these voluntary commutations may be entered into, extends from the passing of the Act to the 1st of October 1838.

After that period, the Commissioners themselves, or by their Assistant Commissi )ners, shall proceed to fix the amount to be paid by every parish in which no voluntary arrangement has been completed, unless a representation shall be made to them that such an arrangement is in progress, though incomplete; in which case they may refrain from interference.

The Commissioners are instructed to calculate the value of the t times on the average prices of wheat, barley, and oats; taking a third of each, during the seven years preceding the 25th of De- cember 1835, making deductions for the expense of collecting, preparing for sale, and marketing the tithes. In case it shall ap- pear that the working of this system shall affect either party un- fairly, the Commissioners are empowered to increase or diminish the amount by one-fifth. The tithes on hop-grounds and gardens are to be taken on an average of the tithes actually paid during the seven years preceding Christmas 1835. The tithes on coppice- wood are to be valued on the same principle. Hop and garden lands, ceasing to be cultivated as such, shall be relieved from the extra payment after the 31st of December next following the al- teration of culture; and lands newly converted to the purposes of growing hops, or to gardens. are to be charged in like manner with the extra sum paid in the district on hop and garden land. Where land has not been in cultivation for seven years, or been exempted from tithes, or liable only to the payment of a modus, the Commissioners are directed to take all these circumstances into account in fixing the rent-charge on the parish. All disputes relative to payment of tithes are to be settled by the Commis- sioners; but discontented parties may appeal to a court of law, where the sum in dispute exceeds 204 a year. When all differences shall have been settled, the Commissioners shall frame the draft of an award, fixing the sum to be paid by the parish, with particulars of the mode in which the result has been obtained. The document is to be deposited in a convenient place for inspection, and opportunity given to hear objections to it. Amendments, if necessary, may be made ; and then the award is to be transmitted to the Chief Commissioners, who are empowered to affix their hands and seal to it: it is then confirmed and binding on the parish.

The next step is to apportion the sum-total awarded : and this may be done by the landowners themselves within six months from the confirmation of the award ; but if the apportionment is not completed within that time, the Commissioners must apportion the amount on the different lands of the parish.

There will be an annual variation of the amount of the rent- charge. This part of the measure is not very intelligible in the bill, but the operation will be as follows. Suppose that, taking the average prices of wheat, barley, and oats, for the seven years preceding Christmas 1835, the value of the tithes of a parish is 601. This sum, if divided equally in the purchase of wheat, barley, and oats, would buy

But if the average prices for seven years preceding 1839 should be Wheat 8s.

then the amount of the rent-charge would be 57 1-7th bushels of Wheat, at 8s. £22 17 11 100 bushels of Barley Ss. 23 0 0 160 bushels of Oats 3.9. 24 0 0 £71 17 11 If the price of grain fell, the amount of the rent-charge would be lessened. Thus it appears, that all that the Act fires is the quantity, the money payment varying with the average price of grain for the preceding seven years; which the Comptroller of Corn-returns is to publish in the Gazette in the month of January each year. The rent-charge is payable on the 1st of January and the 1st of July, in two equal sums; and may be collected by distress, if twenty-one days in arrear. It is liable to poor-rates, and other charges to which tithes are subject. A landowner may have the whole rent-charge fixed upon one portion of his estate, leaving the rest free; and may give the clergyman as much as twenty acres of land in discharge of his claim. The apportionment may also be altered by the Commis- sioners of Land-tax, from one part of an estate to another.