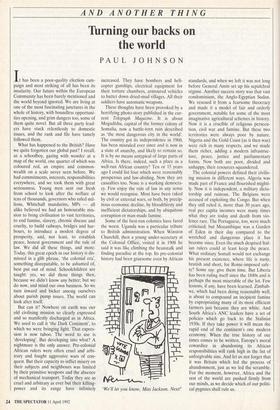 Turning our backs on the world

It has been a poor-quality election cam- paign and most striking of all has been its insularity. Our future within the European Community has been barely mentioned and the world beyond ignored. We are living at one of the most fascinating junctures in the whole of history, with boundless opportuni- ties opening, and grim dangers too, some of them quite novel. But all three party lead- ers have stuck relentlessly to domestic issues, and the rank and file have tamely followed them.

What has happened to the British? Have we quite forgotten our global past? I recall, as a schoolboy, gazing with wonder at a map of the world, one quarter of which was coloured red, an empire and common- wealth on a scale never seen before. We had commitments, interests, responsibilities everywhere, and we took them with great seriousness. Young men sent out fresh from school to look after the welfare of tens of thousands, governors who ruled mil- lions, Whitehall mandarins, MPs — all alike believed we had an honourable mis- sion to bring civilisation to vast territories, to end famine, slavery, chronic disease and cruelty, to build railways, bridges and har- bours, to introduce a modest degree of prosperity, and, not least, to establish peace, honest government and the rule of law. We did all these things, and more. Today, this great epoch in our history is dis- missed in a glib phrase, 'the colonial era', something disreputable, to be ashamed of, best put out of mind. Schoolchildren are taught: yes, we did those things then, because we didn't know any better; but we do now, and mind our own business. So we turn inward and bicker among ourselves about parish pump issues. The world can look after itself.

But can it? Nowhere on earth was our old civilising mission so clearly expressed and so manifestly discharged as in Africa. We used to call it 'the Dark Continent', to which we were bringing light. That expres- sion is now taboo. The word to use is 'developing'. But developing into what? A nightmare is the only answer. Pre-colonial African rulers were often cruel and arbi- trary and fought aggressive wars of con- quest. But their capacity to inflict misery on their subjects and neighbours was limited by their primitive weapons and the absence of mechanical transport. Today they are as cruel and arbitrary as ever but their killing- power and its range have infinitely increased. They have bombers and heli- copter gunships, electrical equipment for their torture chambers, armoured vehicles to batter down dried-mud villages. All their soldiers have automatic weapons.

These thoughts have been provoked by a horrifying photo-story published in the cur- rent Telegraph Magazine. It is about Mogadishu, capital of the former colony of Somalia, now a battle-torn ruin described as 'the most dangerous city in the world'. The country got its independence in 1960, has been misruled ever since and is now in a state of anarchy, and likely to remain so. It is by no means untypical of large parts of Africa. Is there, indeed, such a place as a well-run African country? Ten or 15 years ago I could list four which were reasonably prosperous and law-abiding. Now they are casualties too. None is a working democra- cy. Few enjoy the rule of law in any sense we would recognise. Most have been raked by civil or external wars, or both, by precip- itous economic decline, by bloodthirsty and inefficient dictatorships, and by ubiquitous corruption or man-made famine.

Some of the best-run colonies have fared the worst. Uganda was a particular tribute to British administration. When Winston Churchill, then a young under-secretary at the Colonial Office, visited it in 1908 he said it was like climbing the beanstalk and finding paradise at the top. Its pre-colonial history had been gruesome even by African 'We'll let you know, Miss Jackson. Next!' standards, and when we left it was not long before General Amin set up his sepulchral regime. Another success story was that vast condominium, the Anglo-Egyptian Sudan. We rescued it from a fearsome theocracy and made it a model of fair and orderly government, notable for some of the most imaginative agricultural schemes in history. Now it is a crucible of religious persecu- tion, civil war and famine. But these two territories were always poor by nature. Nigeria and the Gold Coast (as it then was) were rich in many respects, and we made them richer, adding a modern infrastruc- ture, peace, justice and parliamentary forms. Now both are poor, divided and unhappy, their resources squandered.

The colonial powers defined their civilis- ing mission in different ways. Algeria was made part of France and flourished mighti- ly. Now it is independent, a military dicta- torship and ruinous. The Belgians were accused of exploiting the Congo. But when they still ruled it, more than 30 years ago, real per capita incomes were many times what they are today and death from vio- lence rare. The Portuguese, too, were much criticised; but Mozambique was a Garden of Eden in their day compared to the wretched and dangerous place it has become since. Even the much despised Ital- ian rulers could at least keep the peace. What ordinary Somali would not exchange his present existence, where life is nasty, brutish and short, for Rome-imposed safe- ty? Some say: give them time. But Liberia has been ruling itself since the 1840s and is perhaps the most miserable of the lot. Few lessons, if any, have been learned. Zimbab- we, which had been doing reasonably well, is about to compound an incipient famine by expropriating many of its most efficient farmers just because they are white. And

South Africa's ANC leaders have a set of policies which go back to the Stalinist 1930s. If they take power it will mean the rapid end of the continent's one modern economy. When the true history of our times comes to be written, Europe's moral cowardice in abandoning its African responsibilities will rank high in the list of unforgivable sins. And let us not forget that it was Britain which led the process of abandonment, just as we led the scramble.

For the moment, however, Africa and the rest of the world are pushed firmly from our minds, as we decide which of our politi- cal pygmies shall rule us.