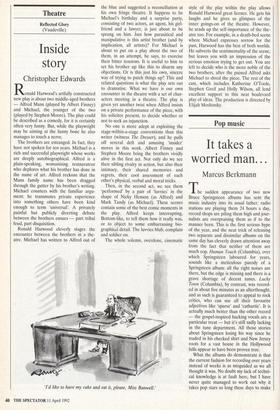 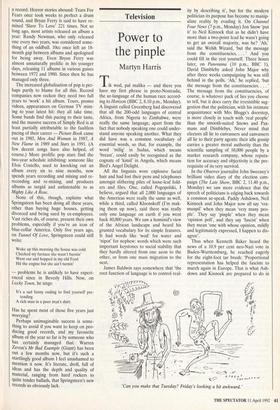 It takes a worried man...

The sudden appearance of two new Bruce Springsteen albums has sent the music industry into its usual lather: radio stations are playing them 24 hours a day, record shops are piling them high and jour- nalists are overpraising them as if to the manner born. This is the first serious hype of the year, and the neat trick of releasing two separate and dissimilar albums on the same day has cleverly drawn attention away from the fact that neither of them are much cop. Human Touch (Columbia), over which Springsteen laboured for years, sounds like a meticulous parody of a Springsteen album: all the right noises are there, but the edge is missing and there is a grave shortage of decent tunes. Lucky Town (Columbia), by contrast, was record- ed in about five minutes as an afterthought, and as such is guaranteed to appeal to rock critics, who can use all their favourite adjectives like 'sparse' and 'cathartic'. It is actually much better than the other record — the gospel-inspired backing vocals are a particular treat — but it's still sadly lacking in the tune department. All those stories about Springsteen losing his way since he traded in his checked shirt and New Jersey roots for a vast house in the Hollywood hills appear to have been proven true.

What the albums do demonstrate is that the current fashion for recording over years instead of weeks is as misguided as we all thought it was. No doubt my lack of techni- cal knowledge is at fault here, but I have never quite managed to work out why it takes pop stars so long these days to make a record. Horror stories abound: Tears For Fears once took weeks to ,perfect a drum sound, and Bryan Ferry is said to have re- mixed 'Slave To Love' 221 times. Not so long ago, most artists released an album a year: Randy Newman, who only released one every two years, was considered some- thing of an oddball. lOcc once left an 18- month gap between albums and apologised for being away. Even Bryan Ferry was almost unnaturally prolific in his younger days, releasing 11 albums in various guises between 1972 and 1980. Since then he has managed only three.

The increased globalisation of pop is per- haps partly to blame for all this. Record companies now reckon they need two full years to 'work' a hit album. Tours, promo videos, appearances on German TV mim- ing to your latest hit: they all take time. Some bands find this pacing to their taste, and the massive success of Simply Red is at least partially attributable to the faultless pacing of their career — Picture Book came out in 1985, Men And Women in 1987, A New Flame in 1989 and Stars in 1991. (A few decent songs have also helped, of course.) More prolific pop stars find the two-year schedule inhibiting: someone like Elvis Costello, used to knocking out an album every six to nine months, now spends years recording and mixing and re- recording and re-mixing, and produces albums as turgid and unlistenable to as Mighty Like A Rose.

None of this, though, explains what Springsteen has been doing all these years, other than buying huge houses, getting divorced and being sued by ex-employees. Vast riches do, of course, present their own problems, especially if you're an icon of blue-collar America. Only five years ago, on Tunnel Of Love, Springsteen could still write:

— problems he is unlikely to have experi- enced since in Beverly Hills. Now, on Lucky Town, he sings:

It's a sad funny ending to find yourself pre- tending A rich man in a poor man's shirt.

Has he spent most of those five years just worrying?

Perhaps unimaginable success is some- thing to avoid if you want to keep on pro- ducing good records, and my favourite album of the year so far is by someone who has certainly managed that. Warren Zevon's Mr Bad Example (Giant) has been out a few months now, but it's such a startlingly good album I feel unashamed to mention it now. It's literate, droll, full of Ideas and has the depth and quality of material, ranging from hard rockers to quite tender ballads, that Springsteen's new records so obviously lack.