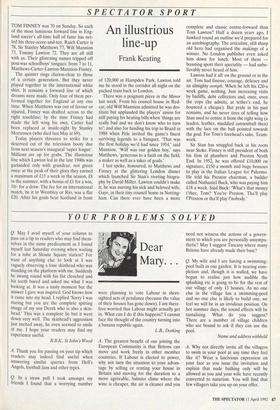 TOM FINNEY was 70 on Sunday. So each of the most luminous forward line in Eng- land soccer's all-time hall of fame has net- ted his three-score-and-ten. Raich Carter is 78, Sir Stanley Matthews 77, Wilf Mannion 73, Tommy Lawton 72. They are all still with us. Their glistening names tripped off post-war schoolboys' tongues: from 7 to 11, Matthews-Carter-Lawton-Mannion-Finney.

The quintet rings clarion-clear to those of a certain generation. But they never played together in the international white shirt. It remains a forward line of which dreams were made. Only four of them per- formed together for England at any one time. When Matthews was out of favour or injured, Finney was drafted across to the right touchline; by the time Finney had made the left wing his own, Carter had been replaced at inside-right by Stanley Mortensen (who died last May at 69).

Today players threaten to strike for a deserved cut of the television booty due from next season's inaugural 'super league'. Millions are up for grabs. The illustrious line which Lawton led in the late 1940s was garlanded only with grandeur, not green ones: at the peak of their glory they earned a maximum of £15 a week in the season, £8 in the summer, with a bonus of £1 for a win, 10/- for a draw. The fee for an international match, be it in Wembley or Rio, was a flat £20. After his goals beat Scotland in front of 120,000 at Hampden Park, Lawton told me he stood in the corridor all night on the packed train back to London.

There was a poignant piece in the Mirror last week. From his council house in Red- car, old Wilf Mannion admitted he was des- titute but applauded the players' union for still paying his heating bills when 'things are really bad and we don't know who to turn to'; and also for funding his trip to Brazil in 1988 when Pele invited the game's finest surviving legends to a banquet. 'That was the first holiday we'd had since 1954,' said Mannion. `Wilf was our golden boy,' says Matthews, 'generous to a fault on the field, a maker as well as a taker of goals.'

I last spoke, honoured, to Matthews and Finney at the glittering London dinner which launched Sir Stan's riveting biogra- phy by David Miller. Lawton couldn't make it; he was nursing his sick and beloved wife, Gaye, in their tiny council home in Notting- ham. Can there ever have been a more complete and classic centre-forward than Tom Lawton? Half a dozen years ago, I hawked round an outline we'd prepared for an autobiography. The articulate, dill sharp old hero had organised the makings of a winner. No London publisher even asked him down for lunch. Most of them — boasting sport their speciality — had unbe- lievably never heard of him.

Lawton had it all: on the ground or in the air. Tom had finesse, courage, delicacy and an almighty oomph. When he left his £20-a week game, nothing. Just increasing visits by bailiffs, debt collectors and, once, even the cops (he admits, at tether's end, he bounced a cheque). But pride in his past remains, and he never tires of telling how Stan used to centre it from the right wing (a leaden, leather, muddied cannonball then) with the lace on the ball pointed towards the goal. For Tom's forehead's sake. Team- work.

Sir Stan has snuggled back at his roots near Stoke. Finney is still president of both his firm of plumbers and Preston North End. In 1952, he was offered £10,000 on signature, £150 a month and huge bonuses to play in the Italian League for Palermo. He told his Preston chairman, a builder called Nathaniel Buck, who was paying him £18 a week. Said Buck: 'What's that money t'thee, Tom? You're Preston. Tha'll play f Preston or tha'll play f nobody.'