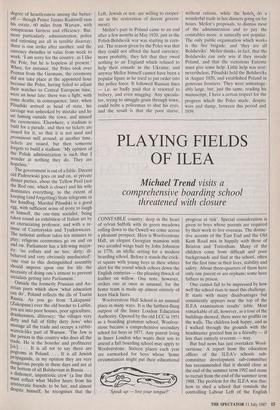 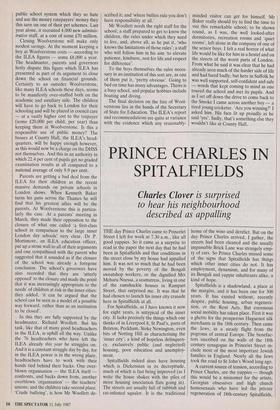 CONSTABLE country: deep in the heart of sylvan Suffolk with its green meadows rolling down to the Orwell we come across a pleasant prospect. Here is Woolverstone Hall, an elegant Georgian mansion with two arcaded wings built by John Johnston in 1776, an idyllic setting for a modern boarding school. Before it stands the crick- et square with young boys in their whites alert for the sound which echoes down the English centuries — the pleasing thwack of leather on willow. One note, however, strikes one at once as unusual, for the home team is made up almost entirely of keen black faces.

Woolverstone Hall School is an unusual place in many ways. It is the farthest-flung outpost of the Inner London Education Authority. Opened by the old LCC in 1951 as a boarding grammar school, Woolver- stone became a comprehensive secondary school for boys in 1977. Any parent living in Inner London who wants their son to attend a full boarding school may apply to Woolverstone. Sixteen places each year are earmarked for boys whose 'home circumstances might put their educational 'Speak up — lost your tongue?' progress at risk'. Special consideration is given to boys whose parents are required by their work to live overseas. The distinc- tive accents of the East End and the Old Kent Road mix in happily with those of Brixton and Tottenham. Many of the children come from difficult and poor backgrounds and find at the school, often for the first time in their lives, stability and safety. About three-quarters of them have only one parent or are orphans; some have fathers in prison.

One cannot fail to be impressed by how well the school rises to meet this challenge. It starts with many disadvantages but consistently appears near the top of the ILEA examination results' table. Most remarkable of all, however, as a tour of the buildings showed, there were no graffiti on the walls. The children look happy, and as I walked through the grounds with the headmaster greeted him in a friendly — if less than entirely reverent — way.

But bad news has just overtaken Wool- verstone. A report from the education officer of the ILEA's schools sub- committee development sub-committee has recommended that it should close at the end of the summer term 1992 and cease to recruit from the end of the summer term 1988. The problem for the ILEA was this: how to shed a school that reminds the controlling Labour Left of the English

public school system which they so hate and use the money ratepayers' money they this save on one of their pet schemes. Last year alone, it recruited 4,000 new adminis- trative staff, at a cost of some £70 million.

Closing Woolverstone will make only modest savings. At the moment keeping a boy at Woolverstone costs — according to the ILEA figures — some £8,000 a year. The headmaster, parents and governors hotly dispute this figure which ILEA has presented as part of its argument to close down the school on financial grounds. Certainly to an outsider Woolverstone, like many ILEA schools these days, seems to be manifestly over-staffed both on the academic and auxiliary side. The children will have to go back to London for their schooling and will be placed in council care — at a vastly higher cost to the taxpayer (some £20,000 per child, per year) than keeping them at Woolverstone. Is this a responsible use of public money? The bosses at County Hall, the ILEA's head- quarters, will be happy enough however, as this would now be a charge on the DHSS not themselves. And this in an authority in which 22.4 per cent of pupils get no graded examination results at all compared to a national average of only 9.9 per cent.

Parents are getting a bad deal from the ILEA for their children as the recent massive demands on private schools in London shows. When Kenneth Baker turns his guns across the Thames he will find that his greatest allies will be the parents. At Woolverstone this is particu- larly the case. At a parents' meeting in March, they made their opposition to the closure of what one called 'a first-class school in comparison to the large inner London day schools' very clear. Dr P. Mortimore, an ILEA education officer, put up a stone wall to all of their arguments and one sympathised with the parent who suggested that it sounded as if the closure of the school was already a foregone conclusion. The school's governors have also recorded that they are 'utterly opposed' to the closure and made the point that it was increasingly appropriate to the needs' of children at risk in the inner cities: they added, 'it can be argued that the school can be seen as a model of a possible way forward, rather than as an institution to be closed'.

In this they are fully supported by the headmaster, Richard Woollett. But his task, like that of many good headteachers in the ILEA, is uphill all the way. Unlike the 76 headteachers who have left the ILEA already this year he struggles on. And it is a constant struggle day by day, for in the ILEA power is in the wrong place, headteachers have to work with their hands tied behind their backs. One over- blown organisation — the ILEA itself — confronts, and backs down from, another overblown 'organisation' — the teachers' unions; and the children take second place. 'Crude bullying', is how Mr Woollett de-

scribed it; and 'where bullies rule you don't have responsibility at all.'

Mr Woollett needs the right staff for the school; a staff prepared to get to know the children, the rules under which they need to live, and, above all, as he put it, 'who knows the limitations of those rules'; a staff who will follow him in his aim 'to elevate patience, kindness, zest for life and respect for difference'.

To the boys themselves the rules neces- sary in an institution of this sort are, as one of them put it, 'pretty obvious'. Going to bed on time has many advantages. Theirs is a busy school, and popular hobbies include boating and diving.

The final decision on the fate of Wool- verstone lies in the hands of the Secretary of State for Education. The ILEA's report and recommendations are quite at variance with the evidence which any reasonably- minded visitor can get for himself. Mr Baker really should try to find the time to vist this remarkable school; to be shown round, as I was, the well looked-after dormitories, recreation rooms and 'quiet rooms', left alone in the company of one of the senior boys. I felt a real horror of what life would be like for him in a hostel and on the streets of the worst parts of London. From what he said it was clear that he had already seen much of the harder side of life and had fared badly; but here in Suffolk he was well supported, self-confident and safe — words that kept coming to mind as one toured the school and met its pupils. And as I set off down the drive to come back to the Smoke I came across another boy — a tired young cricketer. 'Are you winning?' I asked him. His face lit up proudly as he said 'yes'. Sadly, that's something else they wouldn't like at County Hall.