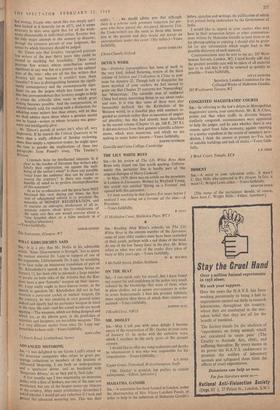 CONGESTED MAGISTRATES' COURTS SIR,—In referring to the law's delays in

Metropolitan magistrates' courts, your contributor, Mr. R. A. Cline, points out that when traffic in divorces became similarly congested, commissioners were appointed to help the judges, and he asks whether there is any reason, apart from false economy, against resorting to a similar expedient in the courts of summary juris- diction. I think the answer at present is—Yes, lack of suitable buildings and lack of clerks.—Yours faith- fully,