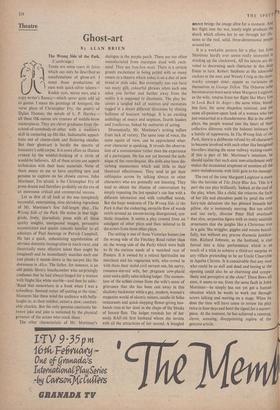 By ALAN BRIEN The Wrong Side 'of the Park. (Cambridge.) THERE are some tours de force which can only be described as manifestations of ghost-art. I mean those productions of men with quick-silver talents— Kodak eyes, stereo ears, and a copy-writer's fluency—which never quite add up to genitii. I mean the paintings of Annigoni, the verse plays of Christopher Fry, the poetry of Dylan Thomas, the novels of L. P. Hartley— all these OK-names are creators of middle-brow masterpieces. They are clever graduates from the- school-of-somebody-or-other with a medium's skill in conjuring up life-like, fashionable appari- tions out of cheese-cloth and flickering candles. But their ghost-art is hardly the spectre of humanity's cold corpse. It is more often an illusion evoked by the wishful-thinking of a circle of would-be believers. All of these artists are superb technicians with their basic materials. None of them seems to me to have anything new and genuine to capture on his chosen canvas. John Mortimer, I'm afraid, is the Christopher Fry of prose drama and therefore probably on the eve of an enormous critical and commercial success.

Let us first of all look at the one completely successful, entertaining, time-shrinking ingredient of Mr. Mortimer's first full-length play, The Wrong Side of the Park. He writes in that high- grade, lively, journalistic prose with all those quirky insights, unexpected images, persuasive eccentricities and quaint conceits familiar to all admirers of Paul Jennings or Patrick Campbell. He has a quick, unhesitating apprehension of obvious domestic incongruities (a much rarer, and theatrically more effective talent than might be imagined) and he immediately snatches each one and plonks it upside down in the tea-pot like the dormouse in Alice. The father, for instance, is an old public library beachcomber who surprisingly confesses that he had always longed for a woman with thighs like white marble—and then he adds : 'Read that somewhere in a book when I was a schoolboy. Seemed rather off-putting at the time.' Moments like these wind the audience with belly- laughs or, at their mildest, extort a slow, comfort- able chuckle. But the only genuine continuity be- tween joke and joke is sustained by the physical presence of the actors who crack them.

The other characteristic of Mr. Mortimer's dialogue is the purple patch. These are too often manufactured from marzipan dyed with coch- ineal. They are bon-bon mots. There is a certain greedy excitement in being pelted with so many sweets in a theatre which today is on a diet of new bread or stale cake. But eventually you can have too many glib, colourful phrases when each one takes you farther and farther away from the reality it is supposed to illuminate. The play be- comes a tangled ball of motives and memories tugged in a dozen different directions by shining balloons of buoyant verbiage. It is an exciting anthology of essays and setpieces, fourth leaders and feuilletons, linked by outbursts of acting.

Dramatically, Mr. Mortimer's writing suffers from lack of variety. The same tone of voice, the same squint of view, can be appreciated what- ever character is speaking. It reveals the observa- tion of a commentator rather than the experience of a participant. He has not yet learned the tech- nique of the ventriloquist. His dolls also have dis- turbing mannerisms which add little to their theatrical effectiveness. They tend to get their soliloquies across by talkiug always to other characters who are pointedly not listening. They tend to obtain the illusion of conversation by simply repeating the last speaker's cue line with a different intonation and with reshuffled words. But the basic weakness of The Wrong Side of the Park is that the endearing, enviable flow of words swirls around an unconvincing disorganised, syn- thetic situation. It seems a play created from an amalgam of other' plays and then tailored to fit the actors from those other plays.

The setting is one of those Victorian houses (on the wrong side of the Finchley Road rather than on the wrong side of the Park) which were built to fit the curious needs of a vanished race of Pooters. It is owned by a retired Spiritualist tea merchant and his vegetarian wife, who crowd in with them their stolid civil servant son, his nervy, romance-starved wife, her pregnant cow-placid sister and a shifty sales-talking lodger. The momen- tum of the action comes from the wife's sense of grievance that she has been cast away in this shadowy backwater while a gay, modern, woman's magazine world of electric mixers, candle-lit Soho restaurants and quick-stepping flower-giving hus- hands rises at her door in the shape of the blocks of luxury flats. The lodger reminds her of her seedy RAF-ish first husband whom she invests with all the attractions of her second. A bungled seance brings the image alive for a moment. And her flight into the wet, lonely night produces the shock which allows her to see through her illu- sions to the real, solid, three-dimensional people. around her.

It is a workable pattern for a play. but John Mortimer hardly ever seems really interested In winding up the clockwork. All his talents are de- voted to decorating each character in this deeP frieze in turn. Robert Stephens as the adenoidal cuckoo in the nest, and Wendy Craig as the slum- mocky younger sister, appear as variations on themselves in George Dillon. The Osborne echo becomes even more eerie when Margaret Leighton. as the wife, returns from her flight like Mary Ure in Look Back In Anger—the same white, blood- less face, the same shapeless raincoat, and the same all-passion-spent look of a woman who has just miscarried in a thunderstorm. But in the other plays, the people wound into the heart of their collective dilemma with the hideous intimacy of a family of tapeworms. In The Wrong Side of the Park, there is a deliberate refusal by all characters to become involved with each other like benighted travellers sharing the same railway waiting-room If this is part of Mr. Mortimer's intention, he should realise that such stoic non-attachment onlY makes the occasional eruptions of emotion all the more melodramatic with little gain to his message.

The rest of the time Margaret Leighton is more like the heroine of The Deep Blue Sea. This is a part she can play brilliantly. Indeed, at the end of the play, when, like a child, she relearns the facts of her life and abandons petal by petal the rosy fairy-tale delusions she has pressed beneath her pillow, she is immensely moving. But too often and too early, director Peter Hall overloads that slim, serpentine figure with so many neurotic ornaments that she jangles like a Christmas tree in a gale.'She wriggles, giggles and moans beauti- fully, but without any precise dramatic justifica- tion. Richard Johnson, as the husband, is also forced into a false performance which is as much of a trick to achieve a third-act surprise as any villain pretending to be an Uncle Cheeryble in Agatha Christie. Is it conceivable that any man who could be so dull and dead and boring at the opening could also be so charming and sympa- thetic and perceptive at the close? These flaws all stem, it seems to me, from the same fault in John Mortimer—he simply has not yet got a human situation which he wants to work out through actors talking and moving on a stage. When he does the time will have come to review his play twice in four days and hoist the signal for a master- piece. At the moment, he has achieved a cunning, clever, amusing, disappointing replica of the genuine article.