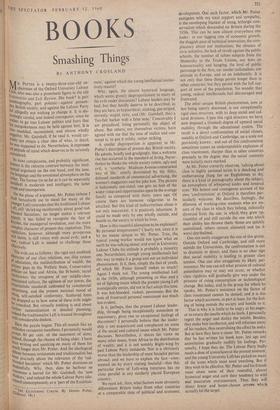 By ANTHONY CROSLAND 114 _ R. POTIER is a twenty-three-year-old ex- chairman of the Oxford University Labour Club, who was also a prominent figure in the old Universities and Left Review. His book* is part autobiography, part polemic—against present- day British society, and against the Labour Party for allegedly not wishing io change it. It is dis- armingly candid, and indeed courageous, since he his to go into Labour politics and fears that n's outspokenness may be held against him. It is also muddled, inconsistent, and almost wholly negative; Mr. Gaitskell, if he read it, would cer- tainly not obtain a clear idea of what, in detail, he was supposed to do. Nevertheless, it expresses 4n attitude of mind which deserves to be seriously considered.

feature most conspicuous, and probably significant, a is the extreme contrast between the intel- lectual argument on the one hand, and the tone, ue,_ language and the emotional atmosphere on the °Iner. The former (in so far as it can be separately distilled) is moderate and intelligent, the latter crude and intemperate. Lein the plane of argument, Mr. Potter (whom I shall henceforth use to stand for many of the '011nger Left) concedes that the traditional Labour Left, still 'shrieking incoherently about good red- blooded Socialism,' no longer makes a relevant appeal; it has failed to recognise the fact of k e3mea, the managerial revolution, and the more „ -"Vies character of present-day capitalism. This capitalism, however, although more prosperous and stable, is still rotten with social evils; and a ",,..evy, radical Left is needed to challenge these effectively ;rile evils are as follows : the rigid and snobbish of education, of our class relations, our elite system el education, the maldistribution of wealth, the serious gaps in the Welfare State, Conservative Pidicies on Suez and Africa, the H-bomb, racial intolerance the smugness of our middle-class- `I d'Mninated culture, the ugliness of our towns, the Materialistic standards cultivated by commercial advertising, and the present national mood of ,Intig, self-satisfied conformity. Scattered hints 'bre dropped as to how some of these evils might ,e remedied. But virtually nothing is said about turther nationalisation or detailed planning; i_ndeed the traditionalist Left is treated throughout With considerable disdain. ilere the puzzle begins. This all sounds like an Orthodox revisionist manifesto. I personally would o i ccePt 80 per cent, of the statement of aims; bndeed, through the chance of being older, I have een writing and speaking on many of them for much longer than Mr. Potter. And the ideological d beunte between revisionists and traditionalists has kieen precisely about the relevance of the 'red- oded Socialism' which Mr. Potter dismisses so disdainfully Why, then, does he harbour so 1:.11nrnous a hatred for Mr. Gaitskell, the 'new L',Inkers,' and indeed the whole Labour Party (dis- missed contemptuously as a 'part of the Establish- THE GLITTERING COFFIN. By Dennis Potter. 'ollancz, 18s.)

ment,' against which the young intellectual instinc- tively reacts)?

Why, again, the almost hysterical language, which seems grossly disproportionate to many of the evils under discussion? Labour leaders may be bad; but they hardly deserve to be described, as they are here, as hypocritical, stinking, pin-striped, slovenly, stupid, tatty, and (Mr. Gaitskell, this) a 'fun-fair barker with a false nose.' Conceivably I am prejudiced, being personally the object of abuse. But others, not themselves victims, have agreed with me that the tone of malice and con- tempt is, to put it mildly, rather striking.

A similar disproportion is apparent in Mr. Potter's description of present-day British society. He admits, briefly and grudgingly, that a welcome rise has occurred in the standard of living, Never- theless he thinks the whole society rotten, ugly and evil, a 'synthetic Madison-Avenue-constructed way of life,' utterly dominated by the filthy, debased standards of commercial advertising, the women's magazines and the juke box. The picture is ludicrously one-sided; one gets no hint of the wider vistas and opportunities open to the average family as compared with thirty years ago. Of course there are immense vulgarities to be attacked. But this kind of indiscriminate abuse is not only inaccurate; it is positively inhumane. It could be made only by one wholly outside, and hostile to, the society in which he lives.

How is this resentful alienation to be explained? By personal temperament? Clearly not, since it is by no means unique to Mr. Potter. True, the typical young worker would not 'vow what on earth he was talking about; and even in University Labour Clubs his attitude is probably a minority one. Nevertheless, enough young intellectuals feel this way to make it a group and not an individual phenomenon. Is it, then, simply the fact of youth, of which Mr. Potter himself makes so much? Again I think not. The young intellectual Left in the 1930s, although possessing an elan and a set of fightingissues which the present young Left nostalgically envies, did not in fact adopt this tone. It was hot-blooded, violent, passionate. But the note of frustrated personal resentment was much less evident.

Is it, perhaps, that the present Labour leader- ship, through being exceptionally somnolent or reactionary, gives rise to exceptional feelings of discontent'? I personally believe that the leader- ship is too acquiescent and complacent on some of the social and cultural issues which Mr. Potter discusses. Nevertheless, it shares his views on many other issues, from Africa to the distribution of wealth; and it is not notably Right-wing by past Labour Party standards. Nor is it obviously worse than the leadership of most Socialist parties abroad; and we have to explain the fact—com- mented on by every visiting Socialist—that this particular form of Left-wing bitterness has no close parallel in any similarly placed European country.

We must ask, then, what factors most obviously differentiate Britain today from other countries at a comparable state of political and economic development. One such factor, which Mr. Potter castigates with my total support and sympathy, is the enveloping blanket of smug, lethargic con- servatism which descended on Britain during the 1950s. This can be seen almost everywhere one looks : in our lagging rate of economic growth, the sluggish pace of technical innovation, the com- placency about our institutions, the absence of civic initiative, the lack of revolt against the public schools, the number of taboo subjects from the Monarchy to the Trade Unions, our laws on homosexuality and hanging, the level of public patronage to the Arts, our insular nationalism, our attitude to Europe, and so on indefinitely. It is not only that these things persist longer than in other countries; but they persist with the full sup- port of most of the population. No wonder that young, radical intellectuals feel discouraged and frustrated.

The other unique British phenomenon, now at last being openly discussed, is our exceptionally rigid class structure, with its deep social and cul- tural divisions. Upon this rigid structure we have now imposed a (limited) degree of upward social mobility through the educational system. The result is a direct confrontation of social classes, notably at Oxford and Cambridge, on a scale not previously known : and out of this confrontation sometimes comes an understandable explosion of class resentment, sharper than in other countries precisely to the degree that the social contrasts were initially more marked.

As Mr. Potter correctly observes, 'talking about class in highly personal terms is a shocking and embarrassing thing for an Englishman to do; there is a kind of pornography about the subject, an atmosphere of whispered asides and lowered eyes.' His honest and courageous account of his own 'confrontation' at Oxford is therefore par- ticularly welcome. He describes, feelingly, the dilemma of working-class students who are un- sure of the class to which they belong, culturally divorced from the one in which they grew up, resentful of and still outside the one into which their ability has thrown them. Some are quickly assimilated; others remain alienated and (as it were) detribalised.

One can easily exaggerate the size of this group. Outside Oxford and Cambridge, and still more outside the Universities, the confrontation is not so dramatic or direct; and there is no clear sign that social mobility is leading to greater class tension. One can also exaggerate its likely per- manence. No one can tell what process of cultural assimilation may or may not occur, or whether class rigidities will gradually give way under the pressure of rising consumption or technological change. But today, and in the group for which he speaks, Mr. Potter's insistence on the factor of class resentment cannot be denied; and it is this factor which accounts, in part at least, for the feel- ing of being outside the society and hostile to it.

That is why it is futile to be angry at his anger, or to return the insults which he hurls. I personally regret the anger and dislike the insults. Besides, they make him incoherent, and will infuriate many of his readers, thus neutralising the effect he seeks. But at least they have a cause. Mr. Potter remarks that he has written his book now, lest age and . assimilation gradually mollify his feelings. Per- sonally, I hope they do. The Labour Party badly needs a dose of iconoclasm at the present moment; and the young University Left has picked on many of the icons which most need smashing. But if they wish to be effective, Mr. Potter and his friends must abate some of their resentful, almost hysterical anger and curb their tendency to wild and inaccurate overstatement. Then they will direct fewer and better-chosen arrows which actually hit the target.