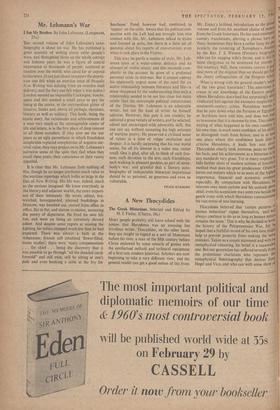 I Am My Orother. By John Lehmann. (Longmans, 25s.) THE second volume of John Lehmann's auto- biography is about his war. He has published a great quantity of writing about other people's wars, and throughout those on the whole corrupt and hideous years he was a figure of central importance to thousands of people, scattered at random over the world, who cared for or aspired to literature. (lean just about recapture the depres- sion one felt when an overdue issue of Penguin New Writing was missing from an overdue mail delivery, and the fury one felt when it was stolen.) London seemed an impossible Cockaigne; bombs, spam and dirt seemed a small price to pay for being at the centre, in the metropolitan glitter of theatres, books and, above all perhaps, decisions, literary as well as military. This book, being the -inside story, the vicissitudes and achievements of a man very much at the unimaginable centre of life and letters, is in the first place of deep interest to all those outsiders. If they now see the war years as an ugly parenthesis in which fraudulent simplicities replaced complexities of negative sur- vival value, they may project on to Mr. Lehmann's narrative some of the spite they feel when they recall these years, their conscience or their vanity appalled.

It is clear that Mr. Lehmann feels nothing of this, though he no longer attributes much value to the wartime reportage which bulks so large in the files of New Writing. His life was, indeed, much as the envious imagined. He knew everybody in the literary and adjacent worlds, the more import- ant of them intimately. He wrote, edited, fire- watched, horneguarded, planned bookshops in Moscow, was bombed out, moved from office to office, flat to flat, and station to station, savouring the poetry of departures. He lived his own life too, and went on being an extremely shrewd editor. And despite some regrets at missing the fighting, his milieu changed much less than he had expected. There was always a bath at the Athena:um; friends still inhabited 'flower-filled, messy studies'; there were 'many compensations . . . the chief . . . being the discovery that it was possible to go through "all the dreaded cards foretold" and still exist, still be sitting at one's desk and even booking a table at the Ivy for

luncheon.' Food, however bad, continued to 'appear' on the table. Aware that his political con- nection with the Left had not brought him into contact with life, Mr. Lehmann talked in trains and listened in pubs, but there is a faint air of pastoral about his reports of conversation, even when it took place in the Fitzroy.

This may be partly a matter of style. Mr. Leh- mann aims at a water-colour delicacy and an absence of visible strain; and this succeeds com- pletely in the account he gives of a profound personal crisis in mid-war. But it cannot convey his apparently urgent sense of the need for an active relationship between literature and life—a sense sharpened by the understanding that such a • relationship needed to be not less close but more subtle than the oversimple political commitment of the Thirties. Mr. Lehmann is an admirable writer, but not the kind of writer he himself admires. However, that puts it too crudely; he admired a great variety of writers, and he selected, edited and encouraged with admirable skill; this one can say without accepting his high estimate of wartime poetry. He preserved a civilised sense of values in a time of vulgar exaltation and despair; it is hardly surprising that his real world seems, for all his interest in a wider one, rather small. One is glad, after all, to think of such fine- ness, such devotion to the arts, such friendships, such walking in pleasant gardens, as part of some- body's war; and grateful that a literary auto- biography of indisputable historical importance should be so personal, so generous and even so vulnerable.