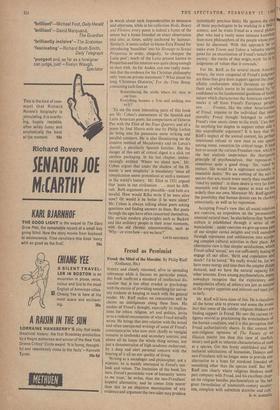 Freud: the Mind of the Moralist. By Philip Rieff. (Gollancz, 30s.)

SUBTLE and closely reasoned, alive to spreading relevances while it focuses on particular points, this book reaffirms a standard of intellectual dis- cussion that is too often evaded in psychology with the excuse of providing something for univer- sity students or keeping in touch with the general reader. Mr. Rieff makes no concessions and he claims no indulgences along these lines. His studies of Freud's thought, especially its implica- tions for ethics, religion, art and politics, invite us to a radical examination of what Freud actually wrote. He brings that into relation with the actual and often unexpected writings of some of Freud's contemporaries who now exist chiefly as vestigial remains in textbooks and secondary sources, and above all he keeps the whole thing serious, not just a demonstration of high academic endeavour, by a deep and alert personal concern with the bearing of it all on our quality of living.

Writing as a sociologist and philosopher, not a scientist, he is mainly interested in Freud's out- look and values. The limitation of the book lies here. Freud's pessimistic view of humanity 'seems to me truer,' he writes, than the neo-Freudians' hopeful alternative; and he comes little nearer than this to an objective examination of any evidence and argument the two sides may produce

SPECTATOR, FEBRUARY 12, 1961 T (admittedly precious little). He ignores the clattli of these psychologists to be working in a field d; science; and he treats Freud as a moral philosei pher who had a vastly more intimate knowledit! than most philosophers of the people whose prat, lems he discussed. With this approach he eld make even Totem and Taboo a valuable starthll point for an examination of Freud's beliefs abed society : the merits of that origin myth 'lie in till judgments of values that it conceals.'

For Mr. Rieff, as for several recent America' writers, the most congenial of Freud's judgmeel are those that give them support against the cheel affable conformism which threatens to end them and which seems to be sanctioned by '0+ confidence in the fundamental goodness of hufritel nature which characterises the American view marks it off from Freud's European per! wet tive. . . . Fromm, like the other Americanise. of Freud, imputes to the individual that trInet morality Freud thought belonged to culture- , Freud's view seems closer to the truth.' Can the be anything but dogma to support either side it this unprofitable argument? It is here that Mt' ! Rieff's neglect of the animal context, his perhafts intentional refusal to view man as one speciet among many, constricts his critical range. ItIeads him to accept the curious Freudian view, which the last analysis undermines the therapeutic! principle of psychoanalysis, that repression IS sometimes quite a good thing : 'for, ruled bY instinct, life would be a nightmare scramble of t insatiable desire.' We see nothing of the sort in species that are, much more nearly than mankind 'ruled by instinct' : in them desire is very far Ir0n! insatiable and their lives appear at least no less orderly than our own. Moreover Mr. Rieff ignores the possibility that human desires can be checked consciously, as well as by repression.

Accepting Freud's view that all social relations are coercive, an imposition on the 'permanentlY unsocial natural man,' he also believes that 'human culture is established through a series of re- nunciations': under coercion we give up some part of our simpler carnal delights and trick ourselves through repression and sublimation into accept- ing complex cultural activities in their place. An alternative view is that simpler satisfactions, which Freud called 'sexual,' are not sufficiently lasting to engage all our effort. 'Birth and copulation and death? I'd be bored.' We really would be, for we have more energy and time than the simpler things demand, and we have the natural capacity inr other interests. Even among psychoanalysts, manY nowadays recognise that the exploratory and manipulative efforts of infancy are just as natural as the simpler appetites and interests and start just as early.

Mr. Rieff will have none of this. He is therefore

all the better able to present and assess the ironic fact that some of the subtler religious thinkers are finding support in Freud. He sees the current re- ligious revival as proclaiming the wretchedness of the human condition, and it is this perception that Freud authoritatively shares. In that context the anti-religious opinions of 'The Future of an Illusion matter less than this view of conflict, misery and guilt as inherent characteristics of man as a species. Get this firmly established and the meliorist solicitations of humanists, Deweys and neo-Freudians will no longer seem to provide anY alternative to a hope for mankind founded on something other than the species itself. But Mr. Rieff sees clearly where religious thinkers must part company with Freud, and his excellent chap- ter on religion handles psychoanalysis as 'the last great formulation of nineteenth-century secular- ism, complete with substitute doctrine and cult.'