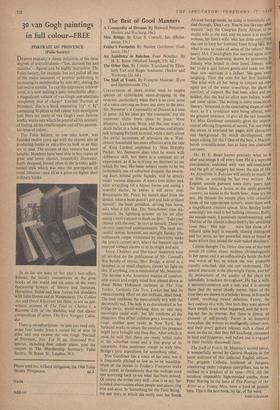 The Best of Good Manners

A Commodity of Dreams. By Howard Nemerov. (Seeker and Warburg, 16s.)

An Aspidistra in Babylon. Four Novellas. By H. E. Bates. (Michael Joseph, 13s. 6d.) The Stuff of Youth, By Francois Mauriac. (Eyre and Spottiswoode, 15s.) COLLECTIONS of short stories tend to inspire spasms of reminiscent name-dropping in the reviewer, particularly when there is no clear sense of a voice carrying on from one story to the next. Mr. Nemerov's A Commodity of Dreams is a case in point. All his ideas get 'the treatment,' but the treatment shifts from piece to piece.- Mme Mastaba, Layamon Brute and the rest watch a death ballet in a hotel pool, the names and elyptic talk bringing Firbank to mind, while a story about the awful incursions of television on a West- chester household has more affinities with the side of Ring Lardner exploited by Miss Dorothy Parker. Mr. Nemerov does what he wants with deliberate skill, but there is a constant air of experiment, as if he is trying on manners to see which fits best. His basic subject seems to be the fashionable one of suburban disquiet, the swarm- ing fears behind polite facades, and he attacks under various disguises. A man's foot itches and, after scratching till a blister forms and seeing a scornful doctor, he knows it will never stop. Respectable Mr. Paley, his mouth dead from the dentist, takes a bank guard's gun and fails to shoot himself: the bank president, driving him home, asks what it felt like. The Westchester man dis- connects the lightning arrester on his set after seeinia native stoned to death on film : 'Take your chance with the rest,' he says to himself. These are cleverly contrived entertainments. The most suc- cessful stories, however. are outright fantasy (the millionaire corpse embalmed by electricity sucks the town's current dry), where the humour can be enjoyed without alarms as to its origin and aim. Joyce, Chekhov and Sherwood Anderson were all invoked on the publication of Mr. Connell's first bundle of stories. Mrs. Bridge, a novel in a hundred or so small chapters, throws no light on this. If anything, one is reminded of Mr. Nemerov. The heroine is the American matron of comfort- able means and empty mind first pinned down in those Helen Hokinson cartoons in The New Yorker. Certainly The New Yorker has had its

contaminating effect on this brilliant, dead book. The tone combines the meticulously wry with the decorously sad. The lady is as documented in her bridge-party, social-working days as any easy sociologist could wish : her life confirms all the diagnoses. One of her children gets a loveless mar- riage, another goes randy in New York, her husband works to amass the comfort his presence might have brought and then dies. After which, it must be said that there are many lethal stabs at the suburban scene and a fine grasp of its apparatus. False sentiment creeps in with Mrs. Bridge's lyric aspirations for something other.

Miss Gordimer has a voice of her own, but it is frequently pitched so low as to be inaudible.

Most of the stories in Friday's Footprint make

their points so fastidiously that the endings send one scurrying back to see what has been missed.

Of course she writes very well—that is to say, her isolated observations abOut people and places ring true and alive. In 'Something for the Time Being,' the one story in which she really uses her South

African backgrounds, an irony is beautifully car- ried through. 'Don't cry. You're just like any other woman,' says the Congress Party African to his stupid wife at the end, and we know it is another woman, his boss's wife, who has done everything she can to keep her husband from firing hfm. But what is one to make of some of the others? Shy. heavy Mrs. Cunningham has married again after her husband's drowning, drawn by proximity to Johnny who helped in their hotel. Johnny asks her to do a quiz before guests and reads out that their new marriage is a failure. She goes awa Y laughing. Then she cries for her first husband 'She tried with all her being to conjure up on again out of the water something; the ghost of comfort, of support. But that boat, silent and un- bidden, that she had so often seen before, would not come again.' The writing is more consciousl■ 'literary,' balanced, in the concluding stages of each story, as if a revelation were being offered, with the greatest reticence, to give all the rest meaning Yet Miss Gordimer constantly gives the impres- sion of offering fragments of novels. For one thing. she seems to overload her pages with character and background. So much development, one keeps asking, for this? One of the best, a Macorn- berish crocodile-hunt, has at least one character too many.

Mr. H. E. Bates knows precisely what he is after and brings it off every time. He is a supreme anecdotalist,. endowed with vast self-confidence and the gift of imagery ten times the size of life. An Aspidistra in Babylon will satisfy as much, or as little, as anything he has ever written. All English seaside garrison town forty years ago. the Italian lakes, a house in the apple-growing country, an island in the South Seas : these are his sets. He threads his simple plots with colourful knots of the appropriate scenery, studs them with a magnificent creature apiece. Miss Bentley looks amazingly less staid in her bathing costume; Ruby, the seaside maid, is positively mouthwatering; and Therese of the islands is described by her unwilling lover thus : 'Her legs . . . were like those of a billiard table built in smooth, shining mahagonY and her arms, no less powerful, were as broad as hams where they joined the wide naked shoulders.'

Colette thought The Other One one of her best novels (it comes about midway chronologically In her opus) and it so suffocatingly holds the best and worst of her, to which she was probably equally attached, that one can understand. The central character is the playwright Faron, and her sly intimations of the quality of his plays are splendidly broadcast throughout. He has a wife. a secretary-mistress and a son, and it is among these that the novel chiefly moves. Most of the time they are shown in a holiday house, in Franche Comte, revolving round delicious Fanny, the lazy cushion of a wife. One feels they were shoved there simply to see what happened, and the work- ing-out has its interest. But there is almost an element of self-parody. Faron is so leoninely masculine, the women so intelligently subservient. and their every gesture releases such a cloud of scent on the air, that they fall headlong, cocooned in fard and fripperies, well before one is engaged in their (wittily discussed) fates.

The Stuff of Youth, M. Mauriac's second novel, is wonderfully served by Gerard Hopkins in the

latest outcome of this collected English edition. The priggish Catholic boyhood of Jacques, smothering under religious caterpillars, has to be

realised as a product of its time—I914. All the sensitive, impossibly high-minded youths, from Peter Waring to the hero of The Portrait of the Artist as a Young Man, have a kind of genesis here. This is the best book, by far, of the week.