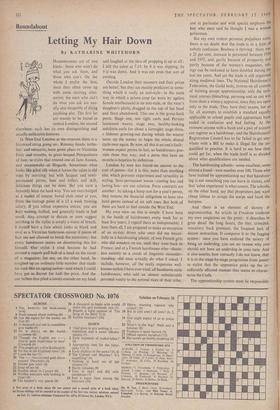 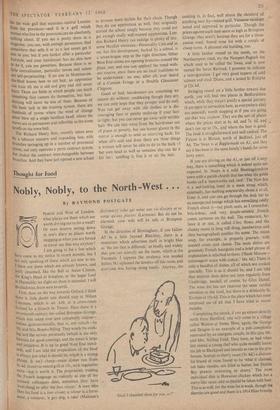 Letting My Hair Down

are mainly to be found in central London, the second elsewhere; each has its own distinguishing and usually unlikeable features.

In West -End London at the.moment there is a historical recap going on: Romney heads, turbu- lent and romantic, have given place to Victorian folds and-wreaths, to great. heaped Pompadours of hair; to styles that remind one of Jane Austen, and oveasionally of Hogarth. Sometimes what looks like piled silk when -it leaves the salon is old rope by morning; but with lacquer and semi- permanent perms, beer and rollers and skill, delicious things can be done. But you earn a heavenly head the hard way. You are overcharged as a matter of course; bored chits sneer at you, from the-vantage point of a £3 a week training salary, if you refuse expensive extras; you are kept waiting; bullied, and generally made to feel small. Any attempt to dictate or even suggest anything to the stylist is simply a waste of breath. I myself have a face which looks as blank and oval as a Victorian bathroom mirror if pieces of hair are not allowed to- break the monotony; but every hairdresser insists on discovering this for himself.. One stylist I tried because he had created, a superb puff-ball of a head on the cover of a magazine; for me; on the other hand, he roughed up an ordinary little number that made me look4ikean ageing melon—and which I could have got in- Barnet for half the price. And the one before-that piled a lovely cascade on my head

and laughed at the idea of propping it up at all : I left the salon at 7.15; by 8 it was slipping, by 9 it was down. And it was not even that sort of evening.

Outside London their manners and their prices are better; but they are mainly proficient in some- thing which is really an anti-style—in the same way in which a prison crop (as worn by ageless female intellectuals) is an anti-style, or the vicar's daughter's plaits, dragged to the top of her head and there abandoned. This one is the gorse-bush perm. Stage one, too tight curls and Persian laminated waves; stage two, healthy-looking indefinite curls for about a fortnight; stage three, a hideous growing-out during which the wearer saves up the money to begin the whole dismal cycle over again. By now, all this is no one's fault : women expect perms to last, so hairdressers pro- vide them that way; and a perm that lasts six months is hopeless by definition.

London by now has found-an. answer to the cost of perms—for it is this, more than anything else, which prevents experiment and versatility in styling. Semi-permanent waves—costing less and lasting less—are one solution.. Perm contracts are another : by taking a lump sum for a year's perms, they remove the financial obligation to have two hard perms instead of six soft ones. But both of these are hard to find outside the West End.

My own view on this is simple. I have been. in the hands of hairdressers every week for at least five years; I regard them as indispensable; I hate them all. I am prepared to make an exception of an ex-taxi driver who once did me beauti- fully in a hairdressing school; of two French girls who did wonders on me, until they went back to - France; and of a Finnish hairdresser who—doubt- less entirely as a result of linguistic misunder- standing—did once actually do what I asked. I

include, however, all the really expensive well- known stylists I have ever tried; all handsome male hairdressers, who add an almost unbelievable personal vanity to the normal vices of their tribe;

and in particular and with special emphasis the boy who once said he thought I was a woman policeman.

But my own violent personal prejudices aside, there is no doubt that the trade is in a plc of unholy confusion. Business is thriving: there was a 21 per cent, increase in personnel between 1950 and 1957, and, partly because of prosperity and partly because of the women's magazines, tak- ings can be reckoned to have doubled during the last ten years. And yet the trade is still organised along medimval lines. The National Hairdresser's Federation, the Guild body, frowns on all systems of training except apprenticeship; only the tech- nical courses (bleaching, perming and so on) win from them a wintery approval, since they are open only to the trade. They have their exams, but so far all attempts to establish a standard equally applicable to school pupils and apprentices have ended in confusion and bad feeling. At the moment anyone with a basin and a pair of scissors can register as a hairdresser, and the Hairdressers' Registration Council has so far failed to get any- where with a Bill to make it illegal for the un- qualified to practise. It is hard to see how they could get far, when the trade itself is so divided about what qualifications are needed.

The hairdressing schools—some excellent, some almost a fraud—now number over 100. Those who have trained by apprenticeship say that hairdress- ing is not something you can learn in classes, and that 'salon experience' is what counts. The schools, on the other hand, say that proprietors just want cheap labour to scrape the scalps and hand the hairpins.

And there is an element of slavery in apprenticeship. An article in Freedom confirms my own suspicions on the point : it describes in grim detail the long hours, the tiny, crowded, insanitary back premises, the frequent lack of decent instruction. It compares it to the fagging system: once you have endured the misery lf being an underdog, you see no reason why you should not have' an underdog in your turn. And it also asserts, how correctly I do not know, that it is in the stage-by-stage progression from junior to stylist that the apprentice picks up the in- sufferably affected manner that seems to charac- terise the Craft.

The apprenticeship system must be responsible for the wide gulf that separates central London from the provinces—and it is a gulf which women who live in the provinces can do absolutely nothing about. If you see a pretty dress in a magazine, you can, with enough persistence, find somewhere that sells it or as a last resort get it sent to you; but if you hanker after a particular hairstyle, and your hairdresser has no idea how to do it, you are powerless. Because there is so little centralisation, particular towns and salons are self-perpetuating: if no one in Moreton-on- the-Mud knows how to cut hair, an apprentice can train till she is old and grey and still never learn. There are fields in which people can teach something they cannot do themselves, but hair- dressing will never be one of them. Because of this basic lack in the training system, there are hundreds of towns where the wind of change never blew up a single bouffant head; where the waves are as permanent and inflexible as the stone Scrolls on the town hall.

The Richard Henry firm, recently taken over by a tobacco concern and expanding fast, with branches springing up in a number of provincial towns, not only operates a perm contract system, but makes the contract interchangeable between branches. And they have just opened a new school

to process more stylists for their chain. Though they do use apprentices as well, they originally started the school simply because they could not get enough really well-trained apprentices. Lon- don Richard Henry can indulge in plenty of tire- some Mayfair whimsies—Personality Cuts and so on; but this development, backed by a school, is a seven-league step in the right direction. Other West End salons are opening branches around the place, too; and one can applaud the trend with- out reserve, since there are no local traditions to be undermined : no one, after all, ever heard of a Cornish Fringe or a Double Gloucester Chignon.

Good or bad, hairdressers are something we cannot do without; maddening though they are, we can only hope that they prosper and do well. You can get away with old clothes or a dis- couraging face or patchy make-up if your hair is right; but you can never get away with terrible hair. We can stay away from the hairdresser out of pique or poverty, but one honest glance in the mirror is enough to send us scurrying back; for when all's said and done there are three things a woman will never be able to do to the back (. f her own head as well as someone else can do it for her: sandbag it, kiss it or set the hair.