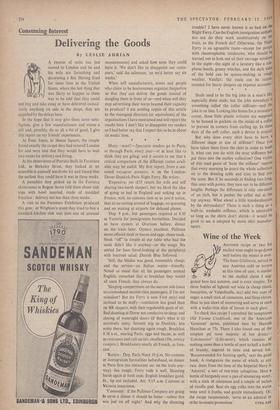 To check this recipe I consulted the sumptuous Old Vienna Cookbook, one of the American 'Gourmet' series, published here by Hamish Hamilton at 75s. There I also found one of the simplest yet most majestic of hot drinks- `Lebensretter' (Life-saver), which consists of nothing more than a bottle of port to half a bottle of brandy, sugared to taste and served hot. 'Recommended for fainting spells,' says the good book. A restqrative the name of which, at any rate, dates from the time of the Imperial Navy is 'Admiral,' a sort of red-wine zabaglione. Heat a bottle of burgundy over a pan of simmering water, with a stick of cinnamon and a couple of inches of vanilla pod. Beat six egg yolks into the warm wine until it froths, and guzzle immediately. Or, the recipe recommends, 'serve to an admiral in order to ensure promotion.' CYRIL RAY