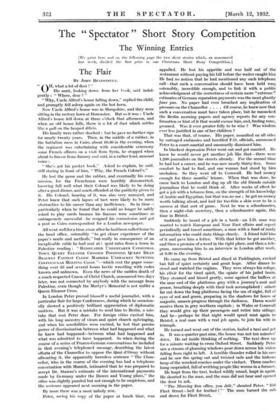 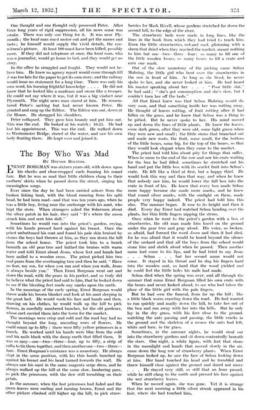 %Vo print hero and on tho following page the two short stories which, as announced last week, divided the first prize in our Christmas Short Story Competition.]

" Why, Uncle Alfred's house falling down," replied the child, and promptly fell asleep again on the hot lawn.

Now Uncle Alfred's house was in Shropshire, and they were sitting in the rectory lawn at Doncaster. But so it was : Uncle Alfred's house fell down at three o'clock that afternoon, and when an old house falls, there is a lot of dust which settles like a pall on the heaped debris.

His family were rather shocked : but he gave no further sign for nearly twenty years. Then, in the middle of a rubber, in the battalion mess, in Cairo, about 10.30 in the evening, when the regiment was entertaining with considerable ceremony some French officers on a visit from Syria, he stopped when about to finesse from dummy and said, in a rather loud, unusual voice :

" She's got his pocket book." Asked to explain, he said, still staring in front of him, Why, the French Colonel's."

He lost the game and the rubber, and eventually his com- mission, for the Frenchmen were horribly disconcerted, knowing 11111 well what their Colonel was likely to be doing after a good dinner, and much offended at the publicity given to it. His Colonel, hearing of it, was also very almoyed, and Peter knew that such lapses of tact were likely to be more obstructive to his career than any inefficiency. So in time— particularly when he found that he could no longer be safely asked to play cards because his finesses were sometimes so outrageously successful—he resigned his commission and got a post as Cairo correspondent for a London newspaper.

All went well fora time, even after he had been called home to the head office, ostensibly "to get closer experience of the paper's needs and methods," but really in consequence of an inexplicable cable he had sent at t -gent rates from a town in Palestine reading : " REDHEADED UNDERTAKER CATHEDRAL. TOWN QUERY ELEANOR CROSSED POISONING QUERY DEAN BRACKET FATTEST CLERIC MARRIED UNBRACKET SEVENING COFFEESUGAR MEETLNG CLOSE "—which cost the paper some- thing over £3 and several hours hectic wrestling with codes known and unknown. Even the news of the sudden death of a much respected Canon of Christ Church, announced two days later, was not connected by anybody with the message from Palestine, even though the Martyr's Memorial is not unlike a Queen Eleanor Cross.

In London Peter proved himself a useful journalist, with a particular flair for large Conferences, during which he occasion- ally showed a positively brilliant appreciation of diplomatic motives. But it was a mistake to send him to Berlin, a mis- take that cost Peter dear. For foreign cities excited him, with his long ancestry of vicars and quiet church upbringing, and when his sensibilities were excited, he lost that precise power of discrimination between what had happened and what he knew had happened—between what had happened and what was admitted to have happened. So when during the course of a series of Franco-German conversations he included in that evening's telephoned message, describing the latest efforts of the Chancellor to oppose the Quai d'Orsay without affronting it, the apparently harmless sentence " The Chan- cellor, who in the course of the evening has had a telephone conversation with Munich, intimated that he was prepared to accept Dr. Stamen's estimate of the international payments made by Germany under the Dawes and Young plans," the office was slightly puzzled but not enough to be suspicious, and the sentence appeared next morning in the paper.

By noon there was a most unholy row.

Peter, seeing his copy of the paper at lunch time, was

appalled. He lost his appetite and was half out of the restaurant without paying his bill before the-waiter caught him lie had no notion that he had mentioned any such telephone call—that such a conversation should have been held was,' ostensibly, incredible enough, and to link it with public acknowledgment of the correctness of certain more "extreme". estimates of German reparation payments was the most ghastly faux pas. No paper had ever breathed any implication of pressure on the Chancellor . . . . Of course, he knew now that such a conversation must have taken place, but he ransacked the Berlin morning papers and agency reports for any con- firmation or hint of it that would excuse him, and, finding none; groaned. Was it ever greater folly to be wise ? Was wisdom ever less justified in one of her children ?

That was that, of course. His paper, assaulted on all sides by outraged embassies and horrified F.O. officials, swnmoned Peter to a court-martial and summarily dismissed him. - In blackest depression Peter went out and got married. He knew he would never get another job like that—there were 1,200 journalists on the streets already. For the second time he had lost a career, and he was now nearly thirty-five. Some comfort he had to find, and one woman had stood by him unshaken. So they went off to Cornwall. He had money enough for three months' leisure. When that was done, he came back to London and dug up all the old friends outside journalism that he could think of. After weeks of effort he got a job with a tobacco firm, on the strength of his knowledge of Arabic and Egyptian, but that was no use ; he got no money worth talking about, and had far too thin a skin ever to be a success at that sort of game. Next he was a schoolmaster, then a night-club secretary, then a schoolmaster again, this time in Bristol.

Suddenly he heard of a job in a bank—an I.D. man was wanted to watch European and Near East affairs and report periodically and travel sometimes, a man with a fund of ready information who could state things clearly. A friend told him of it and gave hint a letter. With that letter he got another, and then a promise of a word in the right place, and then a tele- gram, summoning him to an interview in London after work, at 9.30 in the evening.

He came up from Bristol and dined at Paddington, excited but full of quiet certainty and great hope. After dinner he stood and watched the engines. They were always his refuge, his elixir for the tired spirit, the opiate of his jaded brain, They steamed and hissed gently, some against the buffers at the near end of the platforms grey with a journey's soot and grease, breathing deeply with their task accomplished : others far out down the long platforms facing the sea of night, full of eyes of red and green, preparing in the shadows for hours of majestic, unseen progress throngh the darkness. Dawn would receive them in grey northern capitals ; in Wales or Cornwall they would give up their passengers and retire into sidings. And he—perhaps he that night would speed west again to Bristol, a real man with a real job again, to join his wife in triumph. He turned and went out of the station, hailed a taxi and got in. It was a quarter past nine, the house was not ten minutes' drive. He sat inside thinking of nothing. The taxi drew up for a minute waiting to cross Oxford Street. Suddenly Peter saw a stream of gleaming windows pour down across his vision falling from right to left. A terrible thunder felled in his ears and he saw fire spring out and twisted rails and the hideous heap of the wrecked coaches under the viaduct. Three coedits; hung suspended, full of writhing people like worms in a furnace.

He leapt from the taxi, looked wildly round, leapt- in again. IIe shouted to the man, and the man did not hear and opened the door to ask.

" The Morning Sun office, You dolt,"' shouted Peter. " 810 Fleet Street—hell for leather I "' The man 'turned the cab and drove for Fleet Street,

One thought and one thought only possessed Peter. After three long years of rigid suppression, all his news sense was awake. There was only one thing for it. It was near Ply- mouth ; the local man must motor out and get the names and facts ; he himself would supply the vivid details, the eye- witness's picture. At least 100 must have been killed, possibly more. If they did not telephone at once, the local man, who was a journalist, would go home to bed, and they would get no story.

-In-the office he struggled and fought. They would not be- lieve him. He knew no agency report would conic through till it was too late for the paper to get its own story, and the railway would issue no statement for a long time. There was only his own word,-his burning frightful knowledge . . . . He did not know that he looked like a madman and swore like a trooper. He:could not say where it was, but it was a big viaduct near Plymouth: The night news man stared at him. He remem- bered -Peter's sacking but had never known Peter. He granted and rang up the Editor. The Editor was out, down at the House. He shrugged his shoulders.