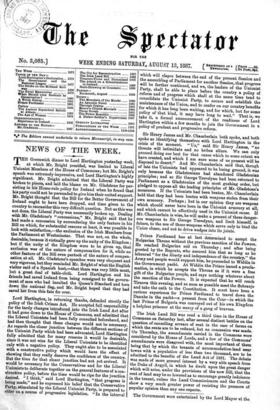 THE Greenwich dinner to Lord Hartington yesterday week, at which Mr. Bright presided, was limited to Liberal Unionist Members of the House of Commons; but Mr. Bright's speech was extremely impressive, and Lord Hartington's highly significant. Mr. Bright admitted that the Liberal Party was broken to pieces, and laid the blame on Mr. Gladstone for per- sisting in his Home-rule policy for Ireland when he found that his party could not be persuaded to give him their united support. Mr. Bright thought that the Bill for the Better Government of Ireland ought to have been dropped, and time given to the country to reconsider this very difficult question. But as this was not done, the Liberal Party was necessarily broken up. Dealing with Mr. Gladstone's "concessions," Mr. Bright said that he had made a concession by surrendering the only feature in his Bill on which, for substantial reasons at least, it was possible to look with satisfaction,—the exclusion of the Irish Members from the Parliament at Westminster. That was not, on the whole, desirable, because it virtually gave up the unity of the Kingdom ; but if the unity of the Kingdom were to be given up, that exclusion was of the nature of compensation for it, while no other feature of the Bill even partook of the nature of compen- sation at all. Mr. Gladstone's speeches were very eloquent and very vigorous, but they reminded Mr. Bright of what the English visitor said of a Spanish host,—that there was very little meat, but a great deal of table-cloth. Lord Hartington and his friends had saved Ireland from being consigned to the govern- ment of men who had insulted the Queen's Standard and torn down the national flag, and Mr. Bright hoped that they had saved her from this fate for ever.