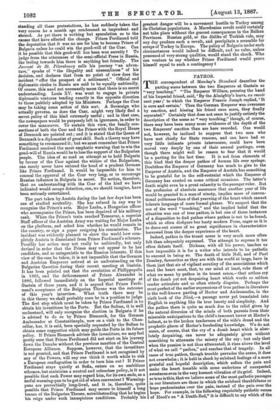 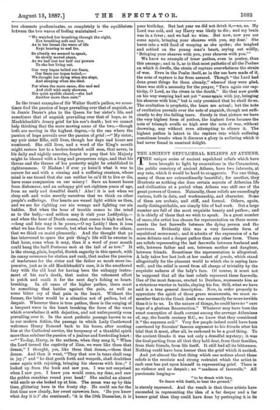 THE correspondent of Monday's Standard describes the parting scene between the two Emperors at Gastein as "very touching." "The Emperor William, pressing the hand of his Imperial friend, said, 'By the Almighty's leave, an rouoir next year;' to which the Emperor Francis Joseph replied, ' It is sure and certain.' Then the German Emperor was overcome by emotion, and kissing his friend once more, they finally separated." Certainly that does not seem to justify entirely the description of the scene as "very touching," though, of course, there may have been many more evidences of the depth of the two Emperors' emotion than are here recorded. One would not, however, be inclined to suppose that two men who have met chiefly for State reasons, and can have had so very little intimate private intercourse, could have been moved very deeply by one of their annual partings, even though there might well be reason to fear that it would be a parting for the last time. It is not from elements of this kind that the deeper pathos of human life ever springs. Doubtless the Emperor of Germany has much to give to the Emperor of Austria, and the Emperor of Austria has something to be grateful for in the self-restraint which the Emperor of Germany has exerted on some critical occasions. The latter's death might even be a great calamity to the younger ruler. But the profession of absolute assurance that another year of life would he granted to a man of ninety, implies more of conven- tional politeness than of that yearning of the heart which cannot tolerate language of mere formal phrase. We suspect that the use of the word "touching," and the implied belief that the situation was one of true pathos, is but one of those instances of a disposition to find pathos where pathos is not to be found, which so often disfigure bur hasty modern Press, eager as it is to dress-out scenes of no great :significance in characteristics borrowed from the deeper experience of the heart.

Indeed, pathos in the truest sense is very much more often felt than adequately expressed. The attempt to express it too often defeats itself. Dickens, with all his power, teaches us how impossible it is for a writer who intends to be pathetic to succeed in being so. The death of little Nell, and of Paul Dombey, favourites as they are with the world at large, have in them just that air of vigilant scrutiny of the associations which rend the heart most, that, to our mind at least, robs them of what we mean by pathos in its truest sense,—that artless cry of the dumb yet not despairing heart which words so seldom render articulate and so often utterly disguise. Perhaps the most perfect of the earlier expressions of true pathos in literature is the well-known parting of Hector and Andromache, in the sixth book of the Iliad,—a passage never yet translated into English in anything like its true beauty and simplicity. And the pathos there is quite as much due to the relief given by the natural diversion of the minds of both parents from their miserable anticipations to the child's innocent terror at Hector's helmet, as to the broken tenderness of the wife's dread and the prophetic gloom of Efector'e foreboding knowledge. We do not mean, of course, that the cry of a dumb heart which is abso- lutely despairing, can never be adequately given without something to attenuate the misery of the cry: but only that when the passion is not thus attenuated, it rises above the level of what we call "pathos," and reaches that of tragedy. In all cases of true pathos, though trouble pervades the scene, it does not overwhelm ; it is held in check by subdued feelings of a more grateful and hopeful description, which soften the pain and make the heart tremble with some undertone of unexpected sweetness even in the very keenest vibration of its grief. Indeed, so true is this, that we believe some of the most pathetic passages in our literature are those in which the subdued thankfulness or hope predominates over the pain, instead of the pain over the hope. For example, in the following exquisitely pathetic verses of Hood's on "A Death-Bed," it is difficult to any which of the two elements predominates, so completely is the equilibrium between the two waves of feeling maintained :—

"We watched her breathing through the night,

Her breathing soft and low, As in her breast the wave of life Kept heaving to and fro.

So silently we seemed to speak, So slowly moved about., As we had lent her half our powers To eke her living out.

For when the more came, dim and sad And chill with early showers, Her quiet eyelids closed,—she had Another morn than ours."

In the truest examples of Sir Walter Scott's pathos, we some- times find the passion of hope prevailing over that of anguish, as in Jeanie Deans's plea to the Queen for her sister's life, and sometimes that of anguish prevailing over that of hope, as in Mucklebackit's dreary grief for his son's death; but we cannot help Woking that the more moving scene of the two,—though both are moving in the highest degree,—is the one where the passion of hope prevails over the passion of grief:—" My sister, my pair sister Effie, still lives, though her days and hours are numbered. She still lives, and a word of the King's month might restore her to a broken-hearted auld man, that never, in Isis daily and nightly exercise, forgot to pray that his Majesty might be blessed with a long and prosperous reign, and that his throne and the throne of his posterity might be established in righteousness. 0 Madam ! if ever ye kenn'd what it was to sorrow for and with a sinning and a suffering creature, whose mind is sae tossed that she can neither be ca'd fit to live or die, have some compassion on our misery! Save an honest house from dishonour, and an unhappy girl not eighteen years of age, from an early and dreadful death ! Alas ! it is not when we sleep soft and wake merrily ourselves that we think on other people's sufferings. Our hearts are waxed light within us then, and we are for righting our am n wrangs and fighting our amn battles. But when the hour of trouble comes to the mind as to the body,—and seldom may it visit your Leddyship,— and when the hour of Death comes, that comes to high and low, —long and late may it be yonrs,-0 my Leddy ! then it isna what we has dune for onrsels, but what we has done for others, that we think on maist pleasantly. And the thought that ye hae intervened to spare the puir thing's life will be sweeter in that hour, come when it may, than if a word of your mouth could hang the haill Porteous mob at the tail of ae tow." It is the strong, plain, hopeful, Scotch sagacity in this speech, with its canny reverence for station and rank, that makes the passion of tenderness for the sister and the father so much more im- pressive, just as in old Mucklebackit's case, it is the smothered fury with the old boat for having been the unhappy instru- ment of his son's death, that makes the vehement effort to patch and caulk it for the next day's fishing so heart- breaking. In all cases of the higher pathos, there must be something that battles against the pain, as well as some bitter cry of that pain in the heart. Without the former, the latter would be a situation not of pathos, but of despair. Wherever there is true pathos, there is the surging of a buoyant wave in the heart breaking the force of the wave which overwhelms it with dejection, and not unfrequently even prevailing over it. In the most pathetic passage known to us in our modern fiction, the passage in which Lady Castlewood welcomes Henry Esmond back to his home, after meeting him at the Cathedral service, the buoyancy of a thankful spirit more than subdues the passion of a jealous and foreboding heart —" To-day, Harry, in the anthem, when they sang it, "When the Lord turned the captivity of Zion, we were like them that dream," I thought, yes, like them that dream,—them that dream. And then it went, "They that sow in tears shall reap in joy ;" and "he that goeth forth and weepeth, shall doubtless come again with rejoicing, bringing his sheaves with him ;" I looked up from the book and saw you. I was not surprised when I saw you. I knew you would come, my dear, and saw the golden sunshine round your head.' She smiled an almost wild smile as she looked up at him. The moon was up by this time, glittering keen in the frosty sky. He could see for the first time now clearly, her sweet careworn face. 'Do you know what day it is ?' she continued; 'it is the 29th December, it is

We know no example of truer pathos, even in poetry, than this passage ; and in it, as in that most pathetic' of all the Psalms on which it dwells, the strain of rapture overwhelmns the strain of woe. Even in the Psalm itself, as in the use here made ef it; the note of rapture is far from assured. Though "the Lord had done great things for them already," whereof they were glad, there was still a necessity for the prayer, "Tarn again one cap- tivity, 0 Lord, as the rivers in the South." He that now goeth on his way weeping had not yet "come again with joy, bringing his sheaves with him," but is only promised that be shall do so. The exultation is prophetic, the tears are actual; but the note of exultation prevails over the note of anguish, though not suffi- ciently to dry the falling tears. Surely in that picture we have the very highest form of pathos, the highest form because the note of triumph swells so high over the note of woe, without drowning, nay without even attempting to silence it. The highest pathos is latent in the rapture into which suffering sometimes breaks when it discerns a glory in suffering which it had never found in unmixed delight.