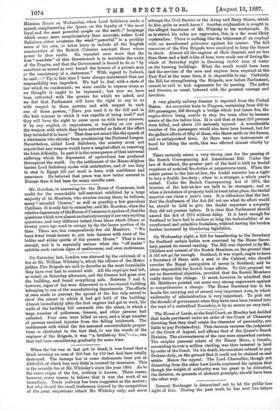 On Saturday last, London was alarmed by the outbreak of

a fire at Mr. William Whiteley's, which the officers of the Metro- politan Fire Brigade are said to describe as the most formidable they have ever had to contend with. All the employea had left, as usual, on Saturday afternoon, and the firemen had gone over the building, and found everything safe. Between 7 and 8, however, signs of fire were discovered in a five-storied building belonging to one of the manufacturing departments. The efforts at once made to prevent the spread of the fire only served to show the extent to which it had got hold of the building. Almost immediately after the first engines had got to work, the walls of the building fell outwards into the street, in which a large number of policemen, firemen, and other persons had collected. Four men were killed at once, and a large number of persons received injuries from the falling brickwork. The suddenness with which the fire assumed uncontrollable propor- tions is attributed to the fact that, to use the words of the engineer of the Brigade, it was "a bottled-up fire,"—.e., one that had been smouldering gradually for some time.