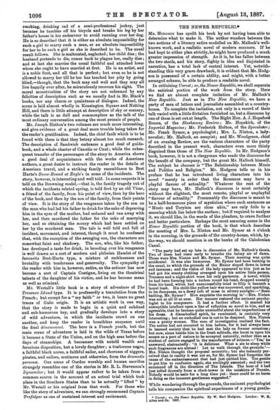 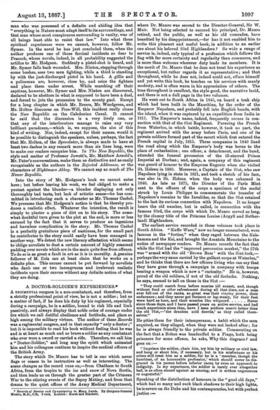 THE NEWER REPUBLIC" Ma. HODGSON has spoilt his book by

not having been able to determine what to make it. The author wanders between the two notions of a literary satire modelled on Mr. Mallock's well- known work, and a realistic novel of modern manners. If be had kept to either plan strictly, he might have produced a much greater impression of strength. As it is, he has fallen between the two stools, and his story, flighty in idea and disjointed in narration, has a total lack of central interest. Yet, notwith- standing this very grave drawback, it is evident that Mr. Hodg- son is possessed of a certain ability, and might, with a better arranged scheme, be able to produce a readable novel.

In criticising Unrest; or, the Newer Republic, we shall separate the satirical portion of the work from the story. Here we find an almost complete imitation of Mr. Mallock's New Republic. Just as in The New Republic, we have a party of men of letters and journalists assembled at a country. house. To complete the imitation, not only is a record of their talk varied with a little flirtation furnished us, but a discourse by one of them is set out at length. The Right Hon. A. J. Hopeford Breere, of the Slashaway Review ; Mr. Hopekirk, of the Imperial Magazine ; Mr. Frederick Holton, of the Speculator; Mr. Frank Symer, a psychologist; Mrs. L. Ninton, a lady. novelist; Mr. Hallock, an essayist; and Mr. Woodgreen, chief of an evening Review, are the various characters of the party described in the present work, characters even more thinly disguised than those of The New Republic. In Mr. Hodgson's book, however, it is not a clergyman who reads the discourse for the benefit of the company, but the great Mr. Hallock himself. The subject he chooses is "The Relationship between Music and Politics and Religion." Mr. Hodgson tells us in his preface that he has introduced living characters into his novel "merely in order that the Romance may have a playful flavour of actuality." Whatever the rest of the story may have, Mr. Hallock's discourse is most certainly without the slightest, the most remote, playful or unplayfrd "flavour of actuality." Presumably the discourse is meant to be a half-humorous piece of mysticism where such sentences as "Music and Toryism are close akin," are only foils to a meaning which lies below the surface; but if required to analyse it, we should like, in the words of the pleaders, to crave further and better particulars. Iterhaps the most amusing scene in the Newer Republic portion of the book, is that which describes the meeting of Mrs. L. Ninton and Mr. Symer at 4 o'clock in the morning, in the grounds of the country-how, which, by- the-way, we should mention is on the banks of the Caledonian Canal.

"The party had sat up late in discussion of Mr. Hallock's thesis. Two of them had risen early to breathe the balmy air of dawn. Those were Mrs. Hinton and Mr. Symer. Their meeting was quite accidental. It was also humorous. Mr. Symor had been bathing in the canal, to which the grounds of the Manor sloped down in lawns and terraces ; and the vision of the lady appeared to him just as he had got his scanty clothing arranged upon his active little person. Trousers and a night-shirt were his only garments. A towel, which he had been forming into a turban round his head, dropped uneasily from his hand, which had unsuccessfally tried to fillip it beneath a laurel bush. His child-like yellow hair was uncovered, and sparkling, in its dampness, as a dewy tuft of moss in silvery eunlight.—' Been bathing, Mr. Symer P How exquisite the morning Ninton was not at all ill at ease. Her manner restored the eminent psycho- logist to his composure. It had a further effect. It started his susceptible intellect upon a line of reflection so novel to him, and so agreeable, that he became quite unmindful about the imperfections of his dregs. A disembodied spirit, he ruminated, is certainly very interesting ; but an embodied one is not to be despised. Mrs. Nintoa was a pretty woman. The man of investigation realised the fact. The notion had not occurred to him before, for it had always been in learned society that he had met the lady on former occasions ; but now, alone beside him in the fresh solitude, she burst in upon his senses as a part of nature to be [tempted naturally, rather than as a student of nature engaged in the manufacture of soienoe.—` Yes,' he answered, abstractedly : it is delicious What a sin to sleep while such fragrances are abroad ! Let us walk through the grounds.'— Mrs. Winton thought the proposal eccentric ; but she instantly per- ceived that in reality it was not so, for Mr. Symer bad forgotten the cause of the embarrassment that had just quitted him. Too gentle to put him to confusion again, she smilingly assented ; and the two sauntered off in the direction of The Islands. The hour of 4 had just tolled drowsily from a alock4ower in the outskirts of Danain. Nobody would be astir for a long time yet there could be no harm in doing as the innocent gentleman suggested."

While wandering through the grounds, the eminent psychologist tells his companion the spiritual experiences of a young gentle- • 17nrest ; or, the Newer Republic. By W. Burl Hodgeon. London W. H. Allen sod 0o. 1887. man who was possessed of a definite and abiding idea that " everything in Nature must adapt itself to its surroundings, and that man whose most conspicuous surrounding is vanity, was of all beings least able to resist that law." Into what these spiritual experiences were we cannot, however, follow Mr. Symer. In the novel he has just concluded them, when the author produces one of those farcical incidents so dear to Peacock, whose novels, indeed, in all probability suggested the artifice to Mr. Hodgson. Suddenly a pistol-shot is heard, and Mr. Symer falls back wounded. Mrs. Ninton, stepping through some bushes, sees two men fighting, while a third is standing by with the just-discharged pistol in his hand. A gillie and a policeman are, however, close by, and seize the fighters and place them tinder arrest. While marching off their captives, however, Mr. Symer and Mrs. Ninton are discovered, declared to be abettors in what is supposed to have been a duel, and forced to join the procession to the county gaol. Except for a long chapter in which Mr. Breere, Mr. Woodgreen, and Mr. Holton discourse on Free-Will, this incident really closes the New Republic on the Caledonian Canal. It cannot be said that the discussion is a very lively one, or that any of the interlocutors manage to rani' e any very brilliant paradoxes,—which is, we suppose, the aim of this kind of writing. Nor, indeed, except for their names, would it be possible to distinguish the speakers, unless, perhaps, the fact that Mr. Holton, of the Speculator, is always made to have at least two dashes in any remark more than six lines long, were to make our readers recognise him. In The New Republic, the style and matter of Professor Jowett's, Mr. Matthew Arnold's, Mr. Pater's conversations, make them as distinctive and as easily recognisable as the anthers in the Rejected Addresses, or the characters of Nightmare Abbey. We cannot say as much of The Newer Republic.

Into the story of Mr. Hodgson's book we cannot enter here ; but before leaving his work, we feel obliged to make a protest against the blunder—a blunder displaying not only thoroughly bad taste, but lack of artistic sense—he has com- mitted in introducing such a character as Mr. Thomas Cashel. We presume that Mr. Hodgson's notion is that he thereby pro- duces a realistic effect. Whatever the intention, the result is simply to plaster a piece of dirt on to his story. The some- what doubtful turn given to the plot at the end, is more or less exoused by the fact that it serves to produce an ingenious and harmless complication in the story. Mr. Thomas Cashel is a perfectly gratuitous piece of nastiness, for the small part Its contributes to the story could easily have been managed in another way. We detest the new literary affectation which seems to -oblige novelists to dust a certain amount of highly seasoned padding over novels which are in the main quite free from offence. To do so is as great a fault in art as it is in morality. A genuine follower of M. Zola can at least claim that he works on a definite plan. This excuse cannot be put forward by novelists who daub one or two incongruous and irrelevant realistic incidents upon their canvas without any definite notion of what they are doing.