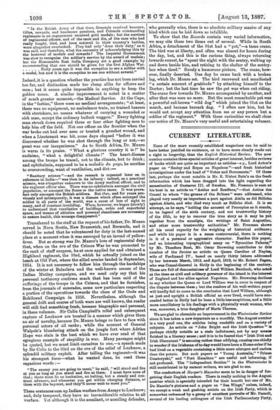 None of the more recently established magazines can be said to have better justified its existence, or to have more clearly made oat a right to longevity, than the English Historical Review. The new number contains three special articles of great interest, besides reviews

of books which. are quite as important as articles—e.g., Lord Acton's paper on "Seeley and Ropes on Napokon"—and fresh historical investigations under the bead of "Notes and Documents." Of these last, perhaps the most notable is Mr. R. Nisbet Bale's on the fresh information which has been dragged into the light regarding the assassination of Gustavus III. of Sweden. Mr. Freeman is seen at

his best in an article on "Aatius and Bondace,"—that Aetius the Conant to whom "the groans of the Britons" were addressed, who

played very nearly as important a part against Attila as did Stilicho against Alaric, and who died very much as Stilicho died. It is tur attempt, as he sap, "holding the account of Pr000pins as it stands, to be legend of the sixth century, and not trustworthy history of the fifth, to try to recover the true story as it may be put together from the annalipts, the writings of Saint Augustine, and other more trustworthy authorities." Mr. Freeman shows all his usual capacity for the weighing of historical evidence; and while his paper is in a sense controversial, there is nothing in it of a personal or aggressive character. Besides this paper, and an interesting topographical essay on "Byzantine Palaces," by Mr. Theodore Bent, Mr. Oscar Browning contributes to this number of the Review an article on Queen Caroline of Naples, wife of Ferdinand IV., based on nearly thirty letters addressed by her between March, 1812, and April, 1813, to Mr. Robert Fagan, who was Consul-General in Sicily in the beginning of the century. These are fall of denunciations of Lord William Bentinck, who acted at the time as civil and military governor of the island in the interest of England and her allies against Napoleon. Mr. Browning declines to say whether the Queen or Lord William was in error in respect of the dispute between these; but the readers of his well-written paper will hardly fail to come to the conclusion that Lord William, although as just and upright a British official as ever lived, would have suc- ceeded better in Sicily bad he been a little less suspicious, and a little more conciliatory in his deaTuage with a physically weak woman, who was, moreover, a true daughter of Maria Theresa.