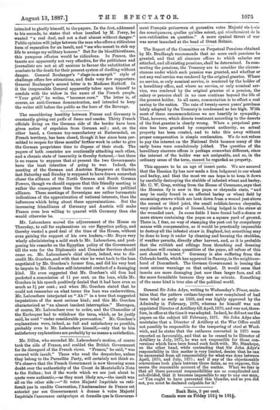 that the pattern cutlass-bayonet now complained of had been tried as early as 1869, and was highly approved by the Admiralty in February, 1870, whereas he himself was not appointed Director of Artillery till April, 1870, and was not, there- fore, in office at the time it was adopted. Indeed, he did not see the papers on the subject till February, 1871. Sir John Adye also maintains that a Director of Artillery at the War Office could not possibly be responsible for the tempering of steel at Wool- wich, and he states that the cutlasses converted in 1875 were reported on favourably, and that as he ceased to be Director of Artillery in July, 1875, he was not responsible for those con- versions which have been found such fault with. Mr. Stanhope, on the other hand, while contending that Sir John Adye's responsibility in this matter is very limited, denies that he 0811 be exonerated from all responsibility for what was done between April, 1870, and July, 1875; and if any of the objectionable conversions took place between those dates, as we suppose, this seems the reasonable account of the matter. What we fear is- that all these personal responsibilities are so complicated and sub.divided, that it becomes impossible to say to any one man.

You ought to have prevented this blunder, and as you did. not, you must be declared culpable for it.' '