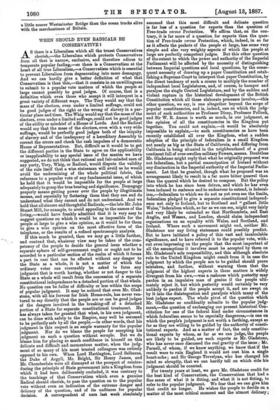 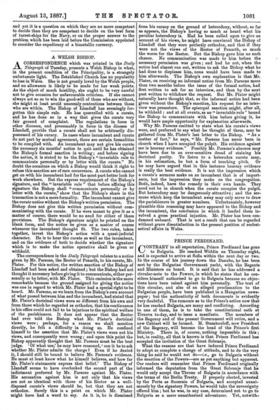 Page 8, 13 August 1887 — WHEN SHOULD EVEN RADICALS BE correct the errors and cheek
Close

WHEN SHOULD EVEN RADICALS BE correct the errors and cheek

AS there is a Liberalism which all the truest Conservatives simple and also very weighty aspects of which the people at cherish,—the Liberalism which protects Conservatives large are perfectly competent judges. But this other question from all that is narrow, exclusive, and therefore odious to of the extent to which the power and authority of the Imperial temperate popular feeling,--so there is a Conservatism at the Parliament will be affected by the necessity of distinguishing heart of all true Liberalism,—a Conservatism which is essential between Imperial questions and local questions, by the conse- to prevent Liberalism from degenerating into mere demagogy. quent necessity of drawing up a paper Constitution and estab- And we can hardly give a better definition of what that lishing a Supreme Court to interpret that paper Constitution, by Conservatism is than this,—that it consists in an unwillingness the direct tendency of such a course to multiply the number of to submit to a popular vote matters of which the people at independent local Legislatures, and, of course, to hamper and large cannot possibly be good judges. Of course, that is a paralyse the single Central Legislature, and by the sudden and definition which even those who accept it will interpret in a violent rupture in the historical development of the British great variety of different ways. The Tory would say that the Constitution which all these elaborate processes involve,—this mass of the electors, even under a limited suffrage, could not other question, we say, is one altogether beyond the scope of be good judges of the right or the wrong of slavery in a par- popular constituencies, and is, indeed, one on which the judg- ticular place and time. The Whig would say that the mass of the ment of such authorities as Professor Dicey, Professor Pollock, electors, even under a limited suffrage, could not be good judges and Sir W. R. Anson is worth as much, in our judgment, as of the utility or mischief of a House of Lords. And the Radical the opinion of all the constituencies in the Kingdom put would say that the mass of the electors, even with a very wide together. You could not explain,—it would be absolutely suffrage, would be perfectly good judges both of the iniquity impossible to explain,—to such constituencies as have been of slavery and of the inadequacy of a hereditary Assembly to recently established all over the Kingdom, what a sudden