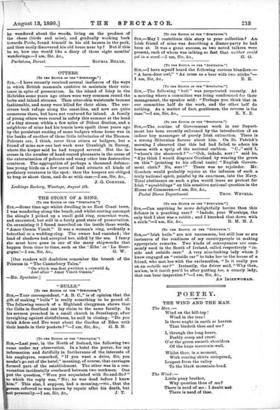 SIR,—I have recently received several instances of the ways in which British mammals contrive to maintain their exis- tence in spite of persecution. In the island of Islay in the Hebrides some years ago otters were very common round the lochs and inland streams. Then otter-skin waistcoats became fashionable, and many were killed for their skins. The sur- vivors took refuge along the coast-line, and now are quite numerous there, but have not ventured far inland. A family of young otters were reared in safety this summer at the head of a tiny stream within a few miles of Didcot Station, and a neighbour of mine had his tennis lawn spoilt three years ago by the persistent rooting of some badgers whose home was in the banks of another of these little tributaries of the Thames. Polecats are, I think, rarer than otters or badgers, but a friend of mine saw one last week near Cranleigh in Surrey, where the keeper said he had trapped several. But the in- crease in the number of hand-reared pheasants is the cause of the extermination of polecats and many other less destructive creatures. The aggregation of perhaps a thousand defence- less young birds on a few acres of land attracts all kinds of predatory creatures to the spot : then the keepers are obliged to trap or shoot them, and do so with ease.—I am, Sir, &c.,