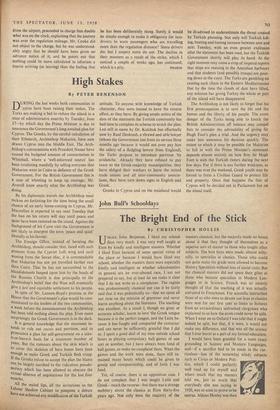 By PETER BENENSON DURING the last weeks both communities in Cyprus have been raising their stakes. The Turks are making a bid to reduce the island to a state of administrative anarchy by Tuesday, June 17—by which day the Prime Minister is due to announce the Government's long-awaited plan for Cyprus. The Greeks, by the careful calculation of their Ethnarch, Archbishop Makarios, have now drawn Cyprus into the Middle East. The Arch- bishop's conversations with President Nasser have caused the budgeted amount of consternation in Whitehall, where a 'well-informed source' has been retaliating manfully by telling everyone that Makarios went to Cairo in defiance of the Greek Government. For the British Government this is a case of whistling to keep up courage; Mr. Averoff knew exactly what the Archbishop was doing.

By his diplomatic travels the Archbishop must reckon on forfeiting for the time being the small chance of an early home-coming to Cyprus. Mr. Macmillan is expected to say next Tuesday that the ban on his return will stay until peace and quiet have been restored on the island. Against the background of his Cairo visit the Government is not likely to interpret the term `peace and quiet' liberally in his favour.

The Foreign Office, instead of berating the Archbishop, should consider that, faced with such pressure from the Cypriot Left wing and such Wooing from the Soviet bloc, it is commendable that Makarios has not yet travelled farther east than Cairo. That he has not succumbed to the blandishments heaped upon him by the heads of the Russian Church is due principally to the Archbishop's belief that the West will eventually give a just and equitable settlement to his people.

In spite of Mr. Lennox-Boyd's promise in the House that the Government's plan would be com- municated to the leaders of the two communities, a week before the announcement the Archbishop has been told nothing about the plan. Even more surprisingly the Greek Government is in the dark.

It is general knowledge that the statement in- tends to rule out enosis and partition, and to pronounce a plan for self-government on a take- it-or-leave-it basis for a minimum number of years. But the rumours about the skin which is to cover this skeleton of bare bones have been enough to make Greek and Turkish flesh creep. If the Greeks refuse to accept the plan the blame can be largely ascribed to the ridiculous pseudo- secrecy which has been allowed to obscure the virtual absence of negotiations for the last four months.

All the sealed lips, all the invitations to the Labour Shadow Cabinet to postpone a debate have not achieved any modification of the Turkish attitude. To anyone with knowledge of Turkish character, they were bound to have the reverse effect, as they have. By giving ample notice of the date of the statement the Turkish community has had time to complete its scheme to wreck the plan. Led still in name by Dr. Kutchuk but effectually now by Rauf Denktash, a shrewd and able lawyer (whom the Government lost from its service three months ago because it would not even pay him the salary of a fledgling lawyer from England), the Turks propose to introduce partition `by avalanche.' Already they have refused to pay taxes to the Greek-majority municipalities, they have obliged their workers to leave the mixed trade unions and all inter-community associa- tions, they have torn down signs in English and Greek.

Greeks in Cyprus and on the mainland would be ill-advised to underestimate the threat created by Turkish planning. Not only will Turkish kill- ing, beating and looting increase between now and next Tuesday, with an even greater explosion after the'statement has been read, but the Turkish Government shortly will play its hand. At the right moment may come a crop of inspired reports that ships are massing in the Anatolian harbours and that students (and possibly troops) are pour- ing down to the coast. The Turks are gambling on causing such chaos in the Eastern Mediterranean that by the time the clouds of dust have lifted, any solution bar giving Turkey the whole or part of the island will have disappeared.

The Archbishop is not likely to forget that his first preoccupation is to save the life and the homes and the liberty of his people. The acute danger of the Turks being able to knock the British Administration off balance may compel him to consider the advisability of giving Sir Hugh Foot's plan a trial. And, the urgency may make him announce his decision quickly. The extent to which it may be possible for Makarios to fall in with the Prime Minister's statement depends almost entirely on how firm Sir Hugh Foot is with the Turkish rioters during the next few days. For if there is any further weakness, as there was over the weekend, Greek youth may be forced to form a Civilian Guard to protect life and property. Once that happens the fate of Cyprus will be decided not in Parliament but on the island itself.