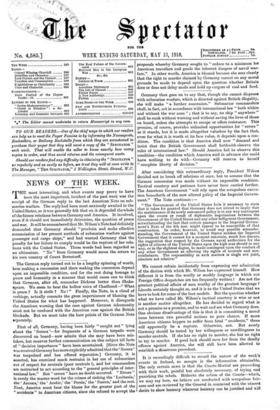 It is exceedingly difficult to record the nature of the

week's events in Ireland, so meagre is the information obtainable. The only certain news is that the Courts-Martial are proceeding with their work, painful but absolutely necessary, of trying and punishing the rebels. Hitherto the action of the Courts—which, we may say here, we believe are conducted with scrupulous fair. ness and are reviewed by the General in command with the utmost desire to show leniency wherever leniency can be justified and will not imperil the safety of the State—has been concerned with the leaders, and therefore, as was necessarily the case, clemency has proved difficult. We do not doubt, however, that in the case of the rank-and-file, deluded into .acts of cold-blooded murder by their chiefs, the maximum of leniency consistent with reason and common- sense will be exhibited.