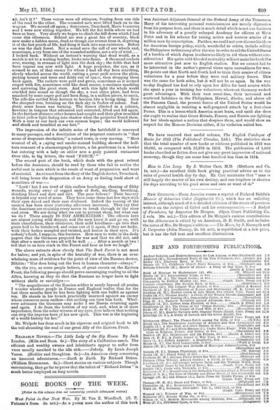 was Assistant-Adjutant-General of the Federal Army of the Tennessee. Many of his interesting personal reminiscences are merely digressive from his purpose here, and there is much detail which is not our business in his advocacy of a greatly enlarged Academy for officers at West Point and in his scheme for raising active and reserve armies of a million men by conscription. Further, we could not now discuss his ideas for American foreign policy, which, wonderful to relate, include selling the Philippines to Germany after the war in order to rid the United States of a burden of which Japan is otherwise likely to rid them without con- sideration I His quite cold-blooded neutrality will not make his book the more attractive just now to English readers. But we cannot fail to be interested in the author's general views upon unreadiness Mr -war. He points out that North and South had to train their armies of citizen volunteers for a year before they were real military forces. This was the same for both sides, but it will not be so again. In the war to-day England has had to rely upon her Allies for land armies while she spent a_year in training her volunteers, whereout Germany sucked great advantages. With their vast coast-line,. their increased and scattered liabilities in the Philippines, Hawaii, Alaska, and above all the Panama Canal, the present forces of the United States would be almost negligible in resisting a well-prepared attack by a first-class Power. This is a lesson which America must learn, and until she dbes she ought to realize that Great Britain, France, and Russia are fighting for her ideals against a, nation that despises them, and would show no respect for the Monroe Doctrine either, if its violation suited her.