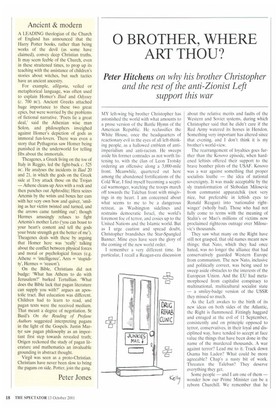 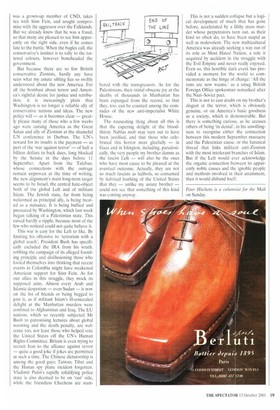 O BROTHER, WHERE ART THOU?

Peter Hitch ens on why his brother Christopher

and the rest of the anti-Zionist Left support this war

MY left-wing big brother Christopher has astonished the world with what amounts to a prose version of the Battle Hymn of the American Republic. He reclassifies the White House, once the headquarters of reactionary evil in the eyes of all left-thinking people, as a hallowed emblem of antiimperialism and anti-racism. He sweeps aside his former comrades as not worth listening to, with the élan of Leon Trotsky ordering an offensive along a 3,000-mile front. Meanwhile, quartered out here among the abandoned fortifications of the Cold War, I find myself becoming a sceptical warmonger, watching the troops march off towards the Taleban front with misgivings in my heart. I am concerned about what seems to me to be a dangerous retreat, as Washington sidelines and restrains democratic Israel, the world's foremost foe of terror, and cosies up to the United Nations and the Islamic world. But as I urge caution and spread doubt, Christopher brandishes the Star-Spangled Banner. Mine eyes have seen the glory of the coming of the new world order.

I remember a very different time. In particular, I recall a Reagan-era discussion about the relative merits and faults of the Western and Soviet systems, during which Christopher said that he didn't care if the Red Army watered its horses in Hendon. Something very important has altered since that evening, and I don't think it is my brother's world-view.

The rearrangement of loyalties goes further than the Kosovo episode, when hardened leftists offered their support to the brave bomber pilots of the USAF. Kosovo was a war against something that proper socialists loathe — the idea of national sovereignty. It was made acceptable by the sly transformation of Slobodan Milosevic from communist apparatchik (not very nice, but preferable in leftish eyes to Ronald Reagan) into 'nationalist rightwinger' (wholly bad). Those who had not fully come to terms with the meaning of Stalin's or Mao's millions of victims now proclaimed righteous outrage over Milosevic's thousands.

They saw what many on the Right have still not grasped, that old names meant new things; that Nato, which they had once hated, was no longer the alliance that had conservatively guarded Western Europe from communism. The new Nato, inclusive and politically correct, was being used to sweep aside obstacles to the interests of the European Union. And the EU had metamorphosed from capitalist conspiracy to multinational, multicultural socialist state — a smiley-badge version of the USSR they missed so much.

As the Left awakes to the birth of its new ideas on both sides of the Atlantic, the Right is flummoxed. Fittingly haggard and enraged at the evil of 11 September, consistently and on principle opposed to terror, conservatives, in their loyal and disciplined way, have tended to accept at face value the things that have been done in the name of the murdered thousands. A war against terror? Lead me to it. Track down Osama bin Laden? What could be more agreeable? Chap's a nasty bit of work. Threaten the Taleban? They deserve everything they get.

Some people — and I am one of them — wonder how our Prime Minister can be a reborn Churchill. We remember that he was a grown-up member of CND, takes tea with Sinn Fein, and sought compromise with the aggressor over the Falklands. But we already knew that he was a fraud, so that many are pleased to see him apparently on the right side, even if he comes late to the battle. When the bugles call, the conservative's instinct is to rally to the tattered colours, however boneheaded the government.

But because there are so few British conservative Zionists, hardly any have seen what my astute sibling has so swiftly understood about the new America. For all the bombast about terror and America's rightful desire for justice and retribution, it is increasingly plain that Washington is no longer a reliable ally of conservative nations and ideas. The new policy will — as it becomes clear — greatly please many of those who a few weeks ago were cursing America as the Great Satan and ally of Zionism at the shameful UN conference in Durban. The UN's reward for its insults is the payment — as part of the 'war against terror' — of half a billion dollars in back dues, long blocked by the Senate in the days before 11 September. Apart from the Taleban, whose connections with the outrage remain unproven at the time of writing, the new alignment's main long-term target seems to be Israel, the central hate-object both of the global Left and of militant Islam. The Jewish state, far from being welcomed as principal ally, is being treated as a nuisance. It is being bullied and pressured by Washington, which last week began talking of a Palestinian state. This raised hardly a ripple, because most of the few who noticed could not quite believe it.

This war is easy for the Left to like. By limiting his offensive to 'terrorism with a global reach', President Bush has specifically excluded the IRA from his wrath, robbing the campaign of its alleged founding principle and disillusioning those who fooled themselves into thinking that recent events in Colombia might have weakened American support for Sinn Fein. As for our allies in this struggle, they mock its supposed aims. Almost every Arab and Islamic despotism — even Sudan — is now on the list of friends or being begged to join it, as if militant Islam's ill-concealed delight at the Manhattan murders were confined to Afghanistan and Iraq. The EU nations, which so recently subjected Mr Bush to patronising lectures about global warming and the death penalty, are welcome too, not least those who helped vote the United States off the UN's Human Rights Committee. Britain is even trying to recruit Iran to the alliance against terror — quite a good joke if jokes are permitted at such a time. The Chinese dictatorship is among the good guys; Taiwan, Tibet and the Hunan spy plane incident forgotten. Vladimir Putin's rapidly solidifying police state is also deemed to be on 'our' side, while the friendless Chechens are num bered with the transgressors. As for the Palestinians, their initial obscene joy at the deaths of thousands in Manhattan has been expunged from the record, so that they, too, can be counted among the comrades of the new anti-imperialist White House.

The nauseating thing about all this is that the capering delight of the bloodthirsty Nablus mob may turn out to have been justified, and that those who celebrated this horror most gleefully — in Gaza and in Islington, including, paradoxically, the very people my brother damns as the fascist Left — will also be the ones who have most cause to be pleased at the eventual outcome. Actually, they are not so much fascists as halfwits, so consumed by habitual loathing of the United States that they — unlike my astute brother could not see that something of this kind was coming anyway. • This is not a sudden collapse but a logical development of much that has gone before, accelerated by a filthy mass murder whose perpetrators turn out, as their kind so often do, to have been stupid as well as malevolent. The new multicultural America was already seeking a way out of its role as Most Hated Nation, a role it acquired by accident in the struggle with the Evil Empire and never really enjoyed. Even so, this horrible dark event has provided a moment for the world to commemorate as the hinge of change: 'All the isms are now wasms,' as a smug British Foreign Office spokesman remarked after the Nazi–Soviet pact.

This is not to cast doubt on my brother's disgust at the terror, which is obviously genuine, or on America's basic goodness as a society, which is demonstrable. But there is something curious, as he accuses others of being 'in denial', in his unwillingness to recognise either the connection between this modern September massacre and the Palestinian cause, or the fanatical thread that links militant anti-Zionism with the most intolerant branches of Islam. But if the Left would ever acknowledge the organic connection between its apparently noble causes and the ignoble people and methods involved in their attainment, then it would disband itself.

Peter Hitchens is a columnist for the Mail on Sunday.