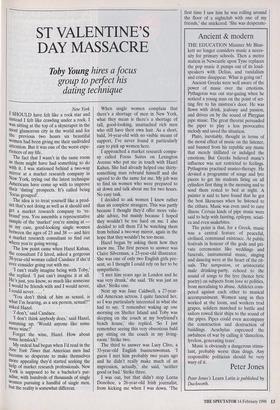 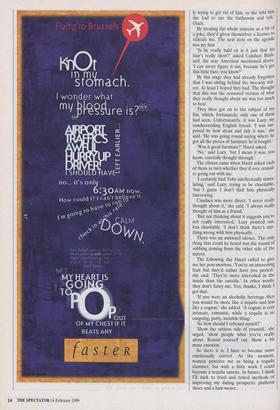 group to perfect his dating technique

New York SHOULD have felt like a rock star and instead I felt like crawling under a rock. I was sitting at the top of a skyscraper in the Most glamorous city in the world and for the previous two hours six beautiful women had been giving me their undivided attention. But it was one of the worst expe- riences of my life. The fact that I wasn't in the same room as them might have had something to do With it. I was stationed behind a two-way Mirror at a market research company in New York, trying out the latest technique Americans have come up with to improve their 'dating' prospects. It's called being focus grouped'. The idea is to treat yourself like a prod- uct that's not doing as well as it should and get a market research company to 're- brand' you. You assemble a representative Sample of the 'market' you're aiming at in my case, good-looking single women between the ages of 23 and 38 — and hire a market research consultant to find out where you're going wrong. The low point came when Hazel Kahan, the consultant I'd hired, asked a gorgeous 38-year-old woman called Candace if she'd ever consider going out with me.

`I can't really imagine being with Toby,' she replied. 'I just can't imagine it at all. He's just, you know, so much like someone I would be friends with and I would never, I could never. . . .

`You don't think of him as sexual, is what I'm hearing, as a sex person, sexual?" asked Hazel.

`I don't think anybody does,' said Hazel, summing up. 'Would anyone like some more wine?'

Forget the wine, Hazel. How about some hemlock?

My ordeal had begun when I'd read in the New York Times that American men had become so desperate to make themselves more appealing they'd started seeking the help of market research professionals. New York is supposed to be a bachelor's par- adise, with hundreds of thousands of single women pursuing a handful of single men, but the reality is somewhat different. When single women complain that there's a shortage of men in New York, what they mean is there's a shortage of tall, good-looking, unattached rich men who still have their own hair. As a short, bald, 34-year-old with no visible means of support, I've never found it particularly easy to pick up women here.

I approached a market research compa- ny called Focus Suites on Lexington Avenue who put me in touch with Hazel Kahan. She had already helped one thirty- something man rebrand himself and she agreed to do the same for me. My job was to find six women who were prepared to sit down and talk about me for two hours. No easy task.

Hazel began by asking them how they knew me. The first person to answer was Claire Silverman, a 23-year-old illustrator. She was one of only two English girls pre- sent, so I thought I could rely on her to be sympathetic.

`I met him years ago in London and he was very drunk,' she said. 'He was just an idiot.' Strike one.

Next up was Jane Caldwell, a 27-year- old American actress. I quite fancied her, so I was particularly interested in what she had to say. 'I remember waking up one morning on Shelter Island and Toby was sleeping on the couch at my boyfriend's beach house,' she replied. `So I just remember seeing this very obnoxious bald guy sitting on the couch in my living- room.' Strike two.

The third to answer was Lucy Clive, a 33-year-old English businesswoman. 'I guess I met him probably two years ago and he didn't really make much of an impression, actually,' she said, 'neither good or bad.' Strike three.

I was out, but that didn't stop Lorna Donohoe, a 26-year-old Irish journalist, from kicking me when I was down. 'The first time I saw him he was rolling around the floor of a nightclub with one of my friends,' she snickered. 'She was desperate- ly trying to get rid of him, so she told him she had to use the bathroom and left. Ouch.

By treating the whole exercise as a bit of a joke, they'd given themselves a licence to ridicule me. The next item on the agenda was my hair. `Is he really bald or is it just that his hair's really short?' asked Candace Bush- nell, the sexy American mentioned above. `I can never figure it out, because he's got this little fuzz, you know?' By this stage they had already forgotten that I was sitting behind the two-way mir- ror. At least I hoped they had. The thought that this was the censored version of what they really thought about me was too much to bear.

They then got on to the subject of my flat, which, fortunately, only one of them had seen. Unfortunately, it was Lucy, mY condescending English friend. 'I was sur- prised by how clean and tidy it was,' she said. 'He was going round saying where he got all the pieces of furniture he'd bought.'

Was it good furniture?' Hazel asked.

`No,' said Lucy, 'but I mean it was, you know, carefully thought through.' The climax came when Hazel asked each of them in turn whether they'd ever consid- er going out with me.

`I certainly find Toby intellectually stimu- lating,' said Lucy, trying to be charitable, `but I guess I don't find him physically interesting.' Candace was more direct. 'I never really thought about it,' she said. 'I always really thought of him as a friend.'

`But not thinking about it suggests you're not really interested,' Lucy pointed out, less charitably. 'I don't think there's any- thing wrong with him physically. . . . '

There was an awkward silence. The only thing that could be heard was the sound of sobbing coming from the other side of the mirror.

The following day Hazel called to give me her post-mortem. 'You're an interesting fruit but they'd rather have you peeled,' she said. 'They're more interested in the inside than the outside.' In other words, they don't fancy me. Yes, thanks, I think I got that.

`If you were an alcoholic beverage then you would be more like a tequila and less like a cognac,' she added. 'A cognac is very intimate, romantic, while a tequila is an outgoing, party, sociable thing.'

`So how should I rebrand myself?'

`Show the serious side of yourself,' she urged, 'show people what you're really about. Round yourself out. Show a bit more emotion.'

So there it is. I have to become more emotionally correct. At the moment, women perceive me as being a tequila slammer, but with a little work I could become a tequila sunrise. In future, I think I'll stick to tried and tested methods of improving my dating prospects: platform shoes and a hair-weave.