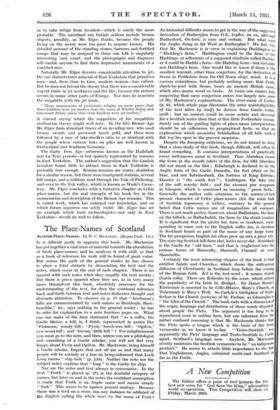 The Place-Names of Scotland Scottish Place-Names. By W. C. Mackenzie.

(Keg-an Paul. 15s.) IT is difficult justly to appraise this book. Mr. Mackenzie has got together a vast mass of material towards the elucidation of Scots place-names, and he analyses it with skill, so that as a book of reference his work will be found of great value. But across the path of the general reader he has chosen to place a fatal obstacle by dissociating the text and the notes, which occur at the end of each chapter. There is no quarrel with such notes when they amplify the text merely ; but there is grave quarrel when they are, as in very many cases throughout this book, absolutely necessary for the understanding of the text, for then the continual reference back and forth between text and notes dislocates thought and distracts attention. To observe on p. 57 that " herdsman's hills are commemorated by such names as Barnbogle, Barn- bauchlie," &c., says nothing to the general reader ; he has to refer for explanation to a note fourteen pages on. What can one make of the bare statement that " as a suffix, the Gaelic bheinn, a hill, is, I think, represented in names like Finhaven,' woody hill ; Fyvie,' beech-tree hill ; ' Ogilvie,' yew-wood hill ; and Govan,' little hill " ? For enlightenment you must go to the note, and then, unless you are a philologist and something of a Gaelic scholar, you will not feel very happy about Fyvie and Ogilvie. Mr. Mackenzie, being himself a Gaelic scholar, forgets that not all are so and that •many people will be entirely at a loss on being informed that Loch Long means " ship loch " (p. 154). Neither the note nor the subject index explains that " long " is the Gaelic for ship. Nor are the notes and text always in consonance. In the text " Forth " is placed (p. 27) in the doubtful category of names, but later on and in the notes the confident assumption is made that Forth is an Anglic name and 'means simply " ford." This seems to be against general analogy. Because there was a ford on a -river, can any instance-be adduted of - the English calling the- whole river-by the name- of Ford ? An historical difficulty seems to get in the way of the suggested derivation of Rutherglen from O.E. hryder, an ox, although Rutherford, Ox-ford, is easy and certain. But what were the Angles doing as far West as Rutherglen ?- We feel, too, that Mr. Mackenzie is in error in explaining Haddington as " Hadding's farm." Haddington could be the farm of the Haddings, or adherents of a supposed chieftain called Hadda; or it could be Hadda's farm—the Hadding farm—but certainly not Hadding's farm. One would like to know if there is the smallest warrant, other than conjecture, for the derivation of Scone in Perthshire from the Old Norse skOgr, wood. It is a curious coincidence, but probably nothing more, that Perth, cheek-by-jowl with Scone, bears an ancient British name, which also means wood or brake. At times one cannot help suspecting that mere conjecture enters too largely- into some of Mr. Mackenzie's explanations. The river-name of Luther (p. 91, which whole page illustrates the utter unintelligibility of the text taken by itself) he derives from Gaelic luthar, swift ; but no current could be more sedate and decorous for a Scottish water than that of this little Forfarshire stream. Surely one of the guiding lights of place-name interpretation should be an adherence to geographical facts, so that an explanation which associates Schiehallion of all bills with a flat top lies open to the gravest suspicion.

Despite the foregoing criticisms, - we do not intend to deny that a close study of this book, though difficult, will often be found rewarding. It contains interpretations of practically every well-known name in Scotland. Thus Aberdeen means the town at the mouth (aber) of the Don, for Old Aberdeen did not stand on the Dee ; Edinburgh is declared to be the Anglic form of the Gaelic Dunedin, the fort (dun) on the brae, and not Edwinesburh, the fortress of King Edwine ; Dundee is " the south fort " ; Linlithgow, the lake (tin) of the soft marshy field ; and the element gory reappears in Glasgow, which is construed as meaning " green fields." Generally the author calls attention to the matter-of-fact prosaic character of Celtic place-names (for the main bulk of Scottish toponomy is Celtic), contrary to the general belief that Celtic names are of imagination all compact. There is not much poetry, however, about Ballintuim, the farm on the hillock, or Ballachulish, the farm by the strait (caolas). It is significant that the prefix bal, farm or residence, corre- sponding in some sort to the English suffix ton, is nowhere in Scotland found as part of the name of any large town. The fat prosperous English ton often.grew up into a-great city. The starving Scottish hill-farm (bal, baile) never did. Seanbhaile is the Gaelic for " old farm " and that is Anglicized into the curious forms of Shanvally, Shenwell, Channel or even Shambellie.

Certainly the most interesting chapter of the book is that entitled Saints and Churches, which shows the widespread diffusion of Christianity in Scotland long before the coming of the Roman faith. Kil is the test-word ; it means church (Latin cella). There are Kilbrides by the score, which attests the popularity of the Irish St. Bridget. Sir James Barrie's Kirriemuir is asserted to be Cille-Mhuire, Mary's Church, as Tobermory is Mary's Well. So Carlyle's birthplace of Bede- fechan is the Church (ecclesia) of St. Fechan, as Gleneagles is " the Glen of the Church." The book ends with a discussion of the origin, language and distribution of those much disputed- about people the Picts. The argument is too long to be reproduced even in outline here, but one inference from the - rather confused reasoning is that Mr. Mackenzie thinks that the Picts spoke a tongue which is the basis of the Scots vernacular as we know it to-day. " Teuto-Scottish " was apparently the Picts' language and Teuto-Scottish is, Gaelic apart, Scotland's language now. Anyhow, Mr. Mackenzie stoutly maintains the Scottish vernacular to be " an indigenous product." He seems to attach little importance to the fad that Englishmen, Angles, colonized south-east Scotland as far as the Forth.