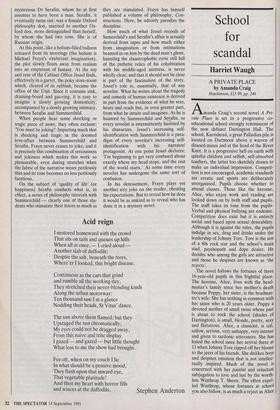 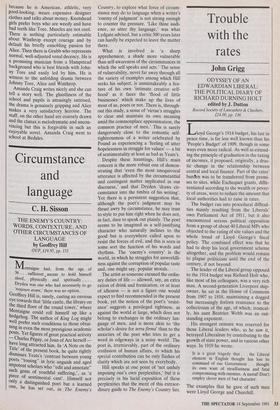 A PRIVATE PLACE by Amanda Craig Hutchinson, f13.99, pp. 246 Amanda Craig's second novel A Pri- vate Place is set in a progressive co- educational school strongly reminiscent of the now defunct Dartington Hall. The school, Knotshead, a great Palladian pile is located on Dartmoor above a warren of disused mines and at the head of the River Knot. It is a progressive hell on earth with spiteful children and selfish, self-absorbed teachers, the latter too sketchily drawn to make an individual impression. Competi- tion is not encouraged, academic standards are erratic and sports are deliberately unorganised. Pupils choose whether to attend classes. Those like the heroine, Alice, who enjoy work and reading are looked down on by both staff and pupils. The staff takes its tone from the pupils. Verbal and physical bullying are endemic. Competition does exist but it is entirely social and based upon sexual desirability. Although it is against the rules, the pupils indulge in sex, drug and drinks under the leadership of Johnny Tore. Tore is the son of a 60s rock star and the school's main stud, psychopath and dope dealer. He decides who among the girls are attractive and those he despises are known as 'the rejects'.

The novel follows the fortunes of three l6-year-old pupils in this frightful place. The heroine, Alice, lives with the head- master's family since her mother's death because Poppy, her sister, is the headmas- ter's wife. She has nothing in common with her sister who is 20 years older. Poppy a devoted mother of small twins whose past is about to rock the school (shades of Dartington), is small, blonde, pretty, sexy and flirtatious. Alice, a classicist, is tall, sallow, serious, very unhappy, very intense and given to sardonic utterances. She has hated the school since her arrival there at 13 when Johnny Tore ripped off her blouse to the jeers of his friends. She dislikes boys and despises emotion that is not intellec- tually inspired. Much of the novel is concerned with her painful and reluctant subjugation to love and lust by the worth- less Winthrop T. Sheen. The often expel- led Winthrop, whose fortunes at school you also follow, is as much a reject as Alice because he is American, athletic, very good-looking, wears expensive designer clothes and talks about money. Knotshead girls prefer boys who are weedy and have bad teeth like Tore. Muscles are not cool. There is nothing particularly estimable about Winthrop except courage and by default his briefly ennobling passion for Alice. Then there is Grubb who represents normal, well-adjusted venal decency. He is a promising musician from a Hampstead background who is best friends with John- ny Tore and easily led by him. He is witness to the unfolding drama between Johnny Tore, Alice and Winthrop.

Amanda Craig writes nicely and she can tell a story well. The ghastliness of the school and pupils is amusingly satirised, the drama is genuinely gripping and Alice makes a very satisfactory heroine. The staff, on the other hand are coarsely drawn and the climax is melodramatic and uncon- vincing but this is forgivable in such an enjoyable novel. Amanda Craig went to school at Bedales.