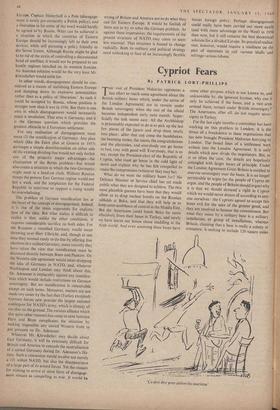 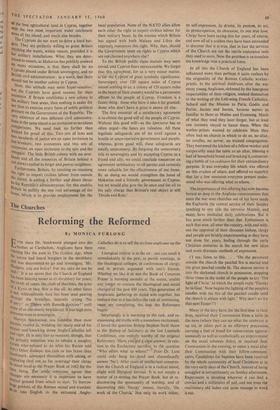 By PATRICK LORT-PHILLIPS TRE visit of. President Makarios represents a last effort to reach some agreement about the British military bases which, under the terms of the London Agreement, are to remain under British sovereignty when the rest of the island becomes independent early next month. Super- ficially the task seems easy. All the Archbishop is presumably expected to do is to pick up the last few pieces of the jigsaw and drop them neatly into place : after that can come the handshakes, the beaming smiles, the toasts, the congratulations and the platitudes, and everybody can go home to bed, rosy with good will. Everybody, that is to say, except the President-elect of the Republic, of Cyprus, who must go home in the cold light of dawn and explain why he has felt compelled to make the compromises (whatever they may be).

What do we want the military bases for? No Defence Minister or Service chief has yet made public what they are designed to achieve. The two most plausible guesses have been that they would allow us to drop nuclear bombs on the Russian oilfields at Baku, and that they will help us to keep some semblance of control in the Middle East. But the Americans could bomb Baku far more effectively from their bases in Turkey, and surely we have learnt our lesson about meddling in the Arab world. And even assuming these bases have some other purpose which is not known to, and unknowable by, the ignorant layman, why can it only be achieved if the bases, and a vast area around them, remain under British sovereignty? The Americans, after all, do not require sover- eignty in Turkey.

For fhe last eight months a committee has been working on this problem- in London; it is the threat of a breakdown in these negotiations that has now brought President Makarios hurrying to London. The broad lines of a settlement were written into the London Agreement. It is only details which now divide the negotiators. But, as is so often the case, the details are hopelessly entangled with larger issues of principle. Under the London Agreement Great Britain is entitled to exercise sovereignty over the bases. It is no longer permissible to argue (as the people of Cyprus do argue, and the people of Britain should argue) why it is that we should demand a right in Cyprus which we would never dream of according to any- one ourselves: the Cypriots agreed to accept this lesser evil for the sake of the greater good, and they, are resolved to honour the commitment. But what they mean by a military base is a military installation, or group of installations, whereas Britain, claiming that a base is really a colony in miniature, is seeking to include 120 square miles Vo dolt itre pour ottirer les. touristes:

of the best agricultural land in Cyprus, together with the two most important water catchment areas of the island, and much else besides. The Cypriots do not want to drive a hard bar- gain. They are perfectly willing to grant Britain anything she wants, within reason, provided it is for military installations. What they are deter- mined to ensure, as Makarios has publicly avowed on many occasions, is that there shall be no Cypriots placed under British sovereignty, and no British civil administration : in a word, that there should not be another colony in Cyprus.

Now, this attitude may seem hyperLsensitive; but the Cypriots have good reasons for their insistence. If Britain establishes a new colony in the military base areas, then nothing is easier for her than to exercise every form of subtle political pressure on the Government of the Republic. The very existence of two different civil administra- tions in the same island is an invitation to invidious comparisons. We need look no farther than Ireland for proof of this. Two sets of laws and two standards of justice are an open invitation to law-breakers; two economies and two sets of currencies, an open invitation to the spiv and the smuggler. The little British colony with no over- heads and all the resources of Britain behind it can always outbid its larger and poorer neighbour. Furthermore, Britain, by insisting on retaining the right to import civilian labour from outside the island, is adding a further and direct threat tothe Republic's administration; for this enables Britain to nullify the one real advantage of the bases, which is to provide employment for the

local population. None of the NATO allies allow each other the right to import civilian labour for their military bases. In the treaties which Britain has signed with both Malaya and Libya she expressly renounces this right. Why, then, should the Government insist on rights in Cyprus which are not claimed anywhere else?

To the British public these matters may seem trivial, and Cypriot fears unreasonable. We forget that this agreement, for us a very minor matter, is' for the CyPriot of great symbolic significance. Sovereignty over 120 square miles of Cyprus means' nothing to us; a colony of 120 square miles in the heart of their country would be a permanent affront to the people of Cyprqs. Freedom is a funny thing : those who have it take it for granted; those who don't have it prize it above all else.

The first essential of a satisfactory agreement is to obtain the good will of the people of Cyprus. Without this good will—as the Spectator has so often urged—the bases are valueless. All these legalistic safeguards are of no avail against a hostile or unco-operative government and people; whereas, given good will, these safeguards are totally unnecessary. By forgoing the unnecessary title to sovereignty and by accepting Cyprus as a friend and ally, we could conclude tomorrow an agreement satisfactory to all parties and certainly more valuable for the effectiveness of our bases. By so doing we would strengthen the hand of Makarios and a friendly government in Cyprus, but we would also give the lie once and for all to the ugly charge that Britain's real object is still 'Divide and Rule.'