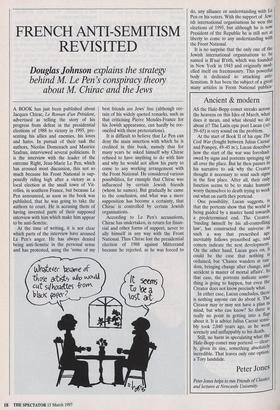 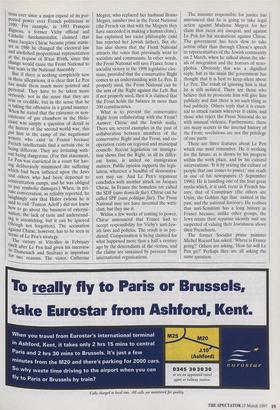 behind M. Le Pen's conspiracy theory about M Chirac and the Jews

A BOOK has just been published about Jacques Chirac, Le Roman d'un President, advertised as telling the story of his progress from defeat in the presidential elections of 1988 to victory in 1995, pre- senting his allies and enemies, his loves and hates. In pursuit of their task the authors, Nicolas Domenach and Maurice Szafran, interviewed several politicians. It is the interview with the leader of the extreme Right, Jean-Marie Le Pen, which has aroused most discussion, this not so much because his Front National is sup- posedly riding high after a victory in a local election at the small town of Vit- rolles, in southern France, but because Le Pen announced, as soon as the book was published, that he was going to take the authors to court. He is accusing them of having invented parts of their supposed interview with him which make him appear to be anti-Semitic.

At the time of writing, it is not clear which parts of the interview have aroused Le Pen's anger. He has always denied being anti-Semitic in the personal sense and has protested, using the 'some of my best friends are Jews' line (although cer- tain of his widely quoted remarks, such as that criticising Pierre Mendes-France for his Jewish appearance, can hardly be rec- onciled with these protestations).

It is difficult to believe that Le Pen can deny the main assertion with which he is credited in this book, namely that for many years he asked himself why Chirac refused to have anything to do with him and why he would not allow his party to come to any working arrangement with the Front National. He considered various possibilities, for example that Chirac was influenced by certain Jewish friends (whom he names). But gradually he came to the conclusion, and what was a mere supposition has become a certainty, that Chirac is controlled by certain Jewish organisations.

According to Le Pen's accusations, Chirac has undertaken, in return for finan- cial and other forms of support, never to ally himself in any way with the Front National. Thus Chirac lost the presidential election of 1988 against Mitterrand because he rejected, as he was forced to do, any alliance or understanding with Le Pen or his voters. With the support of Jew- ish international organisations he won the elections of 1995, but although he is now President of the Republic he is still not at liberty to come to any understanding with the Front National.

It is no surprise that the only one of the Jewish international organisations to be named is B'nai B'rith, which was founded in New York in 1943 and originally mod- elled itself on freemasonry. This powerful body is dedicated to attacking anti- Semitism. It has been the subject of a great many articles in Front National publica- tions ever since a major expose of its pur- Ported power over French politicians in 1990. For example, in 1993 Francois Bigneau, a former Vichy official and Catholic fundamentalist, claimed that when Jacques. Chirac became prime minis- ter in 1986 he changed the electoral law and abolished proportional representation at the request of B'nai B'rith, since this Change would cause the Front National to lose seats in the National Assembly. But if there is nothing completely new in these allegations, it is clear that Le Pen has made them much more pointed and personal. They have to be taken more seriously, not in the sense that they are true or credible, but in the sense that he is taking the offensive in a grand manner. When he stated that the existence or non- existence of gas chambers in the Holo- caust was simply a question of detail in the history of the second world war, this Put him in the camp of the negationist writers who exist in France because French intellectuals find a certain chic in being different. They are irritating with- out being dangerous. (For this statement, Le Pen was convicted in a court for hav- ing deliberately minimised the suffering which had been inflicted upon the Jews and others who had been deported to concentration camps, and he was obliged to Pay symbolic damages.) When, in pri- vate conversation, as reliably reported, he laughingly says that Hitler (whom he is said to call Tonton Adolf') did not know how to go about the business of extermi- nation, the lack of taste and understand- ing is astonishing, but it can be ignored (though not forgotten). The accusation against Chirac, however, has to be seen in terms of Le Pen's strategy. The victory at Vitrolles in February (well after Le Pen had given his interview 'or Domenach and Szafran) is important two reasons. The victor, Catherine Megret, who replaced her husband Bruno Megret, number two in the Front National (the French say that with the Megrets they have succeeded in making a human clone), has explained her racist philosophy (and has rejected her Jewish father). But she has also shown that the Front National attracts the votes that previously went to socialists and communists. In other words, the Front National will save France from a socialist victory in the 1998 legislative elec- tions, provided that the conservative Right comes to an understanding with Le Pen. If properly used, the Front National can be the arm of the Right against the Left. But if not properly used, then it is claimed that the Front holds the balance in more than 200 constituencies.

What is to prevent the conservative Right from collaborating with the Front? Answer: Chirac and the Jewish mafia. There are several examples in the past of collaboration between members of the conservative Right and the Front, and co- operation exists on regional and municipal councils. Recent legislation on immigra- tion shows that the Right, in all its differ- ent forms, is united on immigration matters. Public opinion supports the legis- lation, whatever a handful of demonstra- tors may say. And Le Pen's argument concludes with another attack on Jacques Chirac. In France the homeless are called the SDF (sans domicile fixe). Chirac can be called SPF (sans politique fixe). The Front National may not have invented the witti- cism, but they use it.

Within a few weeks of coming to power, Chirac announced that France had to accept responsibility for Vichy's anti-Jew- ish laws and policies. The result is as pre- dicted. Compensation is being claimed for what happened more than a half a century ago by the descendants of the victims, and the claims are sustained by pressure from international organisations. The minister responsible for justice has announced that he is going to take legal action against Madame Megret for her claim that races are unequal, and against Le Pen for his accusations against Chirac. The government has been slow to take action other than through Chirac's speech to representatives of the Jewish community on 2 March, when he talked about the ide- als of integration and the horrors of xeno- phobia. Obviously this was a dignified reply, but in the main the government has thought that it is best to keep silent about Le Pen. The result of ignoring him is that he is still isolated. There are those who believe that to prosecute him will give him publicity and that there is no such thing as bad publicity. Others reply that it is essen- tial to attack racism wherever it exists, and those who reject the Front National do so with unusual violence. Furthermore, there are many secrets in the internal history of the Front; revelations are not the privilege of one party.

There are three features about Le Pen which one must remember. He is working for the future, as is shown by his progress within the work place, and by his cultural interventions. 'It is by seizing the culture of people that one comes to power,' one reads in one of his newspapers (5 September 1996). He is handling one of the four great myths which, it is said, recur in French his- tory, that of Conspiracy (the others are Unity, the Golden Age that existed in the past, and the national Saviour). He realises that anti-Semitism has a long history in France because, unlike other groups, the Jews retain their separate identity and are suspected of valuing their Jewishness above their Frenchness.

The former Socialist prime minister Michel Rocard has asked, 'Where is France going?' Others are asking, 'How far will Le Pen go?' Perhaps they are all asking the same question.