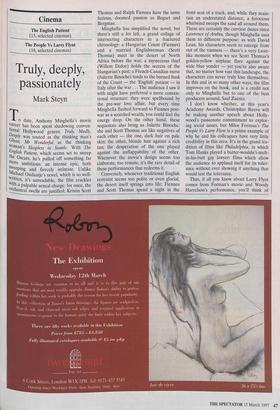 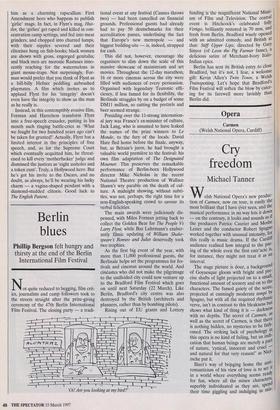 To date, Anthony Minghella's movie career has been spent shadowing conven- tional Hollywood genres: Truly, Madly, Deeply was touted as the thinking man's Ghost, Mr Wonderful as the thinking vq,°111eri's Sleepless in Seattle. With The cnglish Patient, which seems set to sweep the Oscars, he's pulled off something far more ambitious: an intense epic, both sweeping and fiercely intimate. Unlike Michael Ondaatje's novel, which is so well- Written, it's unreadable, the film crackles with a palpable sexual charge: for once, the orchestral swells are justified; Kristin Scott Thomas and Ralph Fiennes have the same furious, doomed passion as Bogart and Bergman.

Minghella has simplified the novel, but there's still a lot left, a grand collage of intersecting characters in a fractured chronology: a Hungarian Count (Fiennes) and a married Englishwoman (Scott Thomas) meet in the desert of North Africa before the war; a mysterious thief (Willem Dafoe) holds the secrets of the Hungarian's past; a French-Canadian nurse (Juliette Binoche) tends to the burned husk of the Count — the 'English' patient — in Italy after the war ... The audience I saw it with might have preferred a more conven- tional structure: they were spellbound by the pre-war love affair, but every time Minghella flashed forward to Fiennes post- war as a scorched wraith, you could feel the energy drop. On the other hand, these sequences also bring us Juliette Binoche: she and Scott Thomas are like negatives of each other — the one, dark hair on pale skin; the other, blonde hair against a rich tan; the desperation of the one played against the unflappability of the other. Whenever the movie's design seems too elaborate, too remote, it's the rare detail of these performances that redeems it.

Conversely, whenever traditional English restraint seems too polite or even glacial, the desert itself springs into life: Fiennes and Scott Thomas spend a night in the front seat of a truck, and, while they main- tain an understated distance, a ferocious whirlwind sweeps the sand all around them. These are certainly the curviest dunes since Lawrence of Arabia, though Minghella uses them to different purpose: as with David Lean, his characters seem to emerge from out of the vastness — there's a very Lean- like moment when we see Scott Thomas's golden-yellow airplane flare against the wide blue yonder — yet you're also aware that, no matter how vast this landscape, the characters can never truly lose themselves. In this and in so many other ways, the film improves on the book, and is a credit not only to Minghella but to one of the best producers around, Saul Zaentz.

1 don't know whether, at this year's Academy Awards, Christopher Reeve will be making another speech about Holly- wood's passionate commitment to explor- ing social issues, but Milos Forman's The People Vs Larry Flynt is a prime example of why he and his colleagues have very little credibility in this area. It's in the grand tra- dition of films like Philadelphia, in which Tom Hanks played a butter-wouldn't-melt- in-his-butt gay lawyer: films which allow the audience to applaud itself for its toler- ance without ever showing it anything that would test the tolerance.

Thus, if all you know about Larry Flynt comes from Forman's movie and Woody Harrelson's performance, you'll think of him as a charming rapscallion First Amendment hero who happens to publish `girlie' mags. In fact, in Flynt's mag, Hus- tler, the 'girlies' get raped and killed in con- centration camp settings, and fed into meat grinders, and chopped into charred lumps, with their nipples severed and their clitorises hung on fish-hooks; black women are shown with gross, engorged genitalia; and black men are moronic Rastuses inno- cently reaching for the watermelons in giant mouse-traps. Not surprisingly, For- man would prefer that you think of Flynt as a hill-billy Hefner peddling airbrushed playmates. A film which invites us to applaud Flynt for his 'integrity' doesn't even have the integrity to show us the man as he really is.

Instead, in this contemptibly evasive film, Forman and Harrelson transform Flynt into a free-speech crusader, putting in his mouth such ringing battle-cries as 'What we fought for two hundred years ago can't be taken for granted!' Actually, Flynt has a limited interest in the principles of free speech, and, as for the Supreme Court which eventually acquitted him, he threat- ened to kill every 'motherfucker' judge and dismissed the justices as 'eight assholes and a token cunt'. Truly, a Hollywood hero. But he's got his invite to the Oscars, and no doubt, as always, he'll be wearing his lucky charm — a vagina-shaped pendant with a diamond-studded clitoris. Good luck to The English Patient.